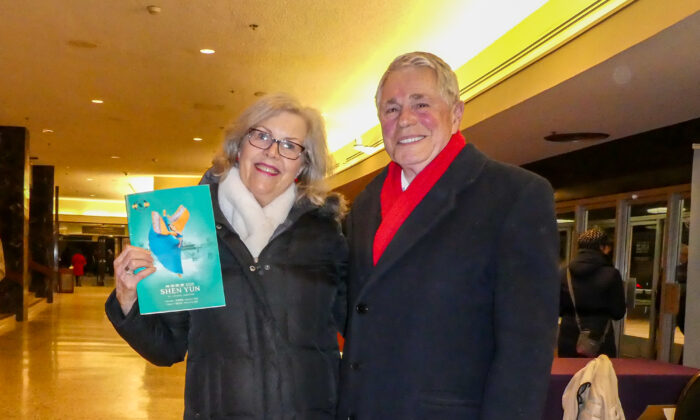 CALGARY, Alberta—Shen Yun Performing Arts is astounding the world’s cultural trendsetters on its 2020 tour. In Calgary, Alberta, on March 10, 2020, seasoned theatergoers attended the classical Chinese dance performance and praised the herculean effort undertaken by its artists to revive China’s ancient culture that was once almost lost.

‘We Love That Spirituality’ in Shen Yun

Randy Fairnie is a former manager at Imperial Oil who, with a background in mechanical engineering, oversaw Western Canada’s pipelines.

“I really love this show,” Fairnie said about Shen Yun. “I thought the choreography was really good. I love the dancing and … the mix of Chinese and Western.” Fairnie took in the New York-based production with his wife Joan at the Southern Alberta Jubilee Hall on March 10.

“I love the 3-D,” he added in reference to Shen Yun’s patented digital backdrops that leave audiences a gasp by transporting the live performers into the sky and to other dimensions. “I’m an engineer, so I love the 3-D thing that [they] had at the back. It just made so much sense. And I really thought the physical conditioning of the dancers was amazing.”

“If it was on next year or the year after, I would come again,” he added.

The Fairnies appreciated the values that Shen Yun portrayed in their 20 or so vignettes, values such as courage, benevolence, and faith in the Creator, which Chinese people have passed down since time immemorial.

“I would say the recognition of the soul and the soul’s journey is one of the stepping stones I saw,” Fairnie said.

“They seem like very Christian values to us,” said Joan, Randy’s wife. “So we love that spirituality threaded through.”

Love for Others Grows Larger

“I think that, as someone of faith, that [Shen Yun] connected in that it was saying that we are not here just as temporary beings. We have an eternal purpose, and this is much of what the Chinese culture is rooted in, in many centuries past, and it’s really nice to see that continue. And this is why I came. When we were walking in the mall and we bought tickets for this, I felt God’s voice tell me that if I bought tickets, God would give me a love for the Chinese people. And so as I sat in the audience, I could feel that love growing and it will continue to grow.”

Gillett’s impression of Shen Yun overall was that “It was beautiful! Very well done, very professional.”

“[Shen Yun] is really excellent,” Gillett continued. “I really enjoyed the content, too, because it seemed that it was really filled with meaning and they’re really trying to say something significant to us. And part of that is that there is a heaven, and there is values that are far greater than this temporary world.”

The University of Calgary’s Chief of Campus Security Brian Whitelaw was also in attendance on March 10 in Calgary and shared Fairnie’s and Gillett’s appreciation for Shen Yun’s artistry and depth of meaning.

“I think [Shen Yun] is exceptional. I think, certainly the setting, the story, the connection to Chinese culture, traditional culture, is exceptional and very engaging, very entertaining,” Whitelaw said, adding that he enjoyed the music as well as the positive values in the performance.

Shen Yun’s live orchestra is unique in the world in how it blends the classical orchestration style of the West with expressive instruments and melodies from China.

“The orchestra always makes it a great addition,” Whitelaw said, marveling at Shen Yun’s bold choice of sending a live orchestra with its company of dancers around the world. “I’m sitting close enough to the orchestra—the choreography and the music align beautifully.”

Elaborating on his comment about seeing Chinese culture, traditional culture in Shen Yun, Whitelaw discussed the courage and benevolence that had stood out to other audience members, too. “I think this is a fantastic theme to unite a show to the world that brings traditional Chinese values that are maybe hidden, or part of the old life or the old way that doesn’t get a chance for expression,” he said.

Whitelaw expressed enthusiasm for those core values which are recognized by many of the world’s people.

“It’s fantastic, the connection to, certainly, traditional values, to spiritual belief, and of course the sense of heaven, and the greater beings and the Creator, is amazing,” he said.

With reporting by Gary Bai and Brett Featherstone.