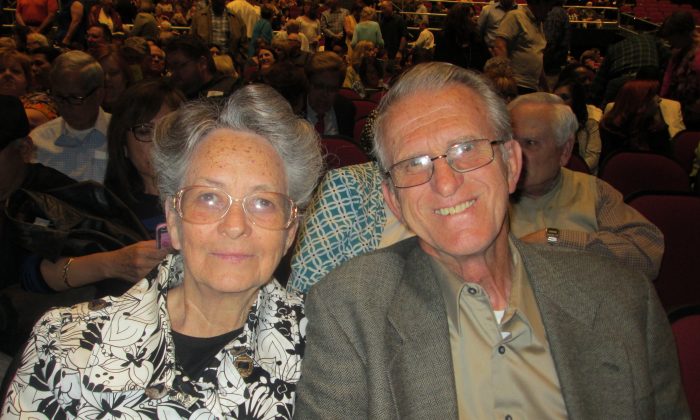 Pastor James Hodge of Apostolic Lighthouse Church with his wife, Gale, after watching Shen Yun Performing Arts at the Rabobank Theater, in Bakersfield on the evening of April 27, 2016. (Marie-Paul Baxiu/Epoch Times)

BAKERSFIELD, Calif.—James Hodge, a pastor at the Apostolic Lighthouse Church of Oildale, and his wife Gail Hodge were delighted with Shen Yun Performing Arts at the Rabobank Theater on April 27.

“I’ve really enjoyed it,” said Mr. Hodge. “Very delightful … the colors, the performances, the dance, just watching the beauty of the culture.”

The couple has been married for 52 years and are planning a trip to Taiwan and China in November and December. Mr. Hodge has also studied the Chinese culture and said the representation of Chinese people and traditional culture within Shen Yun touched his heart.

Shen Yun was founded in 2006 with a mission of reviving the authentic, divinely-inspired Chinese culture, which has a history of 5,000 years.

“Sophisticated dance techniques, an orchestra joining instruments from both the East and West, beautiful costumes, and a stunning back drop—this is Shen Yun at first glance,” says the Shen Yun website.

But when the audience takes a closer look at this unique performance, they discover the essence of Chinese culture. Mortals and divine beings come together on stage, while traditional heavenly principles such as benevolence, justice, and wisdom are celebrated through the ancient stories, timeless legends, and modern-day heroic tales depicted through the dance.

Instrumental and vocal soloists are also featured during a Shen Yun performance, with the soloist singers’ lyrics projected onto the backdrop behind them, as they sing songs of hope and faith for our generation.

The pastor felt the entire performance was inspirational, with a universal spiritual message he could connect with.