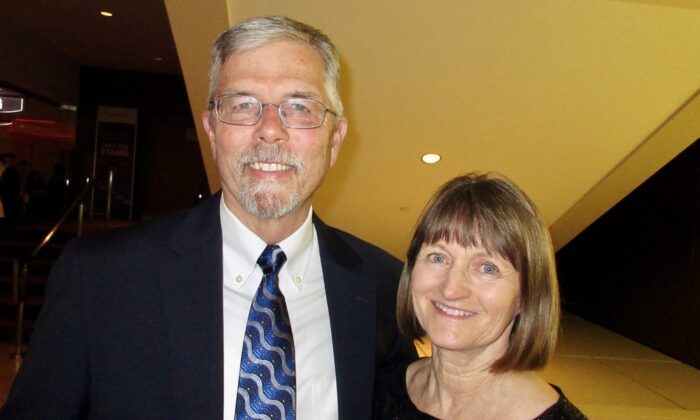 “It was great. It was really well done. And I loved all the cultural things,” Averett said.

“But I was a little reluctant to even come. I would see the ads and think ‘I don’t want to support the commies.’ I thought, I thought, [Shen Yun] was a ChiCom [Chinese communist] kind of cultural intrusion,” he explained. Averett owns and operates a business with his wife, Diann, who was also in attendance. The couple attended the show at the Cobb Energy Performing Arts Centre on Jan. 11, 2020.

Averett is not alone in mistaking New York-based Shen Yun for one of China’s clever sleights of hand. The Communist Party of China attempts to manipulate public opinion in its favor and pass off atheist communist culture (with Chinese-flavored flourishes) as Chinese culture itself by sending performance troupes around the world.

But Shen Yun is based in New York and is on a mission to revive ancient, authentic Chinese culture for the world to benefit from. They cannot perform in China today, due to the Communist Party’s destructive policies and persecution of spiritual believers.

“I didn’t know. When I would see the ads I’d think, ‘Oh, that’s just Chinese trying…’ I know they’re doing a lot of things to try and undermine our culture, make them[selves] sound really great. I knew by the time I came, that [Shen Yun] wasn’t that. But it was even more. It was a surprise,” Averett said.

“They were stunning. It was stunning. Their grace and precision and the costumes were so beautiful. I love the ones with the sleeves, the long sleeves,” Averett’s wife, Diann said referring to “Water Sleeves,” a dance by female classical Chinese dancers using silky sleeves that act a little like props with a life of their own.

“When the Mao sky fell, it was fun. You got that, kind of like a Chinese Jedi Knight,” Averett said, harking back to one of Shen Yun’s storytelling dances that depict the Communist Party’s unjust persecution against innocent people. Many Chinese believe, like they have for centuries, that retribution will come to those who do evil deeds.

“And it was amazing to see that there’s all these people going all around the world, speaking out against communism, and trying to recapture their ancient civilization,” Diann added.

It’s a civilization rooted in the divine, as Mark and Diann themselves saw.

“It seemed very similar to Judaism and Christianity in a lot of respects,” Mark said. “The divine being, the book. The renewal of all things, which is something that we recently learned more about, that in the New Testament and really throughout the Bible, God, Jesus was saying it’s a renewal of all things … how God’s going to be with man.”

The revival of an ancient culture is a theme in Shen Yun that resonated deeply with physician Sumathy Reddy, who is originally from India.

“What did I find beautiful here? The grace, the elegance, the fluidity of movement, and of course expression. I’m Indian, and I see a little bit of expression because in Indian dances, … there’s also expression along with the fluid elegance and beauty. And the costumes, oh!” she said.

Reddy said that the divine aspect of the performance was apparent to her.

“I even saw Buddha. We consider Buddha Indian. … Buddhism spread to China and different countries. So, you know, it’s peaceful, and He asks you to not be greedy,” Reddy said, about what the Buddha requests of his followers.

Reddy was accompanied by Jay Miller, also a doctor.

“In certain dances, it showed a spiritualism, if you will. Others were just fun,” Miller said.

What inspired Miller the most about Shen Yun was “the coordination, the balance, the rhythm, just the athleticism.”

“It’s very, very impressive. The coordination, the syncopation, all that, it’s so professional and so inspiring. You watch it, and you get fixed and glued to the performance. It’s very impressive,” Miller said.

With reporting by Maggie Xie, Roland Ree, and Brett Featherstone.