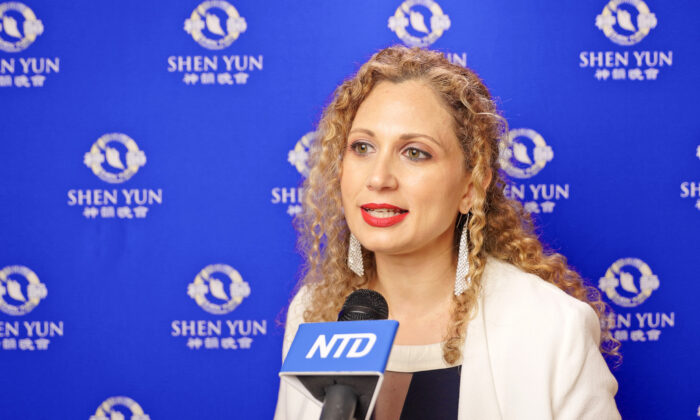 UDINE, Italy—Seeing something truly beautiful is an inspiring experience. With Shen Yun Performing Arts’ always striving for perfection with every performance, it is moving many audience members to better themselves as well.

“I congratulate them because they were impeccable, truly heavenly beings who danced. [They achieved] an almost non-human perfection. I believe they inspired us to be lightweight,” said Chiara Lo Presti, an entrepreneur and singer.

She also shared that she saw the experience of Shen Yun gave the audience a sense of being united.

“A lot of energy,” she said. “It’s a beautiful sensation of cohesion among the people, not only the artists on stage. But also this ability to convey to the audience this idea of harmony. This is something that is clear throughout the show and I think it is one of the elements that makes it so spectacular.”

“I think that the whole show sends humanity a great message, and not only to tell [Chinese] culture. It is to de-escalate mankind’s arrogance and make it (mankind) aware of how small it is compared to the creation and the universe,” said Ms. Lo Presti.

“Thus, [we need to] retrieve spirituality and [find] the right balance between mankind, nature, and the universe. I believe this is the biggest message [Shen Yun] tried to convey to us tonight.”

“The message to go back to spirituality is an important message … Actually, it’s a message that everyone should respond to, all the people in the world, each with his own religion or faith. Everyone should reclaim this spiritual dimension, because actually, it is what brings everything in this world into balance.”

The mission of Shen Yun is to revive 5,000 years of Chinese civilization—a China before communism.

“I appreciated very much that such a diversified and colorful show was created to tell a rich, ancient tradition. I believe that all the world’s people should go back to our origins because if we are telling our history, it means we are somehow losing it, we’ve been stranded. We need to go back to origins,” she added.

“Thus, [Shen Yun] gives a great example of this need to go back to our own tradition. Because by knowing who we are, we will also know where we need to go.”

“Maybe I’m a bit biased because of my singer profession, but I had the feeling it was singing rather than an instrument, almost like a heavenly voice that was singing. And these harmonious and melodic notes went straight to my heart. They gave a feeling of serenity and tranquility,” said Ms. Lo Presti.