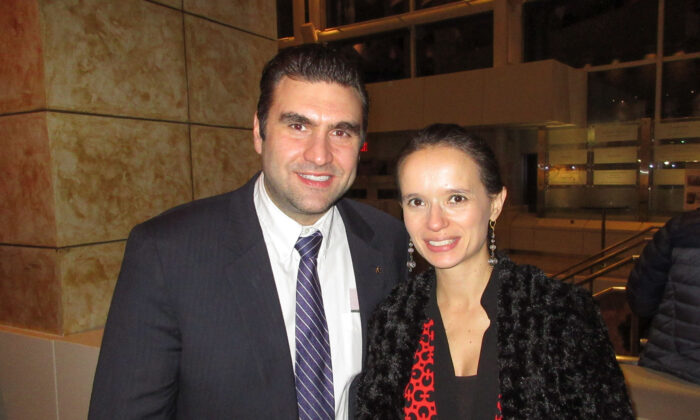 ATLANTA—After 13 years of traveling the world to grand halls such as Lincoln Center and the Paris Opera House, and after growing to include seven touring companies, Shen Yun Performing Arts’ stunning colors have not diminished, not even slightly.

Richard Taylor owns his own architectural firm, Taylor Workshop, and his wife Sarah, who accompanied him to Shen Yun, is an architect, too. The couple are both musicians in their own right.

“The opening scene was stunning, the rolling smoke coming out of the orchestra pit and the colors are very vibrant,” Richard said.

“It was really a show of colors,” said Sarah.

“And athleticism as well,” Richard added. “The format is interesting, these eight or nine vignettes, in short succession, almost like short skits in a way, keep it moving, very entertaining. Easy to watch.”

“It helps to understand the story and the traditions,” she said.

Through highly-expressive classical Chinese dance, bel canto singers, and instrumental soloists, Shen Yun aims to revive China’s ancient culture and share it with the world. Its orchestra is unique in the world for permanently combining Western orchestration with Chinese instruments and melodies.

“This was [Sara’s] Christmas gift to me and she intentionally bought orchestra seats so we can keep an eye on the cello and instruments as well as sit close to the performers,” he added, as Richard plays the cello himself.

The couple both felt a spiritual component in the show’s stories and legends.

Sarah fondly recalled the heavenly “fairies flying across the stage.”

“It was so colorful, the amount of color was exquisite. It blew me away,” said Jonathan Patterson, the co-manager of a Walmart, who attended the opening night of Shen Yun in Atlanta with his wife, Stacy.

“It was beautiful. It was almost like I was watching it by myself, in a bit of a trance,” he said.

Shen Yun is not allowed to perform its authentic Chinese art forms in China today due to the communist regime’s policies against Chinese traditions. A Shen Yun show includes content that depicts the harsh persecution that traditional spiritual believers face in China.

The Pattersons enjoyed the way, in between its short pieces, Shen Yun emcees give the audience additional context about the stories.

“How they would narrate in between, like these intermissions. I enjoyed that it makes it much more personable for the viewer who doesn’t know much about it,” Jonathan said.

Audience members take away a variety of messages from the show, for Jonathan “It seemed like overall hope—as an end result, bringing it together. I like the whole heaven and earth persona that it brought,” he said.

“What was really impressive to me was the fact how synchronized it was, with the dancers, that’s not easy to do by any means. It’s just on point … very impressive, very impressive. It was very unique, very captivating. Thank you [Shen Yun] for coming,” Jonathan added.

With reporting by Roland Ree and Brett Featherstone.