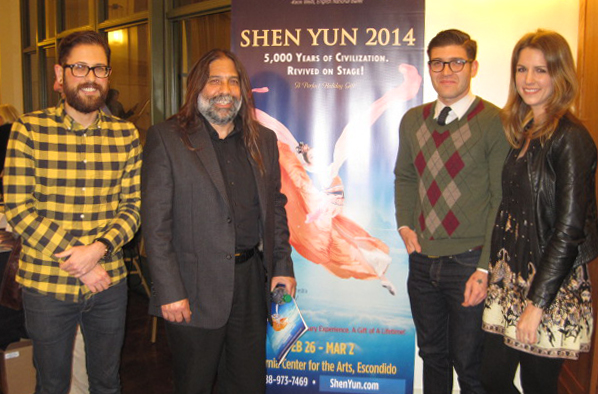 “It was definitely engaging,” said John. “It was very colorful and … what I like about it is all the music, how it uplifts the whole dancing part.”

“It was just fantastic,” John said of the Shen Yun Orchestra, which is unique in its combination of Eastern and Western musical instruments.

“It definitely has a different texture to it and that’s one of the things I really enjoy and I really notice about how the two types of instruments intertwine and sound really nice together,” he said.

The music of Shen Yun is just one part of the show, however, with the dance pieces telling the stories of China’s past and present.

How the dances were choreographed was particularly interesting to Miguel.

“It seemed like it’s very well thought out as far as how it plays with your eyes a little bit,” said Miguel. “There is a lot of expanding and contracting of the dancers, and almost it seemed like there were only a few dancers there and then all of a sudden there’s a whole stage full of them.”

Also how the whole show was arranged impressed Miguel. “I think it was seamless production. Everything flowed one part into the next. The transitions between parts were really nice. Very fluid.”

Also with the brothers was another member of the Ramirez family, Anthony, who work in optics. Along with him was Jackie Burton, who works in a brain treatment center.

“I just thought the whole thing was beautiful,” said Anthony “I enjoyed it the whole time. I didn’t get bored for once second.”

John agreed: “Usually by this time at night, I’m just about ready to go to bed. But it just kept me up. It was really nice.”

Adding the setting to each dance piece is a digital backdrop, which uses animations to bring scenes alive and even interact with the dancers.

“I really liked the vibrancy of the colors on the screen, how they complemented the colors of the costumes,” said Miguel.

“I just thought there was a lot of beauty and a lot of, it was just very tastefully done,” said Miguel, commenting on the performance as a whole.

“I would recommend that someone would go to it to really have a true artistic experience,” he said. “A lot of times these shows, they’ll rely on less intricate ways of entertaining people, but I think everything was very artistically done in this.”

John also thought the art would add to people’s lives, “I think if somebody actually had never experienced it, they’ll also get immersed in the cultural aspect of [Shen Yun] too,” he said. “If you’re a musician, or if you’re in art itself, it enhances who you are in general.”