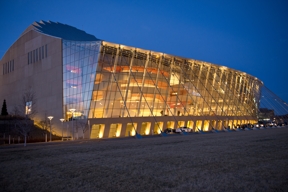 “It was amazing!” said Mr. Latinis. “It was stunning. It was very visual and captivating—loved it.”

“Actually it was quite good, and it was a good representation of history,” continued Mr. Latinis.

“So, I’ve lived in Singapore for quite some time and I lived in Asia for over 20 years. So I know a lot about Chinese history, culture. It was fantastic, well done.”

It can be very important to always keep an open mind when learning about different cultures. Mr. Latinis says that in regards to history and culture, “There’s always something new to learn.”

“We were just talking about how wonderful it was,” added Ms. Nabi. “It was a beautiful visual delight. I loved the bright colors. I am originally from northern California so there’s a large population of Chinese, and it takes me back to that time.

“I also went to Berkeley, a lot of Asians there too. I am fascinated by China, the history. So this was such a delight to see because oftentimes you’re exposed more to the politics and so to see the performances in entertainment; that was visually stunning!”

“We went through the Han and the Tang dynasty,” added Mr. Latinis. “And, I saw these representations of different parts of history were quite fascinating. But, I must admit what I really enjoyed was the choreography, the dancers—amazing.

“The costumes were great, fantastic, but it was well choreographed and it’s so much nicer to see the real human flow of this whole thing. It’s poetic, is what it is. I was impressed, very impressed,” he said.

Shen Yun portrays many different stories throughout Chinese history including everything from modern tales of persecution to days of old folk tales.

“Journey to the West, everyone loves that,” commented Mr. Latinis. “Everyone loves the trio: the monkey, the pig, and the characters, and that, because I’ve watched that for years. It was kind of a good lesson and they explained some real key aspects. It was quite interesting to the audience especially here in Kansas. You know, these things are really fascinating to people here.”

Sometimes different cultural aspects are landlocked to certain places of the world; China and Kansas are no exception. When differing cultures come together, especially for the arts, it can be very illuminating.

Ms. Nabi view explains what many Americans don’t see do due media barriers and blackouts. Even though the current economic improvement in China has raised the living standard for much of its population, spiritual groups like Falun Dafa still suffer brutal human rights violations within the current system in China.

“And I think it’s clearly where we find ourselves, added Ms. Nabi. “In this (current) time where China might be painted as sort of a political or economic bible, I think it’s great for people to be exposed to this side of China if you will. To see that it’s beyond what we perceive it. We all know that in the media sometimes things are portrayed very differently.”

One thing that makes Shen Yun stand out for many spectators is its unique backdrop and the transitions it makes with the dancers.

“Even the backdrops like Wudan and places like that, it’s very well done,” added Mr. Latinis. “So, actually in that video aspect, it was well done, well orchestrated, well choreographed so as the characters—I mean these are kind of technical details—because they came down the stage edge and then popped up so you actually have the dancer emerging right at the right moment so that was fantastic. So I enjoyed it. I’d come back again. I really would come back tomorrow if I could and bring some more family and friends and things like that.”

“Those images are all over the city so they’re posted everywhere,” said Mr. Latinis. It’s good advertisement!”

“I got tickets and then we started to see the advertisements more and more,” added Ms. Nabi. “We just got really, really excited. I am always open to exploring different cultures.”

“Actually, that’s kind of a good point because that’s what we do,” said Mr. Latinis. “The socio-cultural research aspect—that’s our profession.”