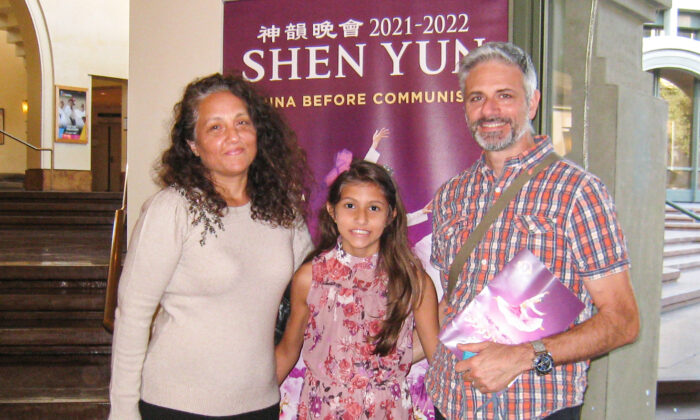 ESCONDIDO, Calif.—Shen Yun Performing Arts once again opened successfully at the California Centre for the Arts, Escondido, on Oct. 23, with many audience members pleased to narrate their joyful experiences.

“I thought, aside from the artistic beauty, it was amazing,” said program manager Preeti Carollo, who attended New York-based Shen Yun with her family. “It was educational … teaching all of us in this country about traditions that are now lost in China. I just feel like it’s a great multi-cultural experience … the beautiful expression, everything from the music to the song, to the dance to the costumes.”

Shen Yun’s mission is to revive China’s five millennia traditional culture, which has largely been lost over the last 70 years since the Chinese Communist Party came to power.

While traditional stories are told through classical Chinese dance and music, the audience also enjoys dances from China’s many colorful ethnic groups.

“I really enjoyed the brilliant colors and the flow of the skirts and the different patterns. The clothing, the costumes were really wonderful,” business consultant Stephen Carollo said.

Prior to attending Shen Yun, Preeti said she knew nothing about China’s regional cultures. “But to actually learn about it, the diversity within the continent and the traditions is really beautiful,” she said.

Stephen added, “I was surprised and somewhat delighted to see [the] expression of modern times intermixed with the ancient times. I thought that was really interesting, especially with the interplay with the three-dimensional backdrops.”

Shen Yun’s range of dances includes the portrayal of the modern-day persecution of the spiritual group Falun Dafa, whose teachings are based on the eternal values of truthfulness, compassion, and tolerance.

Sherri Engler, a health department project manager, was mesmerized by the synchronization of Shen Yun’s performers.

“I am fascinated to see how they [Shen Yun] use the costuming to flow with all the movement and the artistry. The colors are vibrant and captivating. I think it’s just interesting to look … through the lens of the Chinese and think that they can’t even see this—they can’t even see this kind of performance that we can here in the United States. That’s very eye-opening and keeps you very conscious of what … blessings … we have here,” Engler said.

Engler was very enthusiastic about Shen Yun’s aim of reviving China’s ancient traditions. “I love that fact that they’re showing [this] because I am against communism and the oppression of freedom, and I love that they are expressing what they believe and [they] have that right!”

“I am a person who believes in God and Christ in Heaven, and I love the tie, how [Shen Yun portrays] a spiritual being who came to earth to bring salvation,” she said.

The performance was spectacular, said Robert Morley, a retired Methodist minister, who said he was particularly impressed by Shen Yun’s perfect synchronization. He also felt that the impact of Shen Yun was huge. “I think there is now a very strong renewal of interest in spirituality,” he said.

Chinese traditional culture is based on spirituality and the teaching of moral values. Ancient Chinese believed that there was a divine connection between the heavenly gods and sentient beings. For Morley, Shen Yun explores many spiritual questions.

“Now, we’re starting to see …  my goodness, What if there’s power and mystery and spiritual realities out there that we haven’t even begun to tap in? And what if some of those are within us?” he asked.

“And so these kinds of performances, that bring to light the ancient traditions, which are basically spirituality expressed through movement, dance, I think is wonderful. And besides that, we just all need some beauty in our lives,” he said.

“So I am very moved. I’ve had a transcendent experience.”