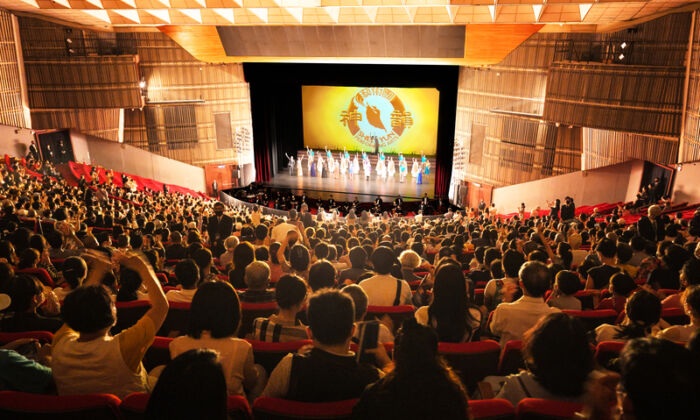 Ms. Pitts also said she learned more about the treasures of classical Chinese dance and Chinese traditional culture. She also enjoyed the unique backdrop which interacted with dancers’ movements and vividly combined the virtual and real.

“You won’t know what you missed in your life if you haven’t seen [Shen Yun],” Ms. Pitts commented. “The show brings people beautiful art, vitality, and happiness, as well as humankind’s universal values. Each of us can relate to Shen Yun.”

The full house included many dignitaries. Some of the audience members dressed in traditional Chinese attire or ethnic dresses to attend the performance, showing their respect and appreciation for Shen Yun.

Taiwan was the last stop of Shen Yun International Company’s tour this season. The presenters arranged extra seats and additional performances but it still wasn’t enough to meet the demand.

‘All Shen Yun programs are impressive’

Ambassador Lu Ching-long said Shen Yun can improve audiences’ immunity, which is important during the pandemic.

“Facing the epidemic, people are nervous and even scared. Shen Yun’s dances are very life-like. It can calm down the people and relax our souls,” said Mr. Lu, a veteran diplomat and former Taiwan representative to France. “When our hearts relax, we can receive more positive energy from the performance. It can improve our overall health, including body, mind, and soul.”

Mr. Lu sang high praise for the traditional values that Shen Yun presented. “We, the Taiwanese government and the people, cherish the tradition and history.”

Miguel Magalhães, director of the Commercial Office of Brazil in Taiwan, watched Shen Yun and said: “This is the most fascinating show I have seen in Taiwan. I’m very happy now. All Shen Yun programs are impressive. I enjoyed every moment!”

Magalhães said good arts can bring people hope. Shen Yun is good in culture, art, color, and all the other aspects.

‘It’s a visual and auditory feast’

Calligrapher Hung Chi-I is famous in both Taiwan and Mainland China. He said he was moved by Shen Yun.

“The performance is grand. I even can’t find a word to describe it. I feel moved and cheerful,” Mr. Hung said. “Shen Yun presents the good parts of China’s 5000 years of culture. It’s a visual and auditory feast we Taiwanese people are very lucky to enjoy.”

“People are key when inheriting a traditional culture. I can imagine the difficulties that Shen Yun overcame in finding so many talented people and training them to become great artists.” Mr. Chang said.

Shen Yun ‘Made Me Happy’

“I really love the show,” Mr. Zuttioni said. “The Chinese culture that [Shen Yun] presented is very beautiful. The music is very romantic and nice with the combination of Western and Chinese instruments.”

Mr. Zuttioni appreciated that Shen Yun made people think about the gods, the creator, and traditional values. “In Italy, we have similar legends and myths,” Mr. Zuttioni said. “The show made me happy.”

“I learned from Shen Yun that we should make good use of our time, and only spend time on meaningful things, which can make the world into a better one and help people around us,” Entrepreneur Chen Yung-teng said. “I feel the perseverance, insistence, and patience from Shen Yun.”

Mr. Chen said the positive energy that he received from Shen Yun encouraged him to do good deeds and be confident when facing troubles and hardships.

“I accumulated this positive energy in my body. In the future, recalling the show will uplift me,” Mr. Chen added.