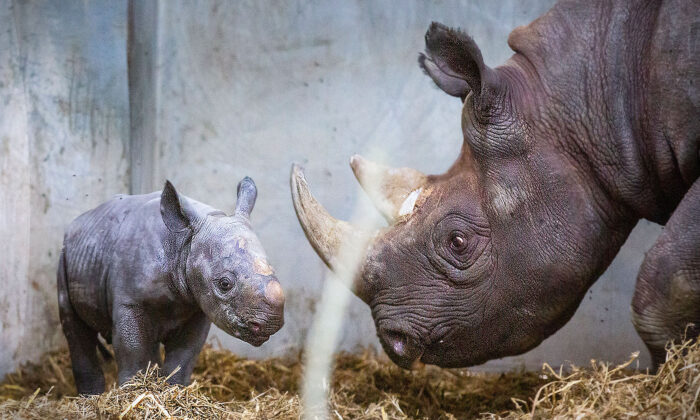 Two critically endangered eastern black rhinos have welcomed a new baby at a British zoo—the only such calf born in Europe this year.

The adorable rhino calf could be seen walking around his enclosure and suckling on his mother just hours after he was born.

Managers at Flamingo Land Zoo confirmed this was the only birth of an eastern black rhino in Europe this year, with just 3,600 left in the wild in Tanzania and Kenya.

“We have waited so long for this. Both mum and baby are doing incredibly well, and I am so proud of Samira and all her keepers,” head keeper Sam DeBelle said.

“This success represents eight years of planning for the team and working collaboratively with our partners across Europe,” zoo manager and park executive Ross Snipp said.

He added, “All new births are exciting, but there is added significance for this one, both for us and the global population.”

Following the birth, Flamingo Land owner Gordon Gibb said, “This is the first time a black rhino has been born in Yorkshire, and with only approximately 3,000 black rhinos left in the wild, it continues our vitally important conservation work at home and abroad.”

In 2019, the zoo released a female rhino, Olmoti, into Akagera National Park in Rwanda as part of the largest translocation program of rhinos from Europe to Africa in the world.

Flamingo Land plans to release another rhino, Chanua, into a park in Tanzania soon, with the possibility of the new calf following in their footsteps.