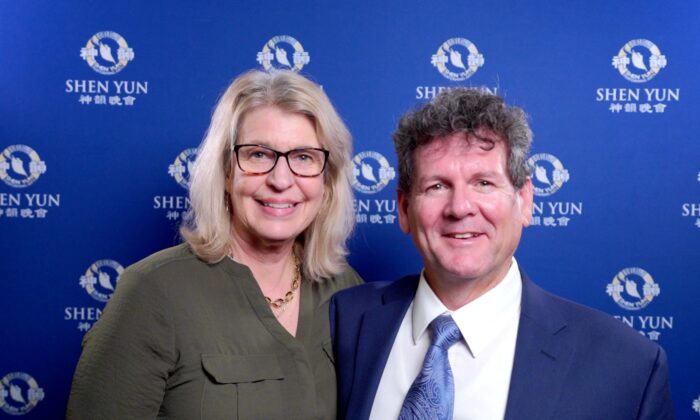 FRESNO, Calif.—Of Shen Yun Performing Arts‘ more than 1 million audience members to date, many report that the performance from the New York-based classical Chinese dance company moved them to tears.

“I loved it. I’ve been wanting to see this for a number of years and it exceeded my expectations. It was beautiful. It was just lovely. It brought me to tears several times. I laughed, I cried. It was, it was really a wonderful experience,” she said.

Shen Yun’s roughly 20 short vignettes that comprise one of their performances include ethnic and folk dances, story-based dances, and classical Chinese dance that contains inner bearing, techniques, and movements unique to that art form. The company’s mission is to revive ancient China’s traditional and divinely-inspired culture and share it with the world.

I just love the way the dancers use their bodies to create this entire world that you’re in briefly.
— Jan Williams

“I loved the storytelling,” said Williams, who has appeared in 20 films and television episodes according to IMDB and who also works as a voice-over actor. “Those are probably my favorite pieces, were the ones that told the stories. I just love the way the dancers use their bodies to create this entire world that you’re in briefly. And it was, it was wonderful. They’re wonderful actors as well as wonderful dancers.”

“It was beautiful. There was one story, in particular, that was just quite funny … we were all laughing a lot. But there were other stories that were very sweet … and then just sometimes just the beauty of the costumes and the movement and the dance, and the music all combined. It was quite overwhelming, at times was lovely,” she added.

In order to carry on ancient China’s rich traditions, Shen Yun artists weave themes of divine beings and heavenly kingdoms into their dances and songs. Since time immemorial, Chinese people have believed that the world was created by the divine, that the Creator still has a hand in everyday life, and that He will one day return to earth for all mankind.

Williams and her husband described Shen Yun’s spiritual aspect and its revival of culture with a word.

“I very much agree with my husband, I think the word ‘depth’ is what he said and there is a depth of culture that we don’t have in the West. And it’s something that we haven’t really learned that much about,” she said.

“I feel like, especially in my lifetime, there’s been kind of a block [in China], to learning a lot of those things. So I think this is amazing that Shen Yun is going around and giving people a taste of that and teaching us … I need to go do some research now, after watching the show. I’m like, wait a minute, okay. I didn’t even know about some of what was going on in there. And it was wonderful.

“I’m so happy for it. I love knowing that that’s going on because I think so much was lost since communism came in [to China]. By my understanding … I don’t know all of it, but … the arts were very limited and what they were able to perform and do. And so it’s just amazing that [Shen Yun] is bringing this back! Because it is truly beautiful and truly amazing to watch and see. So I’m really grateful.”

Shen Yun is not allowed to perform in China due to a decades-long campaign by the Chinese Communist Party to wipe out traditional Chinese culture. Along with that, the Party abducts, interrogates, and even tortures spiritual believers. Shen Yun portrays such real-life scenes now taking place in China, and the heroic ways in which kind-hearted bystanders and believers are responding to such mistreatment with compassion and faith.

There was a lot of spirituality in [Shen Yun] that I didn’t expect and it was lovely!
— Jan Williams, actress

“There was a lot of spirituality in [Shen Yun] that I didn’t expect and it was lovely!” Williams said. “It was really meaningful and came across really well. And it was something I wasn’t familiar with from what I knew about China, so it’s great.”

Shen Yun’s seven touring groups each travel with their own live orchestra that accompanies the dancers. Each year they stage an all-new show that keeps fans coming back again and again.

“Just to me personally, it was an incredibly moving experience for me to get to know some of the culture that I didn’t even know existed from China. It, just very, very moving for me,” Williams said, adding a note of gratitude to the organizers of the evening and to Shen Yun’s artists themselves: “Thank you. Thank you for having this!”