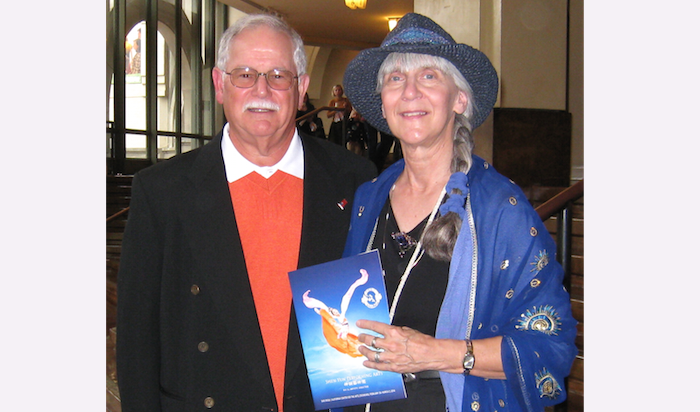 Among the sold-out audience in attendance watching Shen Yun were Doug and Mary Nolfi. Mrs. Nolfi is an artist and an accomplished crochet designer artist who owns an online business of designing, publishing, and selling crochet patterns.

Independent and nonprofit, New York-based Shen Yun was established in 2006 by artists from around the world with the mission of reviving China’s divinely inspired traditional Chinese culture, which had nearly been completely destroyed by the current regime in China over the last several decades.

For eight years, New York-based Shen Yun has been touring around the world. “Millions have seen Shen Yun. Standing ovations at the world’s top venues, royalty attending in Europe, sold-out shows throughout North America, and packed houses across Asia have made Shen Yun an international phenomenon,” according to the Shen Yun website.

Mrs. Nolfi was deeply inspired by Shen Yun. “The story is wonderful! Absolutely! It’s what we are all beginning to understand about life altogether. And China has had a handle on it for 5,000 years,” she said.

“How we are all recognizing the spiritual side of life. And we are becoming more enlightened to this. This is definitely a story about enlightenment as far as I can see,” she said.

Mr. Nolfi explained, “It’s all part of one total creation. We like think to think we are different, but it is not true.”

According to the website, “Through the universal language of music and dance, Shen Yun weaves a wondrous tapestry of heavenly realms, ancient legends, and modern heroic tales, taking you on a journey through 5,000 years of Chinese culture. Its stunning beauty and tremendous energy leave audiences uplifted and inspired.”

At the core of a Shen Yun performance is Chinese dance, which is “known for its incredible flips and spins, and its gentle elegance, it is one of the most rigorous and expressive art forms in the world,” the website explains. “Art was meant to uplift, bringing joy to both the people who created and experienced it. It is this principle that drives Shen Yun performers and their art.”

“The thing that is amazing here is the athleticism and the artistry at the same time create the beauty in both men and women. It’s amazing!” she said.

Helping them thoroughly enjoy the performance, the Nolfis appreciated the emcees and the program book. “I read the program before, and it was nice that we read that before,” said Mrs. Nolfi. “Having the speakers come out and explain is very helpful also.”

“Amazing! The waves and things that happen there that fade in the back and come forward. It’s unbelievable!” he said. “You could see why it is so popular.”