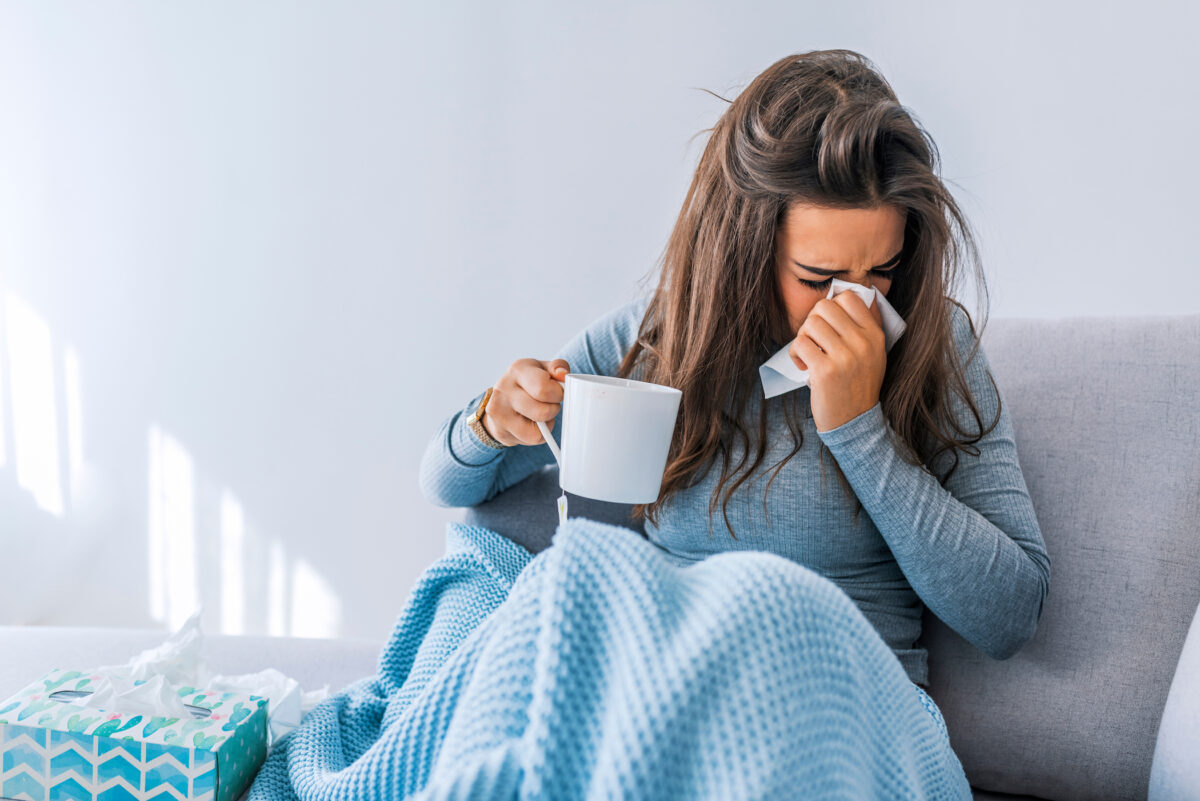 Researchers recently made a very interesting discovery: With enough NK cells in your system, you will not contract influenza.  By Dragana Gordic/Shutterstock
Wellness

A Flu Bug’s Worst Enemy, It Chews Them Up and Spits Them Out

Bump your levels of this to above 10% and you’ll make your body virtually flu-proof – causing these cells to basically chew up and spit out any infected cells it is in contact with. Here are 9 simple ways to ramp up your levels.

Natural killer (NK) cells, a specific type of white blood cell, are an important component of your innate immune system. Your immune system consists of two different branches — cell-mediated immunity (innate) and humoral immunity (adaptive). When you contract a viral disease, the pathogen enters your body and infects your cells.

The subsequent disease process involves your cell-mediated immune response, which activates your NK cells, along with chemicals that attract them to the site of infection, where the white blood cells basically chew up and spit out the infected cells. This process clears the virus and rejuvenates the gel-like water inside your cells.

On a side note, naturally acquired herd immunity in a population comes into play when a very high percentage of individuals have gone through this sequence of cell-mediated and humoral immune response. This sequence is not followed during vaccination, which is why vaccine-induced “herd immunity” is a misnomer.

NK cells are involved in both viral disease and diseases such as cancer and autoimmune conditions. As explained in one 2008 paper on the functions of NK cells:

Although NK cells might appear to be redundant in several conditions of immune challenge in humans, NK cell manipulation seems to hold promise in efforts to improve hematopoietic and solid organ transplantation, promote antitumor immunotherapy and control inflammatory and autoimmune disorders.”

NK cells are cytotoxic, meaning they’re capable of killing cells. Tiny granules in the cytoplasm contain granzymes — special proteins such as perforin and proteases. Perforin, hinting at the functional basis of its name, perforates the cell membrane of the cell targeted for elimination, allowing the proteins and other chemicals to enter, thereby inducing apoptosis (programmed cell death) that destroys the virus along with the infected cell.

In this manner, NK cells — which are not antigen-specific — contain the infection while your adaptive, humoral immune response generates T cells containing antigen-specific cytotoxins to clear the infection. Put another way, the NK cells keep viral replication in check while the adaptive arm of your immune system “learns” the properties of the virus and creates antibodies to match.

Since NK cells have the ability to differentiate between normal, healthy cells and abnormal cells, such as those infected by a virus or that have turned cancerous, scientists are looking for ways to enhance NK cell function as a way to improve the effectiveness of cancer treatments. The good news is there are many ways to boost the number and function of your NK cells, which I’ll review below.

With Enough NK Cells, You Become Impervious to Influenza

Researchers recently made a very interesting discovery: With enough NK cells in your system, you will not contract influenza. As reported by Live Science, a specific gene called KLRD1 “could serve as a proxy for a person’s levels of natural killer cells.” KLRD1 is a receptor gene found on the surface of NK cells, and the level of KLRD1 found in a person’s blood prior to exposure to the influenza virus was able to predict with 86% accuracy whether that individual would contract the flu.

According to senior study author Purvesh Khatri, associate professor of medicine and biomedical data science at Stanford University School of Medicine, KLRD1 is “the first biomarker that shows susceptibility to influenza, across multiple strains.” As reported by Eurekalert:

It’s a fine line, Khatri said, but the distinction between the groups is quite clear: Everyone who had 10 percent or more natural killer cells stood strong against the infection and showed no symptoms. Khatri said his findings could help health professionals understand who’s at the highest risk for flu infection.”

Ways to Boost Your NK Cells

While the researchers hope their findings may help develop more effective flu vaccines, you don’t need drug intervention to boost your NK cells and hence your protection against virtually all viruses and malignancies.

NK cells tend to lose functionality as you age, leaving you more susceptible to disease, including viral infections such as influenza and cancer. The medical term for this degeneration is “immune senescence.” The good news is you can counteract this decline in a number of different ways, including the following:

Consume enzymatically modified rice bran (EMRB) — EMRB is produced by exposing rice bran fiber to enzymes isolated from the shiitake mushroom. In one 2013 study, a rice bran product called MGN-3 increased NK cell activity by as much as 84 percent in patients with multiple myeloma after three months of treatment. In an earlier study, old mice injected with EMRB had a fivefold increase in NK cell activity within two days.

Use cardamom — A relative of turmeric, known for its potent immune-boosting benefits, cardamom increases NK cell activity. A 2007 study found cardamom inhibited colon cancer by preventing cellular damage caused by the accumulation of toxins and various waste products in the colon.

This tasty spice also has strong antioxidant and antimicrobial activity, effectively inhibiting E. coli, Staphylococcus aureus and Pseudomonas aeruginosa, the latter of which is a common source of hospital-acquired infections.

Add black pepper to your food — Like cardamom, black pepper has also been shown to enhance the cytotoxic activity of NK cells and promote healthy immune function.

Take a colostrum supplement — Colostrum is milk produced within the first 24 to 48 hours of giving birth. Colostrum from cows is very similar to human colostrum, and colostrum products are typically derived from cows. The colostrum contains an array of immune and growth factors required by the offspring.

In a 2012 study on mice, oral administration of skimmed and concentrated bovine late colostrum was shown to activate the immune system and protect against influenza infection by boosting NK cell activity.

Another 2014 animal study concluded that, “Colostrum supplementation enhanced NK cell cytotoxicity and improved the immune response to primary influenza virus infection in mice.” Colostrum-supplemented mice that did contract the flu also had less severe infection and a lower viral burden in the lungs compared to controls.

An earlier study, published in 2007, found treatment with oral colostrum for two months prevented influenza infection three times more effectively than influenza vaccination. According to the authors, “Colostrum, both in healthy subjects and high-risk cardiovascular patients, is at least three times more effective than vaccination to prevent flu and is very cost-effective …”

Eat mushrooms — Mushrooms such as shiitake, maitake and oyster mushrooms, also boost NK cell activity courtesy of beta-glucans, a polysaccharide known for its immune-boosting and cancer-fighting activities. As noted in a 2007 study in the journal Medicina:

They can prevent oncogenesis due to the protective effect against potent genotoxic carcinogens. As [an] immunostimulating agent, which acts through the activation of macrophages and NK cell cytotoxicity, beta-glucan can inhibit tumor growth in promotion stage too.”

Overall, AHCC has been suggested to enhance prognosis and quality of life in a variety of cancers, as well as to elicit potentially positive changes in cytokine production and lymphocyte populations — most notably increased NK cell activity.”

Take melatonin — Melatonin, a neurohormone produced by your pineal gland, is a well-recognized modulator of cancer risk. As noted in a 2006 paper on melatonin’s role in immune system enhancement and its applications in cancer:

“Physiologically, melatonin is associated with T-helper 1 (Th1) cytokines, and its administration favors Th1 priming. In both normal and leukemic mice, melatonin administration results in quantitative and functional enhancement of NK cells, whose role is to mediate defenses against virus-infected and cancer cells.

Melatonin appears to regulate cell dynamics, including the proliferative and maturational stages of virtually all haemopoietic and immune cells lineages involved in host defense — not only NK cells but also T and B lymphocytes, granulocytes and monocytes — in both bone marrow and tissues.”

A 2005 paper also stressed the importance of NK cells in aging and longevity, noting that “Longer life in centenarians has been associated with increased NK cell number,” and, “The cytotoxic capacity of NK cell is well preserved in peripheral blood of the centenarians.”

This paper also discusses the immunoregulatory action of melatonin on your innate immune system, and that exogenous melatonin (melatonin supplementation) “augments NK cells and monocytes in both the bone marrow and the spleen with a latency of [seven] to 14 days.”

Boosting Your Innate Immunity Is Your First-Line of Defense

I’ve often stressed that boosting your natural immune function is a key component of health and disease prevention, and this is particularly true during flu season. As recently discovered, once your NK cells reach a certain threshold, which appears to be right around 10 percent, you will not get the flu even if you’re exposed to flu viruses.

This is in large part why seniors are more prone to influenza and other infections. They’re also more susceptible to cancer, and NK cells play a very important role in tumor prevention as well. So, in addition to optimizing your vitamin D, consider eating more of the NK cell-boosting foods listed above. Doing so could go a long way toward circumventing influenza and other infections.

This article was previously published by Mercola.com June 25, 2018, and has been updated with new information.