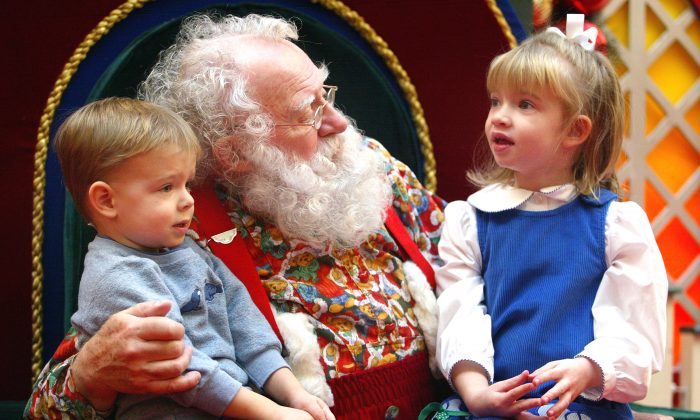 NILES, IL - DECEMBER 19: Sporting a natural white beard, Santa Claus visits with Ian, 2, and sister Devin Rachiele, 4, December 19, 2003 at Golf Mill Mall in Niles, Illinois. Santa says that the children that visit him feel more comfortable when he is not wearing his traditional Santa coat and hat. (Photo by Tim Boyle/Getty Images)
Good to Know

12 Heartbreaking Things Kids Have Asked From Santa for Christmas

Kids say the weirdest things sometimes, but not all of them are thoughtless.

Here are some of the ones mall Santa’s have heard from kids and shared via Reddit.

1. One was a young girl who told me that her parents would take care of her presents, so would I mind giving the gifts I had for her to a poor kid? I told her I would, because honestly, what else can you say?

2. When I was a freshman in college, I got a gig as a mall santa at a smaller local mall. A little girl came up to me and sat on my lap. I asked her in the most jovial way what she wanted for Christmas. She pulls out a picture of her dead dog and says “Can you bring my dog back?” The look on her face when I said no was heartwrenching.

3. My daughter asked Santa for me to have a baby this weekend. Everyone laughed and thought it was super cute but it made me feel so bad. My boyfriend died recently and all her friend’s mothers are married and pregnant. She wants to be a big sister so badly.

4. This kid asked for his fireplace to be cleaned. When my friend asked why the kid wanted that he said “‘Because if Santa lands in a fire he’ll die, and then I can take all of the presents in his sleigh!”

5. An 8 year old boy asked to Santa (my grandpa) a disease for his mom. Yeah that’s right, he wanted his mom dead.

6. Kid at the front of the line yells to his mom, so everyone in the mall can hear, “Mom, can I ask Santa to use his special magic to get dad out of jail?” But when he got on my lap he asked for a car.

7. My dad is a mall Santa and he says that today a kid asked him to let his dad out of jail because all his dad did was grow plants in their backyard.

8. Kid asked for Santa to kill his friend. He was like seven. All he did was not share his Power Ranger toy.

9. For daddy to come home from the desert. When he asked, I looked at his mom and the look on her face was sad and she shook her head “no”. So I just told the kid that daddy loved him very much and wished him a Merry Christmas.

10. “Hi Santa, can you help my sister see her presents? Her eyes don’t work.”

11. The most heart-wrenching story was a little girl, about 7 or so, who was staying with her dad and step-mom because her mommy was deathly ill in the hospital. She came and saw me every day that I was there and she just wanted to talk to someone she knew could really understand where she was coming from in her fear. She hoped that she could come visit the North Pole, but understood if it wasn’t possible.

12. My dad did it at Macy’s for a few years. He told me about one little kid (somewhere between 4 and 6) whose mother was there and obviously going through chemotherapy or something. Kid said all she wanted for her mommy to feel better.