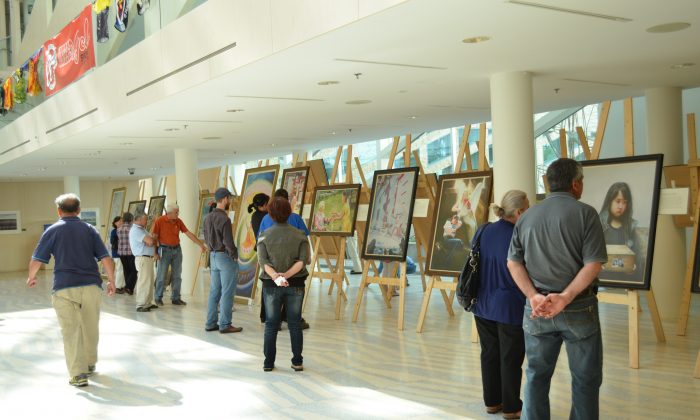 The Art of Zhen, Shan, Ren International Exhibition opened in Edmonton on Aug. 25 with a warm welcome from city officials.

The exhibition, which depicts the inner spiritual life and the human rights tragedy of practitioners of Falun Gong, a spiritual discipline persecuted in China, will be on display at Edmonton City Hall until Aug. 31.

“The inspiring exhibition today has travelled more than 50 countries since 2004, touching many lives and uniting individuals with a common story,” Mr. Anderson said at a reception on Monday.

“We are blessed today to have the chance to witness their stories through Chinese arts and gain appreciation for the history and discipline of the Falun Gong which is based on principles of truth, compassion, and tolerance.”

According to Professor Zhang Kunlun, one of the artists whose paintings are displayed in the exhibition, the artworks come “from a pure heart” and reflect the artists’ personal experience.

“The art reveals the strength, perseverance, and beauty of practitioners of the spiritual discipline of Falun Gong,” Mr. Anderson added.

“It portrays the tragedy of persecution, but also the tremendous hope, spirit, and revival of the people affected by it.”

Falun Gong, also known as Falun Dafa, was first introduced to the public in 1992. From 1992 to 1999, the practice attracted approximately 100 million people in China.

In July 1999, the Chinese communist regime banned Falun Gong and began a campaign of persecution against its practitioners.

Since that time, hundreds of thousands of Falun Gong practitioners have been detained in jails, forced labour camps, and mental hospitals, where they are subjected to extreme torture.

“Spiritual belief has always been a target for the Chinese communist regime, as it promotes unity, independent thinking, and a strong moral code, all of which makes it harder to control people,” explained event host Justina Wheale.

“When the regime discovered that so many people were practicing Falun Gong, they became afraid that the practice would become a threat to their totalitarian system of control,” she said.