You’ll Regret it if You Miss Shen Yun 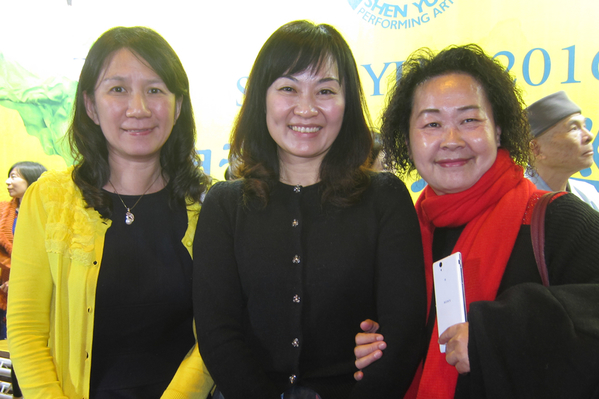 KAOHSIUNG, Taiwan—Attending for the fourth year, Kaohsiung City Councilor Chen Lina was fascinated by the performance presented by Shen Yun Performing Arts World Company at Kaohsiung Cultural Center on the evening of March 24, 2016. “It’s a delightful performance with superb craftsmanship. I have different feelings when seeing it at different times,” Councilor Chen said.

Ms. Chen expressed that she especially loves the performances that have moral implications like those of “benevolence, righteousness, propriety, wisdom and honesty,” she said.

“Many legendary stories are very inspiring. In the era when people’s values are getting worse, traditional Chinese culture is especially important,” she said. “These traditional values cannot be wiped out from our heart, as they are an important stabilizer of our society.”

Talking about the first program, “Fairies of the Sea,” in the second half of the performance, Chen said that the fans were very beautiful, and the performers’ dancing skills were exquisite. They must have undergone a rigorous training, so that they can achieve such a high level of performance.”

“It’s a delightful performance with superb craftsmanship. Not only are the dances very pleasing, but the orchestra’s performance is magnificent as well,” she said.

“You’ll regret it if you miss it,” she said.

Biyoung Biotechnology company’s general manager Chen Jianan, the winner of nine gold medals in international invention competitions, also attended the Shen Yun show at Kaohsiung Cultural Center on the evening of March 24, 2016. He had a truly beautiful and amazing time.

Enjoying Shen Yun show for the first time, Chen said he was used to seeing modern show, but was delighted to see a performance of traditional Chinese culture. He felt the overall performance was exquisite, mentioning both the costumes and plots of the story-based dances.

He also enjoyed the backdrop, have never seen a digitally animation work seamlessly with stage performers.

Chen highly spoke of Shen Yun’s objective of reviving the 5,000 years of the orthodox Chinese culture and said the dances and music broadened her horizons.

Referring to a specific dance, “Poets of the Orchid Pavilion,” Chen Jianan said it was very special. The whole poem by Wang Xizhihe complete and its cultural connotations were displayed on the stage, which was new for her. “And after seeing this program, I feel like studying those poems. I’ll take a look at them right after going home,” she said.