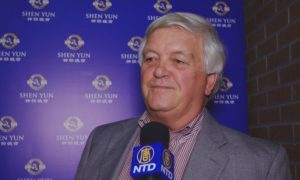 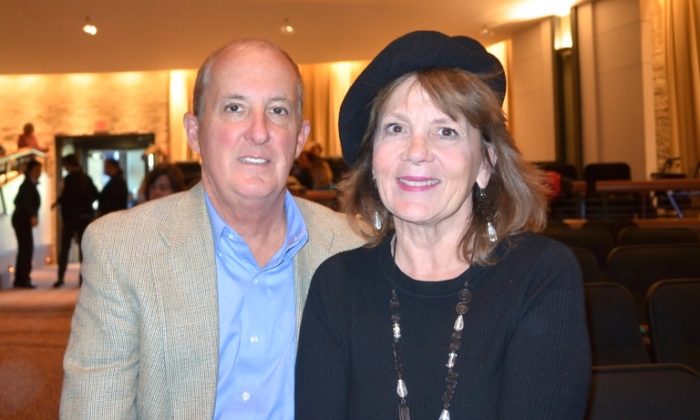 Dr. Timothy Lightfield and his wife, Deborah, attended the Shen Yun matinee at the Lazzara Performance Hall inside the UNF Fine Arts Center on Jan. 25., 2015. “I marveled at their abilities,” Mr. Lightfield said of the performers. (Qingqing Qiu/ Epoch Times)
Company

JACKSONVILLE, Fla.—Shen Yun Performing Arts’ presentation of classical Chinese dance and music evoked memories for Dr. Timothy Lightfield and his wife, Deborah. The couple attended the matinee at the Lazzara Performance Hall inside the UNF Fine Arts Center on Jan. 25.

Something they had in common when they first met each other was that they had both been to China. Mrs. Lightfield said, “So this is important for us to see.”

Mrs. Lightfield is an artist and an arts teacher at the Jones County School in Jacksonville. Her husband is a retired college president.

Shen Yun was founded in New York in 2006 by a group of talented artists with a mission to revive 5,000 years of divinely inspired Chinese culture, almost destroyed by 65 years of communist rule.

Now in its ninth season, by the end of its 2015 world tour, Shen Yun will have visited more than 100 cities the world over and touched millions of theatergoers.

Just how Shen Yun has made its mark is conveyed on its website: “Sophisticated dance techniques, an orchestra joining instruments from both the East and West, beautiful costumes, and a stunning backdrop—this is Shen Yun at first glance. But digging deeper, one discovers a sea of traditional Chinese culture. Mortals and divine beings merge on stage as one.

“Principles such as benevolence and justice, propriety and wisdom, respect for the heavens, and divine retribution, all come to life, washing over the audience. Originating from Confucianism, Buddhism, and Taoism, these ideals are the essence of traditional Chinese culture.”

Mrs. Lightfield said, “I think it is exciting that the culture is staying alive and that it’s being shared by so many people.”

She has a passion for China and would love to return one day simply because of the country’s beauty, she said. Her home is furnished with Chinese décor, and she regretted not having worn a Chinese necklace her husband had given her.

As an artist who enjoys painting people, she describes herself as “very embracing of different cultures.”

She took delight in the shapes and patterns of the radiant costumes as they flowed and moved in synch with the dancers’ movements.

“I like the combinations of the colors, too. The first piece with the long sleeves [Sleeves of Grace] seemed to be very vibrant colors that reflected nature. Beautiful! We enjoyed it very much.”

Mr. Lightfield was most impressed with the technique, the style, and the grace of the performers.

“I marveled at their abilities. … It’s quite a gift,” he said.

He found his emotions changing with each dance piece, from the story-based dance of the persecution of Falun Gong in China today in The Power of Compassion, to the elegance of young maidens in Courtyard Elegance, and the fast-paced leaps and twirls atop the mountains of Tibet in Snow-Capped Celebration.

“The techniques are amazing—the way that the video [digital backdrop] corresponds to the dancing. I don’t know how that technique works, but it is impressive how it works together with the orchestra.”

Mr. Lightfield said that from where they sat in the theater, he couldn’t see the Shen Yun Orchestra or hear the musicians tuning their instruments and was beginning to wonder. He said in a typical orchestral setting, the audience would hear the instruments being tuned up before the show started.

“It’s just that they are so composed and professional that you don’t even hear them, and all of a sudden, the conductor stands up and announces himself, and then they are playing.”

“I wished I could have seen a part of the orchestra,” Mr. Lightfield said.

Back in the 1980s when Mr. Lightfield first met his wife, he visited several colleges, including ones in Shanghai, Beijing, and Hong Kong over two weeks with other college presidents from the United States.

At the time, he was college president of the Prairie State College in Chicago, where he served for nine years. In recognition of his commitment to continuing adult education, the college honored him by establishing a scholarship after him and his wife: The Dr. Timothy & Deborah Lightfield Returning Student Scholarship.