‘You Can Feel the Divine’ in Shen Yun, Says Filmmaker 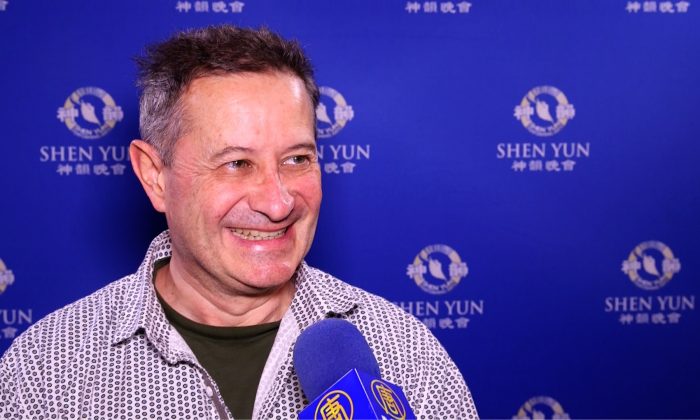 “It was fantastic, mesmerizing, enchanting. It really is a journey for the soul, for the mind, for the divine,” he said.

Itier has produced more than 20 short and full-length films, including the documentary “The Invocation” in 2012, narrated by Sharon Stone and staring Desmond Tutu, The Dalai Lama, and Deepak Chopra. He’s also a journalist for magazines and French television, and he was on the board of directors of the Santa Barbara Film Festival for 10 years.

The performance focuses on classical Chinese dance, with story-based dances, ethnic dances, a live orchestra with both Eastern and Western sounds, an interactive digital backdrop, vibrant costumes, and musical soloists to round out the program.

Itier was especially impressed with the coordination of the orchestra with the large group of dancers on the stage.

“It was was superb, really inspiring, really perfectly synchronized, amazing job,” he said.

The Shen Yun orchestra includes traditional Chinese instruments, such as the pipa, gong, erhu, and others, creating a unique sound.

“I loved the fusion of the West and the East,” he said. “It’s really what the world needs more than ever, [a] bridge between all of our civilizations for the world to come together.”

Itier also appreciated the vocal soloists, who sang in Chinese in the Western operatic  bel canto style, with the poetic lyrics projected onto the background screen. Itier found it “was very interesting and fresh and invigorating.”

He said while watching Shen Yun, he closed his eyes, and he could feel a divine energy emanating from stage, encompassing the deep artistry and spirituality of the performance.

As a filmmaker, he felt the overall structure of Shen Yun was very well done, and the experience took the audience to a place they had never been before.

“It really takes you by the hand,” he said. “It’s a journey for ages, for culture, for the world. … I think a show like this opens your mind, opens the possibilities, and it’s for you to keep going on your own journey.”

He hoped many other people would have the opportunity to come to see Shen Yun.

“You have to see it. It’s unique. It’s one incredible, unique experience. Come and see it.”