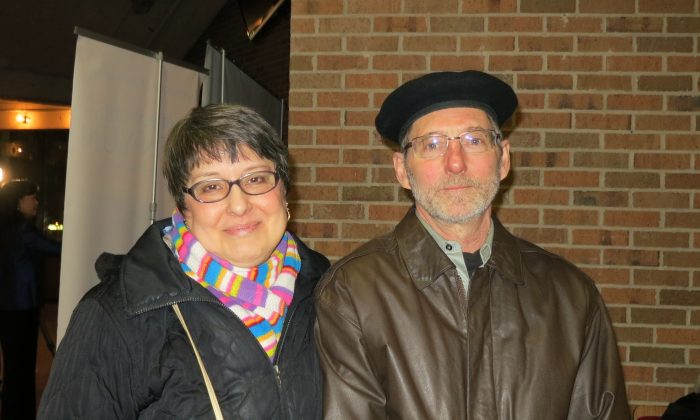 SYRACUSE, N.Y.—Michael Smith has been deeply spiritual and philosophical from a young age, growing up with parents who quoted Plato. He had philosophical insights since the age of 10.

Thus, seeing the spiritual, divinely inspired culture of China through Shen Yun Performing Arts, it immediately resonated with him.

“We’re very, very fortunate that we were able to participate and be able to see the beauty and the richness of the culture. And the spiritual aspect of it was very palpable, very meaningful,” Mr. Smith said. He attended the Jan. 29 performance with his wife Gina Odell at The Oncenter Crouse Hinds Theater.

Mr. Smith was once a classical violinist, but traded one art form for another when he found his true calling. Now the director of Morningside Yoga, he has taught and lectured on yoga at universities and aspired to elevate yoga into a form of art through a movement he started in 1997.

Mr. Smith said it was educational and telling that New York-based Shen Yun could not be seen in China, the country of origin for the arts it presents. Under communist rule, traditional Chinese values and beliefs were systematically uprooted through campaigns like the Cultural Revolution. But the China Shen Yun presents lives up to the name China once had—the Divine Land.

“It shows us that every culture has its sense of the divine and a sense of our place within the divine scheme, which is a source of hope. And just the sheer beauty of the show [was meaningful],” Mr. Smith said.

He felt Shen Yun’s stories, which span China’s 5,000 years, showed the tragedy of life, and the hope of life as well. It also showed “the connectedness to the divine,” and through that a message of hope.

Ms. Odell said it was even a bit overwhelming to learn and see all this through the music and dance, and upsetting but important to know this culture is still oppressed in China today.

She said all of it touched her heart. “All of it, all of it. Very spiritually and emotionally touching, all of it,” she said.

The tenor, for instance, had such a stage presence, Ms. Odell said. “He had such a relaxed stage presence too; he was comfortable. He really connected with the audience, he really reached out,” she said.

The couple went back and forth, sometimes finishing each other’s sentences, sometimes interrupting, on all the aspects the performance excelled in. The technology of the animated backdrop was magic, he said. The timing was perfect, she said. The costumes were beautiful. The visuals nothing like they’d ever seen.

“Beautiful. Passionate beautiful young people, just every one of those dancers was something to see,” Mr. Smith said.

“The ladies, when they did the small footsteps, it looked like they floated. When they first came in and just floated across the stage, that was just oh, together like that, the synchronicity! I was almost speechless at times!” Ms. Odell said.

Having spent years playing the violin and drums, Mr. Smith noticed the work down in the orchestra pit as well. The texture and dynamics of the Chinese instruments blended with a Western symphony he thought was wonderful; “the orchestra was exquisite.”

“It was very captivating. It was riveting from moment to moment to moment,” Mr. Smith said. “Every moment brought a new sense of delight, I thought, musically and emotionally.”