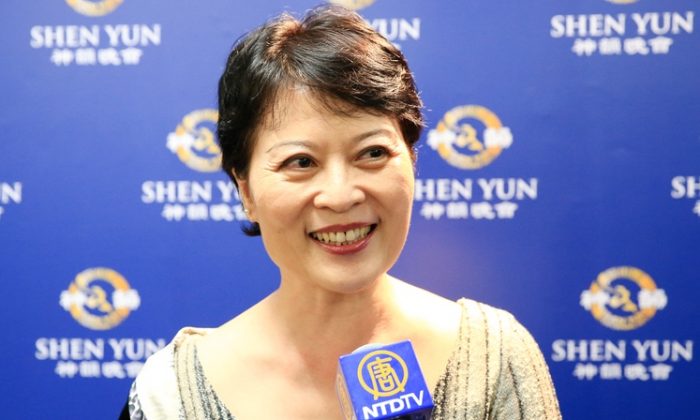 TAIPEI, Taiwan—Wang Hsueh-Min, writer and hostess in Taiwan, attended the Shen Yun performance in Taipei for the first time on the evening of April 8. She was impressed with the diversity of the cultural feast.

Shen Yun, based in New York, presents traditional Chinese music and dance with the aim of restoring the values of the ancient culture, a culture based on man’s connection to the divine.

Wife of the renowned writer Huang Ko-Chuan, Ms. Wang said, “Each of the programs is very excellent, very beautiful, bringing delight to the viewers. The presentation of power and beauty is very good, very peaceful.”

“The programs, including Capturing Arrows With Boats of Straw, are diverse, and very creative,” she said, of the story from historic Chinese novel Romance of the Three Kingdoms.

Impressed with both ancient and modern themes in the performance, she said, “Usually the performances we watch put their focus on traditional programs. Originally I thought all of them would be classical Chinese dance programs, but Shen Yun also presents modern stories, like Power of Compassion, and the ending scene is really special, awe-inspiring in my opinion!”

Impressed with the spirituality in the programs, she said, “Modern people are materially rich, but spiritually barren. Seldom considering others first, people are comparatively selfish. This is in fact due to a lack of promoting compassion.”

But she felt Shen Yun is different. She saw “returning good for evil, which is a promotion of human inner kindness.”

Citing the dance Power of Compassion again, she said, “The performer in black, one of the dark forces, broke his legs. Those holding the banner of ‘Compassion, Truthfulness, Compassion’ came to his aid. This is what humans need.”

She added, “Shen Yun is teaching us through the arts, which is of great importance. At the same time, foreigners can also understand the profundity and diversity of our Chinese culture.”

As a Christian, she saw the ‘Compassion, Truthfulness, Tolerance’ Shen Yun presented as universal values. “I can’t understand why China bans the Falun Gong group. As long as they do no harm to others, just practice their exercises and read their Fa, I think it’s very good.”

“Maybe it’s due to atheism,” she sighed.

The Chinese Communist Party has banned Shen Yun from performing in China and has banned the spiritual practice of Falun Gong as well.

Calling on People to Return to Their Original Nature

“Modern people, driven by their pursuit of secular fame and fortune, lack sincerity even when they are with their family,” Ms. Wang said. “Now people need to go back to nature, back to their original (state). It’s very important. It is vital that we go back to humans’ original nature of kindness and kind ideas.”

“Usually when watching a performance, we just see the beautiful side, but in Shen Yun there is also compassion, 5,000 years of culture, and great commitment to it,” she said.

“Teaching people to be kind-hearted, Shen Yun is not only a dance performance, but also a combination of cultural and spiritual elements, religious beliefs, guidance toward kindness. It’s a performance of truthfulness, compassion and beauty, a definitely different one!”

Ms. Wang added, “I see audience members come for the show with great passion, so I think my understanding must have been limited [previously]. Those with a better understanding of the profound meanings of Shen Yun must have felt its special and divine power.”

Mr. Zhou (an alias), a film producer in China, arrived in Taiwan for a Shen Yun show on the evening of April 6. Afterwards he said, “Shen Yun is authentic art, a performance of heart, very divine and thus very touching.”

Impressed with Shen Yun’s presentation of 5,000 years of Chinese culture, he said,”Rarely have I seen a performance of pure art in China.”

Since his work is related to the performing arts he often watches performances, but most of what he’s seen concentrates only on the performers’ skills, nothing deeper.

In contrast he felt that Shen Yun aims for something deeper: “one word can be used to summarize the efforts, … ‘heart.’ Therefore, it is very touching.”

“In fact, the reason why Shen Yun gives me such a strong feeling is that I feel purified spiritually, or feel a kind of pure beauty!” he said.

“it is very hard to make movements divine or express feelings through movements,” he said, having had some training in classical Chinese dance himself.

“Perhaps it is due to heart. Well, the saying goes: ‘One’s appearance reveals one’s heart.’ Then her movements, her gestures, must be presented differently based on what she is thinking, what her religious belief is, what her purpose is.”

“Therefore, it’s hard for me to say which of [Shen Yun’s] movements or which part touched me. Rather, the overall performance is like (mutual) communication of minds, apart from visual impacts.”

He felt that Chinese culture should be treasured and promoted, especially to Chinese youth who know little about it.

“But apart from popular music, we should also listen to ancient voices, voices of history, or real, traditional stuff, which I consider the roots of Chinese … people. They are what we should have.”

After seeing Shen Yun he wished his friends, relatives, and coworkers could see it and pitied them because the show is “only available in Taiwan, not in China.”

He longs for the time when Shen Yun will come to China. “If Shen Yun can perform in China, that will be the best for China,” he concluded.