Writer Sees a ‘Renaissance of Spirit and Humanity’ in Shen Yun 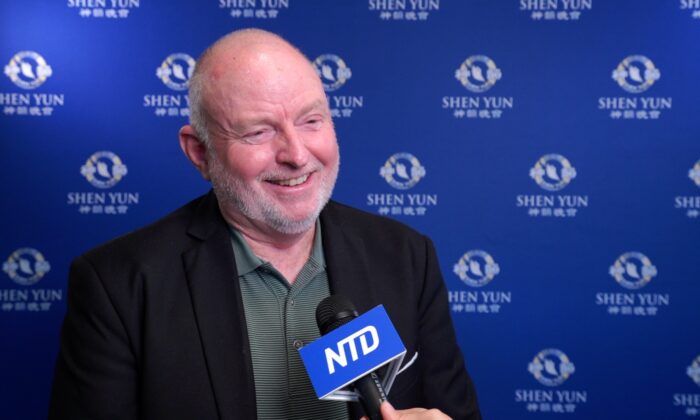 SAN JOSE, Calif.—Children’s book author and police chaplain Ray McClendon was deeply touched by Shen Yun Performing Arts and found it to be the best performance he’d ever seen.

“It was absolutely spectacular,” he said after a matinee performance. “Could not believe how wonderful it was.”

Shen Yun is a New York-based classical Chinese dance and music company that was founded in 2006 with the goal of presenting China’s authentic traditional culture onstage.

“I loved it all, from the beginning to the end, the first minute to the last minute, the first second to the last second; I just loved it,” McClendon said.

In ancient China, spirituality was an important part of people’s daily lives. McClendon, a retired teaching minister who writes spiritual children’s books, was attuned to this spiritual aspect in the Shen Yun performance he attended.

“I was deeply moved,” he said. “I had tears in my eyes for both songs and for several of the performances throughout. It was very meaningful to me.”

Each Shen Yun performance consists of a series of short dance pieces, some of which tell stories and legends, along with a few vocal and instrumental solos. The dance and musical pieces are all new every year.

Songs That Speak to the Heart

McClendon attended Shen Yun for the first time at the San Jose Center for the Performing Arts on Jan. 11. He was particularly touched by the lyrics of the two songs in the performance he saw.

“I could not believe the overlap between all of the wonderful teachings [in] the two hymns that were sung … things that were so deeply spiritual, things that I’ve believed all my life, and how much I enjoyed being reminded of those truths,” he said. “Even though China’s on the other side of the world and the culture came from the other side of the world, how much we’re the same in how our beliefs shape who we are on our better days.”

Shen Yun’s website states: “Brimming with deep reflection about life, these songs transcend the boundaries of nation, race, and culture, resonating with audiences the world over and inspiring hope in people’s hearts.”

The website explains that the Shen Yun singers use a traditional vocal technique called bel canto, and their songs are original pieces written for Shen Yun performances.

“The spiritual content of the songs and what they said is speaking to the heart and what’s common to all of humanity all around the world. It’s just tremendous,” McClendon said.

The divine aspect of Chinese culture has been nearly lost in modern China, as the Chinese communist regime has spent the last few decades campaigning to destroy traditional culture.

Shen Yun’s mission is to bring ancient culture back to life, and some of its dance pieces depict the Chinese communist regime’s brutality. As a result, Shen Yun has never been able to perform in China for fear of persecution.

“I was also troubled deep down in my soul that Shen Yun is not allowed in China anymore because of those values, and because of what they speak to,” McClendon said. “I thought that was such a shame and how much China would be enriched and bettered if [Shen Yun] were doing these performances all over China, as well as around the rest of the world.”

McClendon believes Shen Yun “would be a renaissance.”

“Not like renaissances from before, when dictators took over and put so many other Chinese people to death to bring in the communist ideals,” he said. “[Shen Yun] would be a true renaissance of spirit and humanity and compassion and love and virtue, and all those things that really make the world a better place, what we’re meant to be.”

He believes that “love is the basis of every good that we are and aspire to be and can be.”

“That’s what this show was all about, was love, so [I] really enjoyed it,” he said.

‘Transported to a Distant Land’ at Shen Yun

Through classical Chinese dance and live orchestral music, Shen Yun artists portray legends from ancient China as well as modern tales of courage. A unique digital backdrop provides scenery, and the dancers use choreography and costumes to create visual displays of color onstage.

“It’s tremendous,” McClendon said. “It was just like being transported to a distant land and getting a glimpse into what life used to be like and how different it was, but how similar it was as well.”

He believes it is “extremely important” for people to see Shen Yun, and he saw in it “sheer poetry.”

“[I] highly recommend it,” he said. “It’s beautiful, musical, lyrical, colorful; all the dancers, the precision, the artistry … the way they danced, the way the musicians played, everything from beginning to end—the best show I’ve ever seen in my life, and I’m 64.”

He thinks that what Shen Yun stands for is universal.

“I think every person in the world needs to see this. Every language, every culture,” he said.