'It's transformative. It's astonishing.' 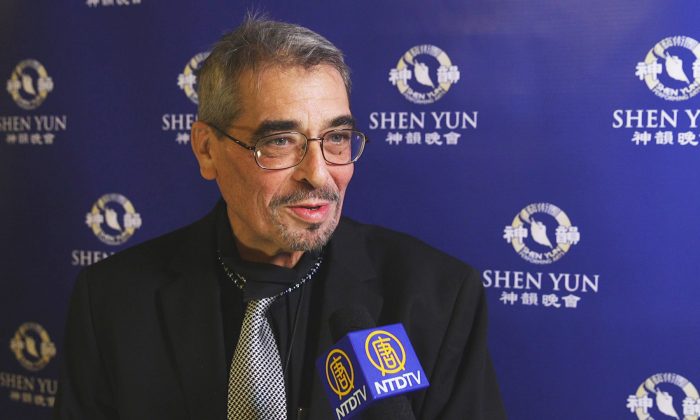 Mr. Bennett Horton Jr. said, “I learned to say I love Shen Yun,” during the performance. “It was the first Chinese words I ever spoke that I know of; and yet it wasn’t all that foreign.” Mr. Horton saw Shen Yun Performing Arts at Knoxville’s Tennessee Theatre on Jan. 13, 2016 (Courtesy of NTD Television)

KNOXVILLE, Tenn.—”Hock your soul if you must and clear one evening; you’ll get a new soul when you go see Shen Yun. Hock the one you’ve got if you must,” said freelance writer Bennett Horton Jr. “Just don’t miss it. Don’t miss it.”

Shen Yun Performing Arts just finished its two day’s stint in Knoxville, Tenn., on Jan. 13 when Mr. Horton caught the performance at the Tennessee Theatre. He’d seen a lot of dance, music, and art in his life, but never before had he “seen them all come together into one just magnificent show.”

Based in New York, Shen Yun highlights one of the most expressive dance forms in the world—classical Chinese dance—and through it reveals glimpses of Chinese culture from its beginnings to modern times. Supporting the dances are original compositions played by a unique orchestra comprised of both Eastern and Western sounds. Adding to that, colorful costumes and artistic backdrops complement the whole.

If you visit Shen Yun’s website, one of the first descriptions you’ll see is “For 5,000 years divine culture flourished in the land of China. Humanity’s treasure was nearly lost, but through breathtaking music and dance, Shen Yun is bringing back this glorious culture.”

I’ve been breathless through every number. I catch my breath while they’re talking in between the numbers!
— Bennett Horton Jr.

And Mr. Horton agreed—literally. He found that during the individual performances, he could not breathe: “I’ve been breathless through every number. I catch my breath while they’re talking in between the numbers! And then I’m breathless again. And suddenly I wish I were Chinese, and this were my culture that I was celebrating here this evening. It’s transformative. It’s astonishing.”

Each piece is introduced by two emcees. These became the intervals that allowed Mr. Horton to take a breath.

“Transformative,” he repeated, perhaps because he’s recently been undertaking a spiritual journey himself, and what he saw on stage blended perfectly with his own experiences. “It touched my spiritual soul,” he said.

In many of Shen Yun dances, humankind engages with divine beings and moral principles are highlighted—principles such as “propriety and wisdom, respect for the heavens, and divine retribution,” according to the website.

Mr. Horton was fidgeting so much in his seat that he was concerned for other viewers. “I was moving with the music and the presentations,” he said.

In fact, he felt like he was one of the people onstage: “Those people back in 350 A.D., I could have been one of them! Way over there in that culture, I was one of those people. Or, if you believe in reincarnation, maybe I really was! Because I felt as if I had been there.”

“There was a spiritual familiarity with the entire thing.”

“For a few dollars, … you may be blessed in a way that I, … words fail me in describing it,” he said.

For a writer to be at a loss for words, that says it all.