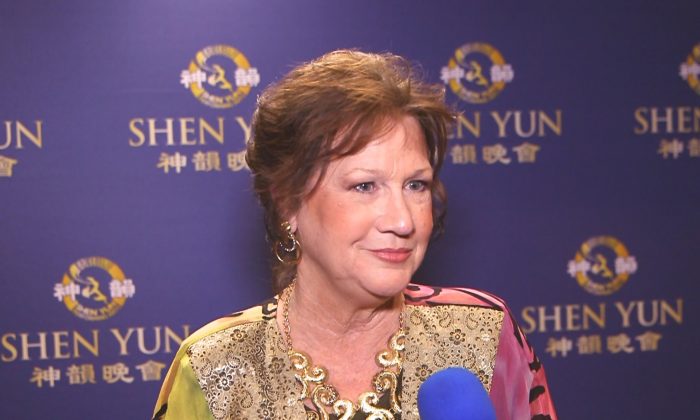 PHOENIX, Ariz.—”You have something to give to the whole world … We can all learn from each other. We all have a basis—it’s love,” said Rebecca James Courie after watching Shen Yun Performing Arts World Company’s final performance at the Orpheum Theatre on Feb. 15.

Shen Yun “really brought that out in your presentation that we are all connected,” she said.

Rebecca James Courie, who is a professional writer and former publisher, was inspired and deeply touched by the aesthetics and values of China’s ancient culture.

“The dancing was unbelievable. The singing was magnificent. These women [sopranos] are just fantastic. It’s just wonderful. The dancing was beautiful. Everything was so dramatic, and the story that you are telling about China—It has torn me up,” said Ms. Courie, with tears welling up in her eyes.

“Over its past 60 years of rule, the communist regime has treated traditional Chinese values centered on the idea of harmony between heaven and earth as a threat to its existence,” explains Shen Yun’s website.

Independent, nonprofit Shen Yun was founded in New York by a group of overseas, leading Chinese artists with a mission to revive 5,000 years of divinely inspired culture that has been all but lost under the current atheist communist regime in China.

Ms. Courie said in tears, “We live in such an easy society here in the America and we take things for granted and for you to be going through so much over there now, it really brought it home to me. So this was such a beautiful thing in so many ways. It really touched my heart.”

She continued, “My goodness. I cannot think of not being able to meditate or pray and be persecuted. We have such a wonderful freedom here, and I can’t believe that still goes on.”

A Shen Yun performance includes over 20 vignettes that transport the audience members on a journey through China’s culture and beliefs, where myths and legends come to life, and virtues such as bravery, compassion, kindness, loyalty and perseverance are personified.

Ms. Courie said she was moved by the tradition and beauty in Chinese culture and the Falun Dafa practitioner’s faith and steadfastness.

“It’s unbelievable that the people there that would still have their faith, and genuinely go through it regardless of what could happen to them. They still have their belief. And that’s what’s so tremendous for me because they stay strong. They are steadfast. It’s a wonderful culture. It’s beautiful. I’m tremendously touched by that. Beautiful people,” she said.

Finally, Ms. Courie thanked Shen Yun, “It was just a beautiful experience. Thank you so much. I’ll definitely come back next year.”

Ms. Courie also thanked her sister for giving her the Shen Yun ticket as a birthday present.

Taking his wife and a visiting friend from Peru to see Shen Yun, Nick Crowder was impressed by the performance.

“The show was phenomenal. We were just enthralled. It was a wonderful show. I recommend it to anybody,” he said, “It was just a beautiful show, and I would be back.”

Mr. Crowder is an author who has written several books about South America. He is also the owner at Crowder Publications.

Mr. Crowder had high praise to the Shen Yun Orchestra, “I really love the orchestra. I thought the orchestra was just phenomenal.”

“Usually when you go to a lot of shows in the United States, they don’t travel with a full orchestra,” explained Mr. Crowder, “It gave you a good roundness of both cultures and both instruments. It was just phenomenal.”

According the website, “The Shen Yun Orchestra combines the spirit, beauty, and distinctiveness of Chinese music with the precision, power, and grandeur of the Western symphony orchestra. The result—two great traditions producing one refreshing sound.”

Mr. Crowder thanked Shen Yun, “I had a wonderful time. And my wife did too.”