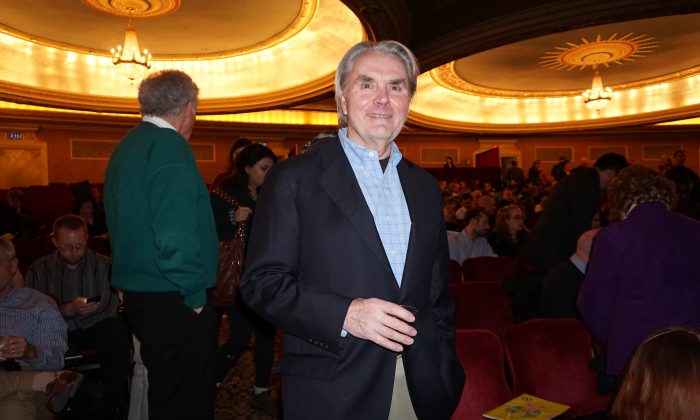 Writer Richard Lepart liked the humanity he saw in Shen Yun at the Orpheum Theater, on feb. 20, 2016. (Sally Sun/Epoch Times)

MINNEAPOLIS—For Richard Lepart, the Shen Yun Performing Arts at the Orpheum Theater was provocative on a philosophical level, as he put it.

According to the Shen Yun website, the New York-based company takes the audience on a 5000-year journey through Chinese history. Mr. Lepart was not prepared for the scope of that journey, but regarded the show with peaceful awe, comparing it to meditation.

“The concepts that they’re dealing with are thousands of years old and I think sometimes, in this country we think of things that are old that are 200 years (or) 500 years,” said Mr. Lepart.

He found the mood and tone of the performance lovely.

“I like the humanity of it,” Mr. Lepart continued. “It’s so compassionate and very sweet. I enjoy it.” Mr. Lepart particularly enjoyed how the groups of dancers seemed to move as one.

A writer by trade, Mr. Lepart said Shen Yun, “is so lovely. It’s just entertaining, and it’s so calming. It so draws me in. Calming, very serene, it’s wonderful. It’s like meditation.”

Lepart began meditating when he was 20 years old. Now, at age 70, he has been mediating for 50 years. Meditation comes in many forms for both the secular and the religious, according to WebMD. The health benefits to mediation are numerous including lower blood pressure, stress reduction, and boosts to the immune system. Mr. Lepart has long been accustomed to benefiting from meditation and describes it as something he couldn’t get through his life without.

As Shen Yun revitalizes the traditions of Chinese culture that have been lost under the Communist Party’s 60-year rule, the spiritual traditions throughout the ages in China come through in several different pieces of the show.