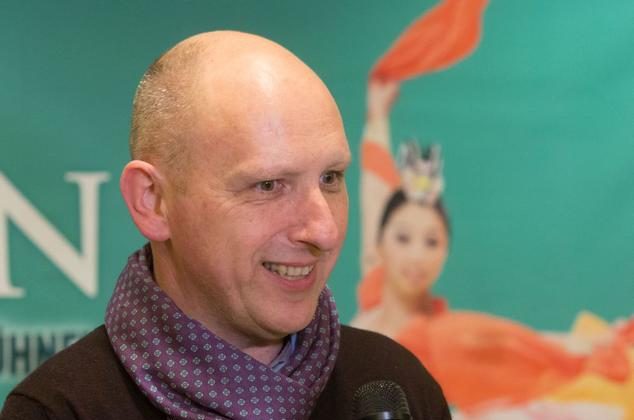 Mr. Fabian Lange, journalist and author, was impressed with the Shen Yun at Frankfurt's Jahrhunderthalle on March 15, 2015. (Mathias Kehrein/Epoch Times)

FRANKFURT—Shen Yun performed on March 15, 2015, and Mr. Fabian Lange, who writes for the Times, Frankfurter General Newspaper, and Star, said it enchanted the audience.

He said, “Shen Yun was a fantastic and very colorful production. I felt a lot of empathy and warmth and intensity of emotion.” He saw the Shen Yun artists at Jahrhunderthalle.

“Shen Yun provides inspiring pictures that enchant the audience, and many different perspectives. Besides, there are many surprises, with one being humor, and a very sophisticated dance performance.”

Shen Yun said on its website: “The Shen Yun Orchestra masterfully blends two of the world’s greatest classical music traditions … The Western orchestra with its energy and grandeur, and the Chinese instruments with their distinct tones and styles, create a dramatic new sound.”

Mr. Lange was delighted to be exposed to another one of China’s faces, “China is known to have many faces and it was excellent to get to know another face of that country, the ancient culture. Most importantly it was presented by people that represent that culture.”

The performance left him wanting to learn more about Chinese culture. “What I take home today is a different perspective of China … I will ask questions in my mind and find the answers to them,” he said.

According to Shen Yun, “Through the universal language of music and dance, Shen Yun weaves a wondrous tapestry of heavenly realms, ancient legends, and modern heroic tales, taking you on a journey through 5,000 years of Chinese culture.”

Ms. Oona Borkowsky and Ms. Eva Borkowsky-Block couldn’t attend the 2014 Shen Yun for a number of reasons, but were delighted to make it for the 2015 performance.

Ms. Borkowsky-Block said, “Last year we saw the posters and couldn’t make it. Therefore we both are exuberant that we didn’t miss the 2015 performance.”

She said she felt happy that they had at last experienced Shen Yun.

Before the show, there were so many problems, “I was afraid I wouldn’t make it to the show. But, I made it on time.”

Once she arrived, the beauty and joy in the performance acted as a tonic. “Then, I saw in the show the positive, the hope, and goodness, displayed by the performers. I know now that it exists, because I experienced it myself this time. I was in a hopeless situation and yet I overcame it. Now, I feel completely different.”

According to Shen Yun, the artists hope that the “stunning beauty and tremendous energy leaves audiences uplifted and inspired.”

Ms. Borkowsky-Block said Shen Yun had that effect on her. “There was so much beauty and harmony—indescribable. Also to see the perfect synchronization of the dancers was unexpected, unbelievable and impressive.”