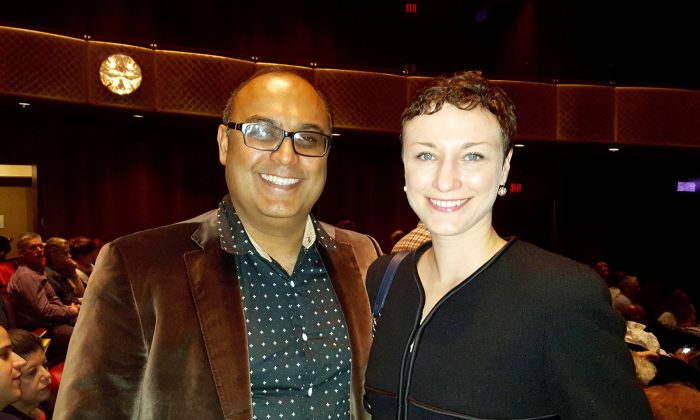 NEW YORK—Kristin Vukovic’s work as a writer has taken her to incredible corners of the world all over, so she has seen first hand how culture informs identity.

“There’s always a part of the past that’s in the present,” Ms. Vukovic said. On Saturday night, she witnessed 5,000 years of Chinese civilization, and what the culmination of that meant, through Shen Yun Performing Arts.

“There [are] so many layers of history, and to see what’s been preserved over time, and to really remember what those things have meant to people, and stories that we tell each other over centuries, is really just an important part of identity, who people are.”

She attended the performance with Jaidev Shergill, head of Capital One Growth Ventures, who was amazed by the depth and breadth of China, and how Shen Yun captured it.

“You go back into time with the different dynasties, and you start to see all these differences, it was really fascinating,” he said.

The 20-part program included a celebratory Tibetan khata dance with long, white sleeves and rainbow-patterned skirts; a story about the mythical Monkey King; a scene from the Tang Dynasty; and a dance interpreting one of China’s most famous poems.

And all of it was done with precision down to the millisecond. There were certain parts, like the coordination between dancers on stage and animations on the digital animation backdrop, that could have gone so wrong if the timing wasn’t absolutely perfectly executed. “It’s magical. … They’ve done it really well.”

In a way, Shen Yun represented freedom for Mr. Shergill. What the company is doing is reviving the authentic traditional Chinese culture—which actually cannot be found in China today. It brings to mind an appreciation, he said.

“I think it’s a brave mission, because in today’s day and age it’s just so easy to look forward and not back. One actually forgets the fundamentals of what you’re building on today is based on the past as well,” he said.

Ms. Vukovic agreed. There was meaning in the old culture. In Shen Yun she saw “these different generations searching for their own truth.”

“I think that there’s always a part of the past where people are searching for things. … I think there [are] elements of ourselves that we’re always looking for in each lifetime,” she said.