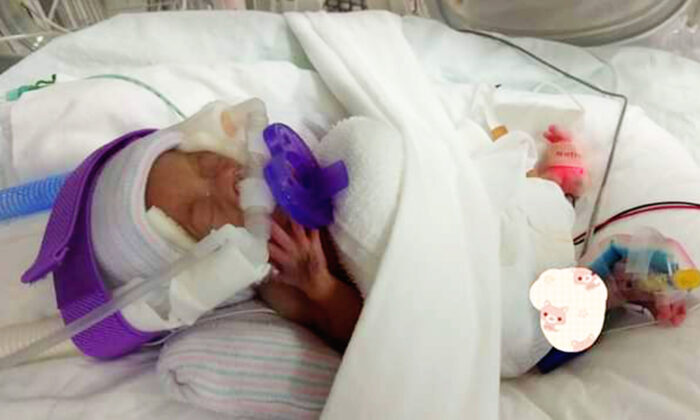 ‘World’s Lightest’ Baby, Born the Weight of an Apple, Goes Home After 13 Months in Hospital﻿

A baby girl born in Singapore weighing the same as an apple is believed to be the world’s lightest baby to survive a premature birth and be discharged healthy. She finally headed home with her grateful parents after 13 months of fighting for her life in the hospital.

Kwek Yu Xuan was born at 24 weeks and 6 days gestation on June 9, 2020, at Singapore’s National University Hospital (NUH). At birth, she weighed just 212 grams (0.46 pounds), making her lighter than the smallest survivor on the Tiniest Babies Registry managed by the University of Iowa.

“In my 22 years of being a nurse, I haven’t seen such a small newborn baby,” nurse clinician Zhang Suhe, who was a part of Yu Xuan’s care team, told The Straits Times.

According to NUH, babies born four months premature have a survival rate of roughly 70 percent, and most would be discharged after four to six months in hospital. However, Yu Xuan was not only the lightest but the longest-staying baby at the hospital’s NICU, spending over a year under the watchful eyes of her care team.

In a press release, NUH praised their inspiring “COVID-19 baby” for her perseverance, calling her survival “a ray of hope amid turmoil.”

The baby’s mother and father, insurance administrative assistant Wong Mei Ling and technician Kwek Wee Liang, both 35, have permanent residency in Singapore. Wong went into labor before she and her husband could return home to Malaysia for their daughter’s birth, where the couple has a 4-year-old son living with his grandparents.

“I didn’t expect to give birth so quickly and we were very sad that Yu Xuan was born so small,” she said. “But due to my condition, we didn’t have a choice. We could just hope that she would continue to grow and be healthy.”

Too small for her lungs to function independently, Yu Xuan was placed on a ventilator. Using probes to monitor her vitals was a delicate procedure, as leaving them on her thin, fragile skin for too long would invite an open wound, making her prone to infection.

Unable to import micro-preemie diapers at a reasonable cost, Yu Xuan’s nurses fashioned tiny diapers out of larger ones by cutting them to size and cutting off the urine-absorbing chemical strips that may have harmed the baby’s skin.

The first two weeks of Yu Xuan’s daily care, said neonatal senior consultant Dr. Yvonne Ng, was pivotal. “We needed to innovate and find some improvised methods to deal with a baby this small because this is the first time we experienced somebody this tiny,” she explained. “She was so small that even the calculation for the medication had to be down to the decimal points.”

Yet despite the baby girl’s ordeal, Yu Xuan’s care team claimed she was an “active, cheerful” infant who liked her pacifier and being talked to, and responded to the sound of her own name, according to the press release.

As the months rolled by, Yu Xuan’s condition improved. Her mother was offered free temporary residence at NUH’s Ronald McDonald House on-site, where she was able to work remotely during her daughter’s hospitalization.

“I have to thank the nurses for taking care of her for such a long time,” said Wong. “We were very happy that everyone could come for her discharge; the team is like family.”

Bonded to the baby girl and her survival story, off-duty NUH nurses even showed up to take photos as she went home with her joyful parents.

“This was a team effort that embodies the spirit of care and compassion,” said Associate Professor Zubair Amin, senior consultant of NUH’s department of neonatology.

Now at 15 months of age, Yu Xuan remains in Singapore with her parents for follow-up care at the hospital. She’s learning to bottle feed, and can now turn over on her own.

She still has chronic lung disease and pulmonary hypertension, two conditions that are associated with prematurity. Additionally, Yu Xuan uses an oxygen ventilator loaned from NUH at home.

Her hospital bills, which totaled approximately $200,000 (approx. US$1,47,888), were settled by a generous Give Asia fundraising campaign. After Yu Xuan’s parents reached their goal, they pledged to donate the remaining funds back to Give Asia for other families in need.

Doctors expect the baby girl to continue to improve with time.