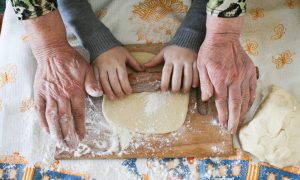 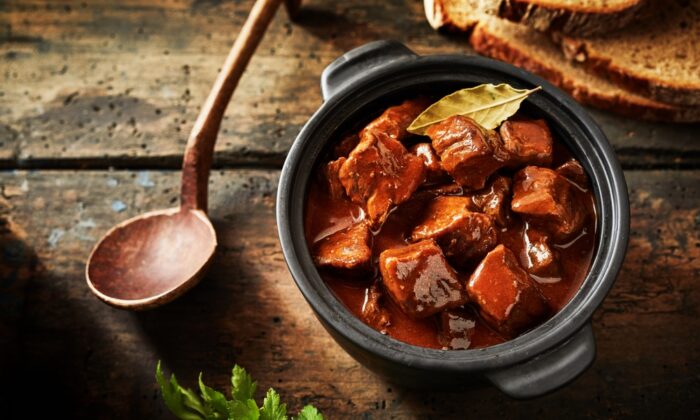 Hungarian goulash may have as many variations as there are home cooks, but generally involves chunks of beef simmered until tender, with a generous helping of sweet paprika. (stockcreations/Shutterstock)
Recipes

Will the Real Goulash Please Stand Up?

Hungarian and American goulash, as different as they are, both deliver slow-cooked comfort
By Kevin Revolinski
biggersmaller
Print

If you are a Midwesterner, you may have grown up having something called “goulash.” For me it looked suspiciously like chili, maybe a bit soupier and a bit blander, and it definitely involved some form of pasta, likely elbow macaroni.

Outside the Midwest, the same dish, or something very similar, appears, but with different names. Along the East Coast, American chop suey appears to be a similar casserole, if not the same, as is “glop.”

Several years ago, my travels took me to Budapest, Hungary, where goulash is the national dish. I sat down in a café with a short menu that appeared dedicated to it, but when my order arrived, I thought, “What the heck is this?” It amounted to a plate of tender chunks of beef swimming in a paprika-heavy gravy with bits of potatoes and carrots. Delicious, but a far cry from what my mother was peddling.

Down among the lower branches in my family tree are a couple names that look suspiciously Hungarian, but along with the Czech and Slovak forebears, are merely fellow defectors from the Austro-Hungarian Empire. Mom’s “goulash” didn’t come over with them. So I dug a little bit.

Says my mother: “It’s so easy! Take your hamburger and fry it all out. Ground sirloin. You can use anything, but you need to get the grease out if you use chuck. Pat it with a paper towel.” Then she adds stewed tomatoes, tomato juice, and tomato sauce, plus kidney beans (two cans!), diced celery, onion, and parsley.

“I cheat and use the Lipton onion soup mix. It has to be runny enough to accommodate the (elbow) macaroni you add at the end. A little bit of chili powder maybe. But why bother? I don’t have a lot of spice.”

Like many home cooks of her generation, with years of experience feeding finicky kids with anything that works, she doesn’t use a recipe. But when I pushed her, she went to the great culinary equalizer, a standard-issue wedding gift to young American couples (wives, really) of the mid-20th century: the Betty Crocker cookbook. My mother still has her vintage copy. After college, I had the three-ring binder edition.

This recipe we call goulash appeared to be “chili con carne,” by Betty’s reckoning. Likewise an easy recipe, nearly identical to my mother’s, it consisted of ground beef, a sliced onion, chopped green pepper, stewed tomatoes, and a can of kidney beans. Spices comprised a mere one or two tablespoons of chili powder, a surely unnoticeable eighth teaspoon of cayenne pepper, and an equally minute measure of paprika—surely an insult to any paprika-red-blooded Hungarian. (To be fair, the modern Betty recipe for chili con carne bears much closer resemblance to the average chili recipe!)

That sounded about right for Wisconsin goulash, however. Simmer that up and pour it over a bowl of macaroni. Some restaurants even add a spoonful of sour cream on top.

Not to paint with too wide a brush, but small-town Midwest Euro-immigrant cuisine tends toward the, uh, cautious? While some of us have grown to love diverse and spicy foods, many rural kitchens—gratefully excepting ethnic variations—are generally limited to salt, pepper, and Lawry’s (seasoned salt). Most of those little jars in the spice racks we got at our weddings years before remained unopened. I’ve asked my mother for pepper at dinner, and she tells me to search in the cupboard because “I don’t eat spicy.”

I reminded her of this, and she perked up with her Betty Crocker. “Wait! There’s a spicy version.” It added three cloves and half a stick of cinnamon. I assured her in chili-snob fashion that this is not chili. Nor is it the original goulash.

Gulyás, pronounced GOO-yash, is the Magyar (Hungarian) word for herdsman, and this was their hearty soup-stew as far back as the 9th century, long before the Old World explorers and traders brought back New World peppers—and thus, before the introduction of dried, pulverized paprika. Working out in the fields as they did, the herdsmen brought along seasoned dried meats for easy meal preparation. Just add water and onions in a pot over the fire. Tomatoes and potatoes, also not native to Europe, didn’t make their way into the Hungarian version for centuries.

But like all things, the dish evolved. Modern Hungarian goulash may have as much variation as American goulash, but generally speaking it calls for chunks of beef—not ground beef—simmered at a low temperature to make it tender, thus allowing for the use of cheaper cuts of meat. It also calls for paprika far beyond fractional teaspoon measures. A quarter cup might be a good start, and honestly, doesn’t strike me as unusual: my chili recipe calls for more than a quarter cup of chili powder.

So how did the American goulash acquire the name? History is unsure. In Europe, the word “goulash” spread and became, as it is today, a broader term for stew or soup with chunks of seasoned meat. Recipes for goulash started appearing in American cookbooks early in the 20th century. The substitute of ground beef would have been a cost-saving option, and chili powder—a blend of several peppers—is not too big a stretch in variation. The similarity must have been enough for those immigrants who knew the word to apply it.

In a Dutch oven, do a quick searing/browning of the meat chunks over medium-high heat, then set the meat aside.

Melt lard (or butter) in the Dutch oven and sauté the onion until translucent. Then add the garlic and caraway seeds for about a minute. Use enough of the beef broth to deglaze the pan a bit, then toss in the meat and add the paprika, stirring well to distribute it evenly. Pour in the rest of the broth, diced tomatoes, bay leaf, and salt and pepper. Stir and bring to a boil, cover, then reduce to a simmer for 40 minutes to an hour or more, until the meat is tender.

Add the carrots, red peppers, and potatoes, cover, and simmer for 30 minutes more. This will lean toward a soupy consistency. If you want something a bit thicker, make a roux and add it when you simmer the carrots and potatoes.

Serve in bowls with sour cream and good bread for dipping.

Note: Basically any cut of beef works, but the cheaper the cut, the longer the slow-cooking time needed to soften it up.