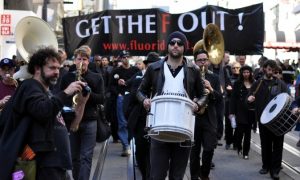 Why Water Fluoridation Continues, Despite Flying in the Face of Science

A majority of Americans consume an “invisible” drug on a daily basis—a drug so harmful it’s been proven to cause serious health issues, including damage to your bones, teeth, kidneys, thyroid, and pineal gland.

Dozens of studies have shown it reduces IQ in children and damages your brain. Despite that, this drug is so pervasive that over 40 percent of American teens between the ages of 12 and 15 show visible signs of overexposure.

The drug in question is fluoride—which is added to a majority of municipal water supplies across the US. It’s also found in a number of other products, most notably toothpaste and other dental treatments.

Sodium fluoride—which is a far simpler toxin than the fluoride compounds used for most water fluoridation—has been used for rat and cockroach poisons, so there is no question that fluoride is toxic.

Many fail to realize that fluoride is indeed a drug, and as such it is grossly inappropriate for it to be indiscriminately added to water supplies, as there’s no way to control the dose. Contrary to popular but misguided belief, fluoride is NOT an essential nutrient, and there is simply no such thing as “fluoride deficiency.”

Dozens of studies have shown that fluoride reduces IQ in children.

In fact, if you decided you wanted to take fluoride, you’d have to get a prescription for it, and that prescription would specify the recommended dosage. Yet fluoride is added to municipal water supplies reaching nearly 211 million Americans, including infants and the elderly.

As of 2012, more than 67 percent of Americans receive fluoridated water, up from 66 percent in 2010. Of those, more than 11 million people receive fluoride at or above what has been deemed the “optimal” level, according to the US Centers for Disease Control and Prevention (CDC).

With few exceptions, most other countries do not fluoridate their drinking water. Any sensible person would probably end up asking the same question. It’s illegal and unethical for a medical doctor to give you a drug without specifying dosage and failing to monitor your health for side effects.

How can water authorities be permitted to add a drug—and one with known toxic potential at that—to your drinking water? Your local water authority has absolutely no way of knowing who in your household is drinking it, how much, and how it’s affecting you. On top of that, they never received medical consent from anyone…

Many are also wholly unfamiliar with the history of water fluoridation. Far from being a scientifically proven health booster, it actually began as a solution to fluoride pollution generated by the Atomic Bomb Program and the aluminum industry in the mid-1940s.

The disposal of chemical waste by diluting it into water supplies across the country was cleverly “sold” to dentists and the general masses as a preventive strategy for reducing tooth decay.

This mass poisoning strategy, originally devised to overcome the costly and difficult logistics of toxic waste disposal, has been heralded as one of the top 10 greatest public health achievements of the 20th century.

Fluoride can lead to other serious health issues, including damage to your kidneys, thyroid, and pineal gland

They also believed this approach would ward off the threat of lawsuits from both farmers, whose crops and cattle were damaged by fluoride pollution and workers exposed to fluoride in the work place. In a sane world, public health policy would be based on sound and conclusive science. Unfortunately, that is not the case when it comes to water fluoridation.

In fact, despite overwhelming evidence demonstrating that swallowing fluoride is not an effective preventive strategy against tooth decay and may be causing significant health problems in many individuals, the practice of adding fluoride to municipal water supplies continues unabated.

Why does this practice continue when it flies in the face of all the current research? The answer to this question is just one of the countless shocking revelations featured in Professional Perspectives on Water Fluoridation.

The film, which features a Nobel Laureate in Medicine, scientists, dentists, medical doctors, and leading researchers in the field, reveals the science behind water fluoridation, the effects it has on your health, and why there is no logical or rational reason to continue fluoridating our water.

Would You Drink Shampoo to Clean Your Hair?

The only science that mildly supports the use of pharmaceutical-grade fluoride as a preventive against dental caries is topical use of fluoride (although even that is debatable, based on more recent findings).

There is really no scientific basis at all for ingesting fluoride to protect your teeth! In fact, when fluoride is taken internally, it actually damages your teeth, causing a condition known as dental fluorosis.

Outwardly visual signs of this condition include pitting and discoloration of your teeth. Today, 41 percent of American children between the ages of 12 and 14 have dental fluorosis. The consumption of fluoride has also been linked to:

This is what the science is telling us about the ramifications of fluoride ingestion. And, yet, rather than taking the precautionary approach and stopping fluoridation, policymakers continue to blindly forge ahead; refusing to give the scientific evidence the attention it deserves.

Tap This: Why You Simply MUST Filter Your Water

The CDC and ADA Warn Against Fluoridated Water for Infants

In November 2006, the American Dental Association (ADA) sent out an email to its members, recommending parents to use no- or low-fluoride water to make infant formula. This was a very reasonable recommendation, because an average glass of fluoridated water contains 250 times more fluoride than breast milk. A few days later, the CDC followed suit, but neither of them openly warned the public.

In 2011, a panel convened by the ADA’s Council on Scientific Affairs issued an updated report and clinical recommendations on children’s fluoride intake from infant formula, which states that parents can continue using fluoridated water when reconstituting infant formula “while being cognizant of the potential risk for enamel fluorosis.” “When the potential risk for enamel fluorosis is a concern,” parents are advised to use fluoride-free water.

This still is not well-known however, so far from “being cognizant” of the risks, millions of parents are still using tap water to make up formula, completely oblivious to the potential ramifications. By fluoridating the municipal water supply, you doom many low income families to fail to protect their young children from this dangerous drug, even if they have this information, which most people do not.

*Image of “tap” via Shutterstock