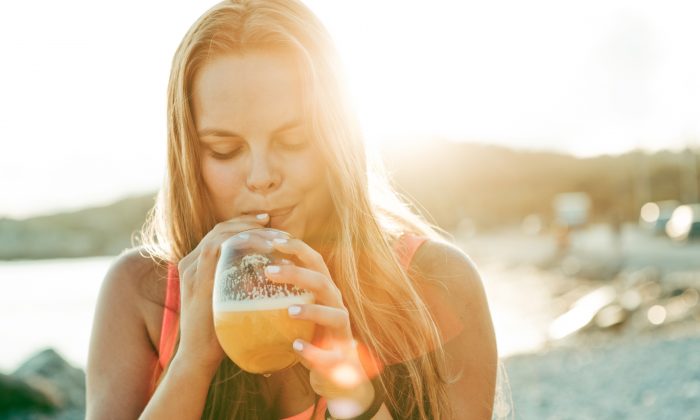 It's still a good idea to sip water in between the beer, wine, or fancy cocktails with a tiny umbrella, but it takes more to catch up than you may realize. (A75/iStock)
Good to Know

It’s time for fun in the summer sun. But before your next festival, barbeque, or summer soiree, consider what health experts say about mixing alcohol with high temperatures.

According to Dr. Josef Thundiyil, emergency physician with Orlando Regional Medical Center, alcohol acts as a diuretic. In hot weather, this diuretic action drains the body of precious fluid at a time we need it most.

“People think of alcohol as a thirst-quencher because it comes in a refreshing, cold liquid. But in hot weather, you’re already losing fluids through sweat and through exercise,” he said.

It seems strange that drinking can dry you out, but it’s true. Alcohol leads to increased urination, but it’s not only due to an increase in liquid consumption. Thundiyill says that booze inhibits a hormone that regulates fluid balance.

What Chinese Medicine Says About Alcohol

It’s still a good idea to sip water in between the beer, wine, or fancy cocktails with a tiny umbrella, but it takes more to catch up than you may realize. It’s estimated that alcohol makes you lose a third more liquid than you actually drink.

Maintaining good hydration is especially important in hot weather because your body uses fluid—sweat—to cool itself. If this thermoregulation process breaks down due to a lack of fluids or prolonged heat exposure, it can lead to heat-related illnesses. This usually starts off as muscle cramping as we deplete electrolytes, but it can eventually turn into symptoms such as extreme fatigue, mental disorientation, and passing out.

Even non-drinkers are susceptible to heat illness, especially children, the elderly, and athletes training hard in the summer sun. Thundiyill sees otherwise fit patients pass out from excess heat and be completely confused for hours at a time.

Alcohol depresses your hypothalmus, a gland that regulates body temperature.

Add alcohol into the mix, and heat illness can come on even faster than normal. Alcohol depresses your hypothalmus, a gland that regulates body temperature. This means that if you drink alcohol in a hot environment, you’ll likely get hotter. And you don’t have to drink much to run into problems.

“Impaired judgement is a big issue because a lot of times people don’t know exactly how unclear their decisions actually are,” Thundiyill said. “Even if people may not achieve the legal driving limit, .08 in most states, you can still have ill effects. You can lose judgement and coordination, and that can give way to things like more significant inebriation.”

Related Coverage
How to Exercise Safely in the Heat

Blisters and red skin from lying in the sun too long, a severe barbeque burn, and a fireworks accident that led to scorched and damaged hands are some of the related cases Thundiyill has seen recently. “I’ve seen people pass out onto very hot concrete. Hot concrete can get up to 120 plus degrees,” he said. “They can’t get up, and they actually get burned from being on very hot ground.”

Dehydration is at the root of heat and alcohol induced injury. Ironically, water is often where a lot of mishaps occur. According to the Centers for Disease Control, about 10 people a day die from drowning. About half of all drowning and boating-related deaths stem from alcohol.

“We see people who go water skiing and do tricks that they may not ordinarily try and get injured. Some people try to repair a boat motor that gets stuck, and they get caught in the propeller because someone on the boat turns it on. These scenarios are made much more possible with the use of alcohol,” he said.

Alcohol is not a thirst-quencher. If you’re thirsty, drink water.

Since inebriation, dehydration, and poor decision-making increase with heat, Thundilyill recommends that every outdoor summer party have at least one person who stays sober.

“They always mention having a designated driver. But I think it’s also important in the summertime if you’re going to be out at festivals or at a barbeque or outdoor activities all day to have somebody in the group plan not to drink, so they can keep an eye on other people,” he said. “This is particularly important in water recreation.”

Don’t stay out in the sun too long. Take breaks inside to cool off.

Pace yourself, especially with hard liquor. Cans or bottles of beer come in a fixed amount, so they’re easier to track. However, liquor consumption depends on the heaviness of the hand that pours it. If the cocktail is sweet and cold, you might not realize how much you’re putting away.

Don’t stay out in the sun too long. Take breaks inside to cool off. You may be convinced after three Long Island iced teas that a nap in a hammock is a good idea. But you may wake up sunburned.

Pay particular attention to the very young and very old. “People over 65, because [of] their underlying medical illness, because of medication, or because of their age, aren’t able to recognize when they get dehydrated,” Thundiyill said.