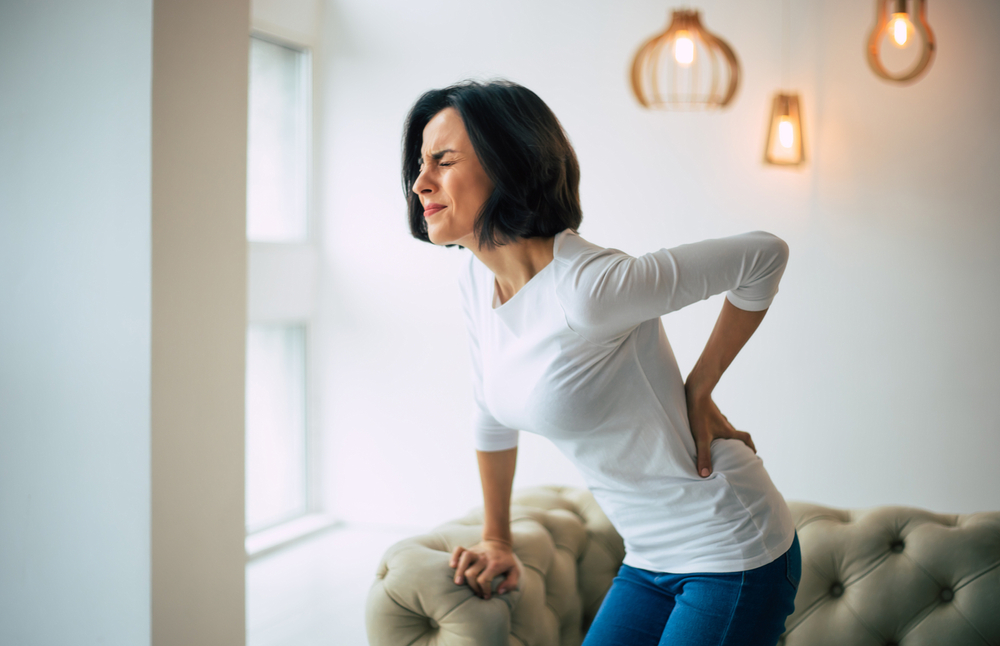 Dealing with pain on a daily basis can take a toll on our mental and physical health. (Shutterstock)
Chronic & Acute Pain

Our fear and anxiety drive biochemical processes that leave us with real physiological suffering
BY Conan Milner TIMEMarch 19, 2022 PRINT

We usually think of it as a bad thing, but pain helps keep us from harm. In fact, without pain, our lives would be cut short.

In the book “Pain: The Gift that Nobody Wants,” authors Philip Yancey and Dr. Paul Brand write about a congenital disease that causes people to be born unable to experience pain. Lacking this sensory guidance, these people easily fall prey to serious injuries, fail to seek medical attention in a timely manner, and often die before they reach adulthood.

Like the negative aspects of our other senses—experiencing stinky smells, a foul taste, a grating noise, or a dreadful sight—pain serves as a message that something is wrong and change is necessary. If you stub your toe or bump your head, the message is to pay attention and become more conscious of your surroundings.

However, if we suffer and the message isn’t clear, pain seems cruel, unnecessary, and unfair.

Our culture generally isn’t interested in uncovering the message of pain. An old jingle for an over-the-counter pain killer sums up the feeling: “I haven’t got time for the pain.” But efforts to silence, pain without deciphering its message can lead to unintended consequences.

For example, starting in the 1990s, prescription opioids became increasingly popular among doctors tasked with treating chronic pain, but the result was an addiction epidemic. When the medical establishment realized their error and began to deny patients pain pills, many turned to heroin, fueling an unprecedented appetite for a dangerous drug. Since 1999, the number of opioid deaths (from both prescription and illegal drugs) has quadrupled. According to the Centers for Disease Control, each day 91 Americans die from an opioid overdose.

There are safer methods promising an escape from pain, but they may fail to bring immediate relief. And after weeks, months, or even years of constant agony, pain sufferers are willing to try anything that offers some sliver of hope.

This is a drama Steven Ozanich knows well. At the age of 14, his back locked up, and for the next 30 years, he tried everything to stop the pain.

“I was desperate. I tried acupuncture, thousands of chiropractic manipulations, physical therapy, and hanging upside down like a bat trying to stretch it out,” he said.

Finally, Ozanich resigned himself to surgery: spinal fusions and titanium plates. A couple of weeks before the procedure was scheduled, however, he found Dr. John E. Sarno, a professor of rehabilitation medicine at New York University School of Medicine.

Thanks to Sarno, Ozanich canceled his surgery, and 17 years later he’s still pain-free.

In 2012, Forbes magazine called Sarno “America’s Best Doctor” thanks to his “miracle cures.” He has received glowing celebrity endorsements—ranging from shock jock Howard Stern to former Iowa Sen. Tom Harkin. Millions are said to have benefited from his work, yet you’ve probably never heard of him. Perhaps it’s because his strategy for addressing pain seems so at odds with how we typically understand the pain mechanism.

From Sarno’s perspective, pain isn’t rooted in the physical, but rather the mental and emotional. He calls the process tension myoneural syndrome or TMS. The idea is that our dark, unexpressed feelings cause chronic tension, resulting in physical pain.

Sarno hit on the idea in the 1970s while examining a woman he called Helen, who was bedridden due to severe pain. Under psychoanalysis, Helen recalled being molested by her father. Uncovering these memories culminated in an emotional meltdown, and a feeling that she was going to die. But after sobbing for several minutes, she felt the pain she’d been carrying for years suddenly disappear.

Observations like these convinced Sarno to see chronic pain as a kind of protective mechanism—a distraction from feelings you’re not ready to face.

For those willing to confront the emotional demons that lurk behind their pain, the process is a revelation. In a recent documentary about Sarno called “All the Rage,” Larry David (of “Seinfeld” and “Curb Your Enthusiasm” fame) confessed to weeping after his appointment. “All of a sudden, the pain was gone. It was the closest thing I’ve ever had in my life to a religious experience,” David said.

At age 93, Sarno is now retired, but others have taken up his torch. One is Ozanich, who has written three well-received books about his experience helping people resolve their TMS. Many heal just from reading the books alone, he says.

Ozanich isn’t a doctor, but he doesn’t have to be. Sarno’s treatment doesn’t require a medical degree because it comes down to the simple process of a patient accepting an idea or new way of viewing the pain.

“The source of the pain is unwanted emotions,” Ozanich said.

Whether it’s foot pain, carpal tunnel, or an aching back, Ozanich poses the same question: “What’s going on in your life?”

While modern medicine is focused almost exclusively on the physical, ancient doctors understood that emotions play a major role in health and healing. In traditional Chinese medicine, for example, negative emotions are believed to injure the organs. Fear hurts the kidneys, anger the liver, and grief the lungs.

In contemporary culture, however, chronic pain sufferers are often deeply offended when anyone suggests that the source of their discomfort is emotional. But Ozanich knows how they feel.

“When I first started to read Dr. Sarno’s book, I threw it against the wall. It made me that angry,” he said. “Now I know, looking back, that it was because it was true that it made me angry.”

This can be especially frustrating to patients who already hold evidence of a physical problem—like a doctor’s diagnosis that points to a clear cause. But Ozanich isn’t fazed.

“You always want to go get checked out first,” he said. “We want to make sure there isn’t some malignant process happening that is threatening your life.”

It may sound strange to suggest that physical evidence found right at the site of pain isn’t entirely the cause of a patient’s discomfort, but according to Dr. David Hanscom, a renowned spine surgeon at the Swedish Medical Center in Seattle, it’s true.

“It’s just not logical that any given bone spur is really going to cause that much pain,” Hanscom said. “Those bone spurs have probably been there for years, but all of a sudden the pain lights up. Why?”

Hanscom didn’t study with Sarno, but through his own clinical experience and observing evidence in the medical literature, he has arrived at similar conclusions. In his new book, “Back In Control: A Surgeon’s Roadmap Out of Chronic Pain,” Hanscom argues that chronic anxiety and anger are the root cause of nearly all chronic pain cases.

Hanscom explains it as an issue of body chemistry. With prolonged anger or anxiety, your body excretes adrenaline, which has been shown to make nerves more sensitive. So your bone spur, tendonitis, herniated disk, or another physical anomaly that previously didn’t bother you suddenly become annoyingly uncomfortable.

“You solve the problem when the anxiety drops because the body chemistry drops, and they relax, so the pain drops. This isn’t just managing pain. Some people actually go to pain-free,” Hanscom said.

But, like Ozanich, Hanscom says the biggest obstacle to his non-invasive option is the patients themselves.

“They say, ‘This is crazy. I want surgery,'” said Hanscom. “But if they come in with leg pain, the research says that you need to calm them down, get them to sleep at night, and stabilize medication before you do surgery, and if you don’t address those issues before surgery, people don’t do very well.”

For those patients willing to devote some time and energy into unearthing the emotions that dwell just beneath their pain, Hanscom says most will cancel their surgery, even those with major structural problems.

Hanscom hasn’t just observed this in his patients. The major catalyst for his insight was a long and excruciating personal bout with chronic pain that wouldn’t let up until he looked inside.

“When I actually dealt with my own anger issues—which I was not aware of—within about six weeks my symptoms started to disappear,” he said.

Low back pain is the No. 1 cause of disability worldwide. In the United States alone, spinal surgery is a $12 billion dollar market.

But Ozanich says that even if surgery is successful, a person may still suffer from TMS.

“If you take away a symptom by an artificial means—surgery, drugs, manipulation, or whatever—the brain will not be denied, it will simply shift to another symptom,” he said. “I have seen people who have TMS in their tooth and they get it pulled and it moves on to the next one.”

Like pain, addiction can serve as a crutch to protect an individual from painful emotions, Ozanich says. Drinking and drugs can mask TMS for a while, but when the person finally comes clean, pain is likely to emerge to keep the dark feelings stuck in the shadows until the person is ready to face them.

One of Ozanich’s clients—a reformed alcoholic who came to him complaining of stomach pain—had previously visited several physicians, but none could find a cause.

The stomach pain emerged within 24 hours of when he stopped drinking. Ozanich explained that it was merely another diversion the brain had created to fill the void once the alcohol was gone.

“We took away the diversions and all he had left was the raw emotion that was at the bottom of all of his problems,” Ozanich said. “He fought through that and he’s fine now. He actually opened up an addiction clinic.”

Hanscom and Ozanich each have their own techniques for helping people face their painful emotions, but both say the first step is to understand the real cause.

“It’s really about somebody being ready to heal. If somebody is not ready, they will scream and yell and walk out of the room,” Ozanich said.

Hanscom points to strict time constraints imposed by the industry that make gaining a deeper understanding of an individual patient nearly impossible.

“Today in modern medicine, patients have almost become like target practice—we’re just giving them random treatments without any thoughts behind them,” he said. “You walk in, get some test or injection, and walk out. But that’s not really medicine.”

According to a 2015 report from the National Institutes of Health, about 25 million Americans (about 11 percent of the U.S. population) are in chronic pain. But now that opioids are supposed to be off the table for most patients, the medical establishment is at a loss for how to treat it. Hanscom believes that if patients and doctors can acknowledge the emotional root of the protective process behind pain, it could change the world.

“A lot of societal problems right now are driven by anxiety and fueled by anger,” he said. “I think there are major societal implications to getting this diagnosis correct.”