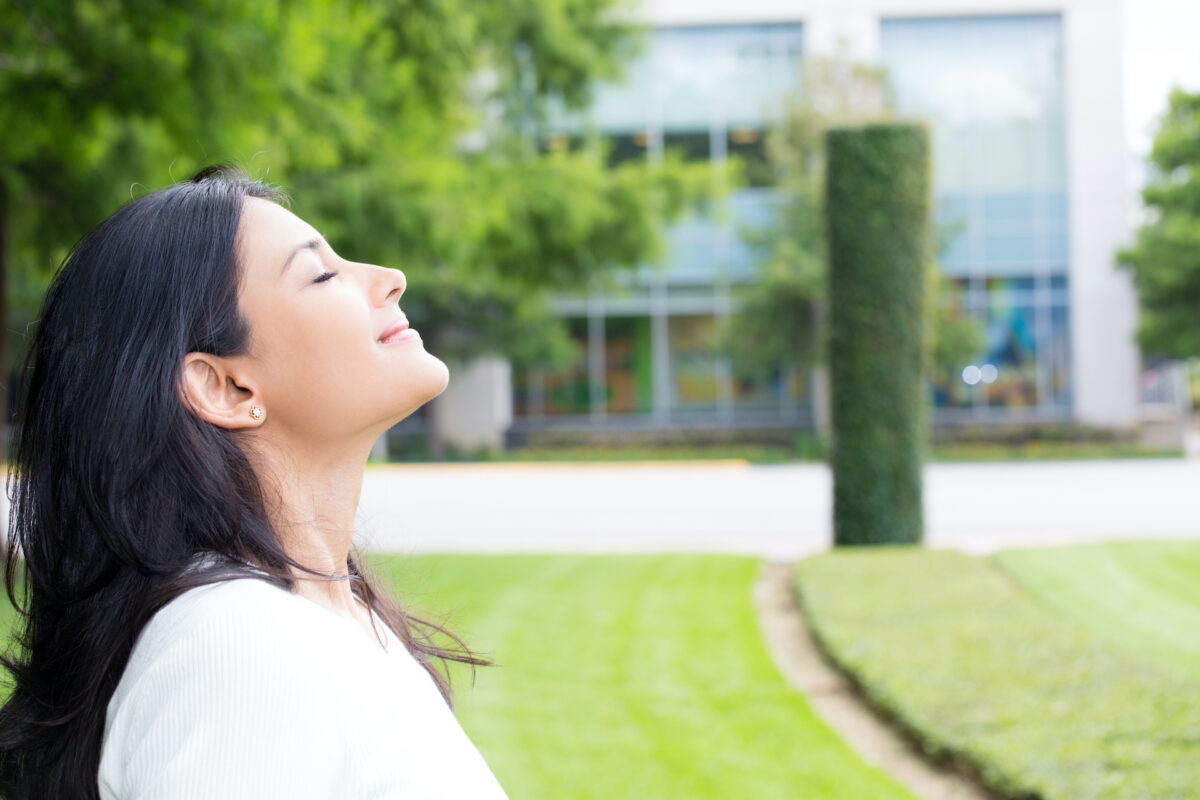 Outdoor air, infused with the molecules of a million plants and biochemical process, has powerful healing effects we are only beginning to understand. (AshTproductions/Shutterstock)
Infectious Diseases

Why Being Outside Is a Natural Way to Control Infections

A mysterious phenomenon dubbed the ‘open-air factor' refers to the germicidal properties of outdoor air
BY Joseph Mercola TIMEAugust 8, 2022 PRINT

The healing properties of fresh air have been appreciated since ancient times,1 when Pliny the Elder (A.D. 23–79) recommended that people with tuberculosis breathe in the air of evergreen forests. We now know that air happens to be high in ozone, a known germicidal agent.2

In more recent history, outdoor air was considered part of the standard treatment for tuberculosis and other infectious diseases.3 Ironically, the “high-tech” hospitals of modern day, with their enclosed, indoor close quarters, may be facilitating the spread of disease far more so than open-air hospitals of yesteryear.

During the 1960s, scientists working on biodefense research coined the term “open-air factor,” or OAF, to describe the germicidal component of outdoor air that was capable of killing pathogens and reducing their infectivity.4 Interest in the use of open air to promote health and reduce infectious disease fell away by the 1970s, however, and has remained largely ignored since.

In a review article published in Cureus, infectious disease expert Peter Collignon with the Australian National University is calling for urgent further investigation into OAF, particularly as it relates to COVID-19, stating, “We need to act without delay, as there is already sufficient evidence to show that public health generally would improve if more emphasis was placed on increased exposure to outdoor air.”5

The History of Open-Air Healing

According to Collignon, the healing effects of outdoor air were “widely exploited” during the late 19th and early 20th centuries. “Firstly, in the treatment of tuberculosis patients who underwent ‘open-air therapy’ in sanatoria; and secondly by military surgeons during the First World War,” he wrote. “They used the same open-air regimen in specially designed hospital wards to disinfect and heal severe wounds among injured soldiers.”6

English physician John Coakley Lettsom (1744–1815) was among the first advocates of what later became known as the “open-air method.” He exposed children who had tuberculosis to “sea air and sunshine at the Royal Sea Bathing Hospital in Kent, England, in 1791,” according to an article published in the American Journal of Public Health in 2009.7

The germicidal effects of fresh air were further harnessed during the 1918 to 1919 influenza pandemic, when it was common to place the sick outdoors in tents or in open-air hospitals. Records from an open-air hospital in Boston during the Spanish flu outbreak suggested that patients and staff there were spared the worst of the outbreak.8

Fresh air and sunlight are two things notably lacking in modern hospitals, but they were in abundance at the Camp Brooks Hospital, which treated hundreds of patients during the 1919 influenza pandemic. Treatments took place outdoors to maximize sunshine and fresh air.

The surgeon general of the Massachusetts State Guard, William A. Brooks, reported that in a typical general hospital with 76 influenza cases, 20 patients died in a three-day period, while 17 nurses became ill. “By contrast,” the researchers wrote, “according to one estimate, the regimen adopted at the camp reduced the fatality of hospital cases from 40 percent to about 13 percent.”9

In the case of a future pandemic, they noted, improvements in air-handling units and portable filtration units may be warranted for hospitals and other buildings but, even better, “more might be gained by introducing high levels of natural ventilation or, indeed, by encouraging the public to spend as much time outdoors as possible.”10

Later, in the 1950s, an open-air regimen was proposed as a mass treatment for burns in the event of nuclear war. “Under such disaster conditions, adequate numbers of dressings and the facilities for their use were unlikely to be available,” Collignon wrote. “The open-air regimen was considered the only viable treatment. Control of infection was considered to be the ‘outstanding feature’ of this approach.”11

There are multiple factors that reduce infection risk in outdoor spaces. Infectious particles are more rapidly diluted and dispersed, for starters, while temperature and humidity variations could inactivate viruses. Ultraviolet light from the sun is also known to inactivate viruses such as influenza and coronaviruses,12 not to mention that sunlight would have boosted patients’ vitamin D levels, a deficiency of which may increase susceptibility to influenza and other respiratory infections.13

However, the direct germicidal properties of outdoor air are blatantly overlooked, despite a 1968 study published in the journal Nature that revealed a germicidal property in rural air.14 The experiments showed that outdoor air was more lethal to airborne pathogens than indoor air, and the scientists developed a technique to measure the effects of outdoor air on the survival of bacteria, viruses, and spores. Collignon explained:15

“Tests were initially carried out during the hours of darkness as, in common with other bacteria and viruses, E. coli are rapidly killed by sunlight. The E. coli samples exposed to outside air usually died off rapidly, but not so indoors.

“On some occasions, the E. coli samples in free air lost viability in 30 minutes, whereas those in enclosed air survived for several hours. The bactericidal effect varied from night to night, and it disappeared rapidly in any form of enclosure.”

In addition to E. coli bacteria, outside air was also effective against viruses and other bacteria, including Brucella suis, Francisella tularensis, Staphylococcus epidermidis, Streptococcus group C, and Serratia marcescens.

The germicidal component of the air was dubbed OAF, but the researchers were unable to identify what, exactly, it was composed of at that time. In the 1970s, other researchers determined that OAF wasn’t a single compound but rather “a mixture of highly reactive chemical species which varied in composition.”16

In 2021, experts in atmospheric science again revisited OAF, agreeing that no single molecule or class of molecules appear to be responsible for the high levels of bactericidal activity reported.17 They even concluded that hydroxyl radicals (HO), components of OAF known to kill airborne pathogens, aren’t responsible for the observed germicidal activity. They concluded:18

“We identify other potential candidates, which are formed in ozone–alkene reactions and have known (and likely) germicidal properties, but the compounds responsible for the OAF remain a mystery.”

The ongoing mystery of how OAF works may be a key reason why it continues to be neglected in public health and infection control, Collignon stated,19 although the fact that fresh air is free and unpatentable is another likely factor.

The research into OAF in the 1960s found that the germicidal effects of outdoor air could be preserved in indoor simulations if ventilation rates were high enough.20 Specifically, 30 to 36 air changes per hour were necessary to preserve OAF. In other words, the entire volume of air in the space would need to be replaced every two minutes or less. A typically sealed modern building replaces only about 63 percent of the total air volume each hour, relying on ducting and circulation fans, according to the book “Indoor Air Quality and HVAC Systems.”

Research into older, pre-1950s hospital wards used by tuberculosis patients—which had multiple large windows and tall ceilings—suggest they had ventilation rates of 40 air changes per hour—and lower tuberculosis infection rates compared to more modern hospitals.21 The reality is that modern-day hospitals are super-spreaders of disease.

One rapid review and meta-analysis of 40 studies found a high rate of nosocomial (originating in a hospital) infections, noting, “As patients potentially infected by SARS-CoV-2 need to visit hospitals, the incidence of nosocomial infection can be expected to be high.”22

The researchers searched for case reports on nosocomial infections of COVID-19, SARS (severe acute respiratory syndrome), and MERS (Middle East respiratory syndrome) and found that, among the confirmed patients, the proportions of nosocomial infections were 44 percent for COVID-19, 36 percent for SARS, and 56 percent for MERS. Medical staff were believed to have accounted for 33 percent of the nosocomial COVID-19 cases, with nurses and doctors the most commonly infected medical staff.

Meanwhile, the importance of proper ventilation continues to be largely ignored, even as a study by the Centers for Disease Control and Prevention found that improved ventilation, such as opening a window, reduced COVID-19 cases in Georgia schools more so than mask mandates for staff and teachers.23 According to Collignon:24

“Decades ago, hospitals and other building types were designed to prevent infections from spreading. High levels of natural ventilation were an absolute requirement.

“Today they are not. Fresh air is no longer considered to be germicidal or therapeutic for hospital patients or, for that matter, anyone else. Buildings are no longer designed for free access to it. For example, windows are smaller, ceilings are lower, cross-ventilation can be difficult if not impossible, and balconies and verandas are not as common as they once were.”

It’s Time to Rediscover the Power of Fresh Air

It was 1914 when Dr. Robert Saundby, professor of medicine at Birmingham University, stated, “Why have we been so slow to recognize that fresh air is the best tonic, the best antiseptic?”25 Collignon believes it’s time to again devote our attention to the importance of fresh air—in hospitals, schools, offices, and other buildings—and harness its healing effects in the prevention and treatment of infectious disease. He’s calling for:26

On a personal level, it’s important to take advantage of the restorative powers of fresh air as much as possible by opening windows and spending time outdoors, particularly in natural areas.

Further, Collignon suggests that “’rediscovering’ open-air wards and the open-air regimen” may be beneficial for hospital patients, while harnessing OAF can also be useful for reducing disease transmission in the community, including in schools, homes, offices, and other large buildings.27