While Watching Shen Yun ‘I felt at one with everything,’ Says Artist 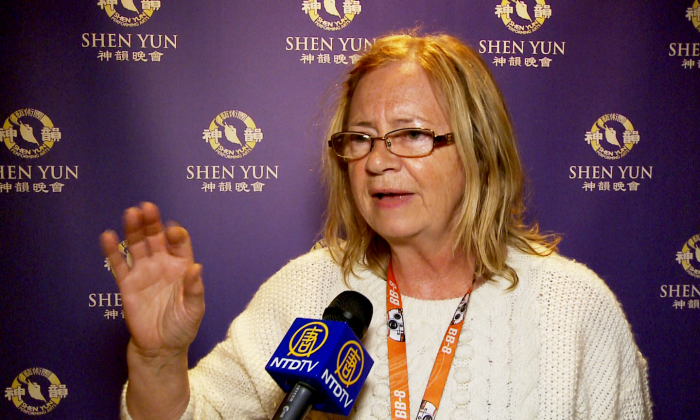 Nurse and artist Frances Abley attended Shen Yun at Hamilton Place Theatre on May 11, 2016, and found it a very moving experience. (NTD Television)

“It touched me. It touched me deeply inside, right the way down, and sat in my belly and circled in my belly. And I felt really, really solid and belonged. I felt at one with everything. How else can I say it? It was glorious. I really don’t have words to describe the feeling,” she said after the show.

“I was humbled, so deeply, deeply humbled. I wanted to cry, but I didn’t need to cry,” she added.

“Everything that I experienced on the stage—I experienced innocence, pure innocence; fabulous movement of the dancers that just swept across; the colour; the scenes from China; the blossoms; the mountains.”

New York-based Shen Yun was founded in 2006 by overseas Chinese artists who wished to revive the traditional culture—a culture that was virtually destroyed through various communist campaigns like the Cultural Revolution. According to Shen Yun’s website, “the cultural essence of respect for the divine” formed the heart and soul of traditional Chinese culture, and this is what the group is bringing back.

“Everything was perfect, in harmony with the earth,” said Ms. Abley.

She was particularly touched by the lyrics of Shen Yun’s vocal soloists, who sing in bel canto operatic style in Chinese. The lyrics, which reflect philosophically on life and contain deep layers of meaning, are translated on the backdrop.

“The words—I loved the music and the songs, but the words helped me to understand and it was so true, and such a good teaching for humankind. Don’t despair. Just believe that you’ll be fine and walk with hope in your heart. So I feel renewed, and healed, and I think I almost experienced a deep trance, a good trance, sort of like being caught in the wave. And I felt very safe, and loved,” she said.

“I love all the ancient Chinese stories,” said Ms. Abley. “And the history—magnificent.”

She said she was taking home a sense of innocence and love from seeing the performance.

“Innocence; great, great love. [The show is] an amazing masterpiece of beauty and artwork and story and drama. And I’m humbled, very, very humbled. And I’m grateful. And I appreciate.”