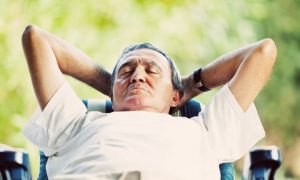 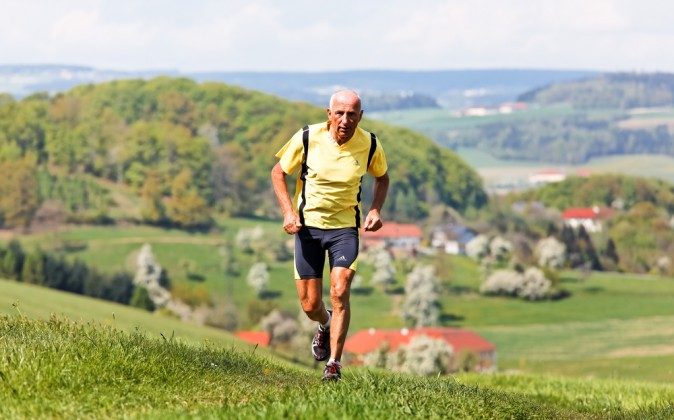 When It Comes to Aging Well, It’s Mind Over Matter

For many, “aging” is synonymous with aches and pains, forgetfulness, loneliness, and ultimately death. Aging is inevitable, but research actually shows that how you think about it can make a big difference in how gracefully you age.

As it turns out, holding on to negative stereotypes about aging may have a significant impact on your quality of life, preventing you from living to full capacity as you age.

In one study, psychological intervention designed to strengthen positive age stereotypes actually resulted in increased mobility and strength. As reported by the New York Times:

“Over and over, they’ve found that those who hold more positive age stereotypes behave differently as they age from those with more negative stereotypes, even when the groups are similar in other ways, including health status…

This year i turned 60 and thought I would learn to do a handstand. With the help of my trainer Arnold Kolozsvari he helped me learn how to do one. It took me over four months but  as you can see in the video above, persistence paid off. Would definitely not try it without a spotter though.

The study in question, published in Psychological Science, investigated ways to uplift people’s views on aging, and then looked at how this new mindset affected their physical strength.

Proving the mind-body connection yet again, the results showed that taking a more positive view actually led to stronger physical functioning, even without added exercise.

Follow-up tests revealed that the implicit (subliminal) intervention had a significant impact, strengthening positive age stereotypes and self-perceptions of age over a longer term.

At one week, and again three weeks after the final association exercise, the participants were asked to perform a variety of physical tasks, such as repeatedly standing up and sitting down, walking across a room, and holding challenging poses to test for balance. As reported in the featured article:

“The group exposed to implicit positive messages showed significant improvement in physical function, compared to their status before the experiment began. Those who participated in the explicit intervention and wrote essays showed no improvement.

In fact, the people who underwent four brief exposures to implicit positive messages showed greater physical improvement than a group of a similar aged, enrolled in a different study, that actually exercised for six months.

…The implicit approach may have more impact than explicitly positive messages, Dr. Levy said, because it thwarts resistance. ‘People have encountered negative stereotypes for so long, in media and marketing and everyday conversations, that people build up ways to hold onto them,’ she said. ‘Implicit interventions can bypass that.'” [Emphasis mine]

When thinking about aging, it’s important to remember that your age in years is only a number. I know it sounds cliché, but it’s very true, especially if you begin to apply foundational health principles in your life that allow your body to function at its peak. Recently Norwegian researchers created an online calculator for determining fitness age. You can take the online test for free. This year, I turned 60 but my fitness age according to this calculator is half that—30 years old.

As my test shows, it is possible for a 60-year-old to be just as fit, biologically speaking, as a 30-year-old, or even more fit, depending largely on lifestyle. So your age in years is just a numerical measurement, but your real age is your biological age as dictated by your choices and habits.

Your lifestyle has far more influence on your health at any age, and this includes not only the obvious like healthy eating and effective exercise, but also tending to your emotional needs by deciding to be happy, thinking positively, socializing and seeking out new and exciting experiences, and yes, associating aging with positive stereotypes instead of negative ones.

While society now programs us to think of the elderly as hopelessly incapable in just about every way, you can choose to take a different view. It really wasn’t all that long ago that people revered their elders for their accumulated wisdom and life experience. Barring access to positive subliminal programming, such as that used in this test, you can choose to think of aging as having benefits—regardless of your current age today.

The way you think about aging may in fact play a role in how old you “allow” yourself to get. The majority of centenarians—people who live to be 100 years old or older—report feeling about 20 years younger than their chronological age, and their mindset has a lot to do with this self-perception. Most centenarians, regardless of their health status, tend to have positive attitudes, optimism, and a zest for life. Could it be that personality characteristics and worldviews play a more significant role than genetics, diet, or exercise? Perhaps!

One way to determine this is to ask centenarians questions about how they see the world, what they value, and to what they attribute their own longevity. What are their secrets to aging well? These individuals represent centuries of wisdom that should not be overlooked. Mining the minds of centenarians for nuggets of wisdom, researchers have been able to detect a definitive pattern of thinking and behavior among the eldest among us. Centenarians overwhelmingly cite stress as the most important thing to avoid.

Those who have lived 100 years or more on this earth have undoubtedly experienced a number of stressful events, but as a general rule, they manage their stress really well. Rather than dwelling on it, they let it go. And most often, they choose to be happy—despite everything.  In interviews and surveys with centenarians, the following themes also come up time and time again when asked to explain “why they’ve lived so long:”

For a comprehensive guide on healthy eating, please see my optimized nutrition plan. Generally speaking, you’ll want to focus your diet on whole, unprocessed, ideally organic foods (vegetables, grass-fed meats, raw dairy, nuts, and so forth). In terms of foods to avoid, processed foods and beverages of all kinds top the list, as they’re chockfull of sugar, refined fructose, and grains—all of which promote insulin and leptin resistance when eaten in excess. Insulin/leptin resistance in turn is at the heart of most chronic disease, from obesity to arthritis, cancer, and dementia. A sugar-rich diet is also a major cause of accelerated cellular aging, breaking down your body well before its time.

According to Professor Cynthia Kenyon, whom many experts believe should win the Nobel Prize for her research into aging, carbohydrates (glucose) directly affect the genes that govern youthfulness and longevity. Her research suggests you may actually be able to extend your life and stay fit throughout your old age with a simple dietary change that switches on your “youth” gene.

Kenyon’s research with C. elegans roundworms showed that decreased carb intake can lead to significant life extension and improved long-term health. One of the most interesting details of her findings is that not only did the roundworms live up to SIX TIMES longer than normal, but they kept their health and youthful vigor until the end—and isn’t that what “healthy aging” is really all about? Besides being high in sugar/fructose, processed foods also contain a wide variety of other harmful substances that can wear down your health, including synthetic chemicals (colors, flavors, preservatives, stabilizers, etc), genetically engineered ingredients, and pesticides, just to name a few.

Exercise Is an Excellent ‘Anti-Aging’ Tool

Besides diet and maintaining a positive mindset, exercise is perhaps one of the best “anti-aging” interventions available. It’s worth noting that exercise has also been shown to have a positive effect on depression, and may in fact help you see the sunnier side of life. Staying active is particularly important for the elderly. I recommend incorporating a variety of exercises into your regimen, but strength training may be particularly beneficial if you’re older. A 2010 study published in the journal Mechanisms of Aging and Development confirmed the “anti-aging” effect of high-intensity training, which forms the foundation of my Peak Fitness regimen.

Strength training can be turned into a high intensity exercise by slowing down your movements, and it also tends to be safer than conventional weight lifting or sprinting exercises. One of the key benefits of high-intensity exercises is that it boosts human growth hormone (HGH) production, which is important for optimal health, strength, and longevity. To boost the “anti-aging” benefits of high intensity exercise even further, consider combining it with intermittent fasting. This may in fact be a revolutionary way to keep your body biologically young.

To Live Longer, Learn to Manage Your Stress and Think Positively

Interviews with centenarians across the world reveal that having a positive world view is part and parcel of enjoying a longer-than-normal life. This makes sense when you consider how potent a component your emotions are for your health. Your emotional state plays a role in nearly every physical disease — from heart disease and depression, to arthritis and cancer. And as demonstrated in the featured research, just associating aging with positive stereotypes instead of negative ones has the power to affect your ability to perform physical tasks.

Having effective coping mechanisms to deal with everyday stressors are a major longevity-promoting factor in part because stress has a direct impact on inflammation, which in turn underlies many of the chronic diseases that kill people prematurely every day. Meditation, prayer, social support, and exercise are all viable options that can help you maintain emotional and mental equilibrium. I also strongly believe in using simple tools such as the Emotional Freedom Technique (EFT) to address deeper, oftentimes hidden, emotional problems. In short, living a long life boils down to an overall healthy lifestyle, where mind, body, and spirit all get the appropriate attention.

*Image of “senior jogger” via Shutterstock