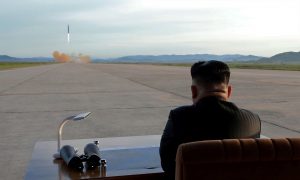 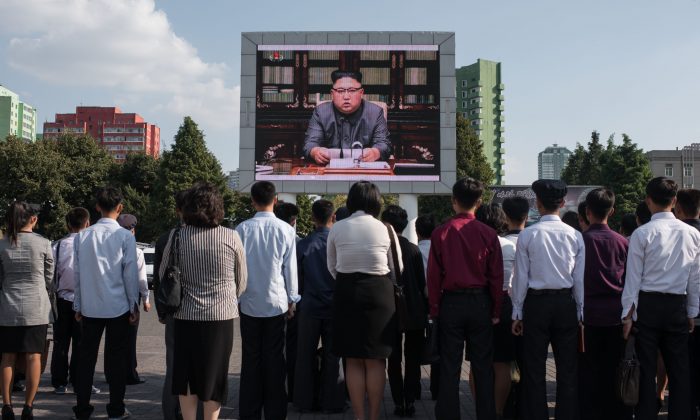 The president is combining economic, diplomatic, and military efforts to push North Korea to abandon its nuclear weapons program
By Jasper Fakkert
Print

President Donald Trump is running an unprecedented pressure campaign against North Korea, in an attempt to avoid war and prevent the regime from obtaining nuclear weapons.

While the isolated state does not yet have the ability to successfully launch a nuclear warhead fitted on a ballistic missile, experts believe it’s just a matter of time.

During this crucial window of time, Trump is going all out to pressure North Korea to abandon its nuclear weapons program through economic, diplomatic, and military means.

The approach is largely two-fold. On one hand, Trump has instructed his secretary of state and other senior cabinet officials to pursue diplomatic means while also increasing economic pressure through sanctions. On the other hand, Trump is building up the U.S. military and drawing up plans for a military conflict should diplomatic efforts fail.

“I think he does want to be clear with Kim Jong Un, that regime in North Korea, that he has military preparations ready to go,” Secretary of State Rex Tillerson told CNN on Oct. 15.

“But be clear, the president has also made clear to me that he wants this solved diplomatically. He is not seeking to go to war,” Tillerson said.

He said that the diplomatic efforts “will continue until the first bomb drops.”

Trump’s message of military might has been plenty clear.

Just last week, two U.S. nuclear-powered submarines, each equipped with Tomahawk cruise missiles, docked in South Korea. While it is not uncommon for submarines to operate in the region, it is rare for their locations to be disclosed, which was likely intended to send a message to Kim Jong Un.

Since coming to office, Trump has significantly increased military spending. He said last week that spending will top $800 billion this year, with a significant portion to be spent on new equipment such as fighter jets and warships.

Together with his most senior military officials, including Defense Secretary Gen. Jim Mattis and Chairman of the Joint Chiefs of Staff Gen. Joseph Dunford, Trump has drawn up detailed scenarios for a military conflict with North Korea.

Both Trump and Mattis have alluded to the most drastic military option of all: the complete destruction of North Korea. Last month, speaking before the U.N. General Assembly, Trump said that the United States could “totally destroy” North Korea if the United States or its allies were forced to defend themselves.

Mattis made similar comments earlier, saying the United States does not seek to attack North Korea, but has “many options” for the “total annihilation” of North Korea if needed.

At the annual meeting of the Association of the U.S. Army last week, Mattis said that while U.S. efforts regarding North Korea are currently diplomatically led, the Army should “be ready” to go to war if needed.

U.S. forces have also conducted multiple military drills with allies in the region in recent months. This week, the Navy is conducting major exercises with South Korea.

On Oct. 10, the U.S. Air Force flew two bombers over the Korean Peninsula during a 12-hour mission, accompanied by Japanese and South Korean fighter jets.

Along with the military buildup, the Trump administration has made great efforts to pressure North Korea into complying with international demands to abolish its nuclear program.

Most significantly, Trump has been able to gain broad international support against the rogue regime.

“We now have the most comprehensive sanctions in place that have ever been put in place, to strangle the North Korean regime’s economic revenue streams,” Tillerson said.

The Trump administration has also been able to get North Korea’s closest ally, China, on its side.

“We have China now joining us in putting pressure on North Korea in ways that has never been achieved before, and I attribute a lot of that to the very strong relationship President Trump has with President Xi,” Tillerson said.

Tillerson said that since coming to office, Trump has met with Xi several times in person and has frequent phone contact with him.

Trump had called on China—both behind closed doors and in public—to help the United States put pressure on North Korea.

In August, China announced it was halting imports of coal, iron, and lead from North Korea. In September, after North Korea conducted a sixth underground nuclear test, the Chinese regime voted in favor of new sanctions.

For years, China has been North Korea’s lifeline. This close relationship between the two communist regimes was established by former Chinese Communist Party leader Jiang Zemin.

But while Jiang has been officially out of power since 2003, he has still played a major role in influencing China’s domestic and international policies from behind the scenes through loyalists in key government positions. These policies include the persecution ordered by Jiang of the spiritual discipline Falun Gong, which continues to this day despite Jiang being out of power.

China’s new stance on North Korea means that Xi is succeeding in consolidating power and reducing the once-ubiquitous influence of Jiang.

The sanctions specifically target the supply of natural gas and oil to North Korea. It also bans all textile exports from North Korea.

Trump has said that the situation would have been a lot easier to take care of 25, 10, or even five years ago.

He has pointed to the fact that a deal reached by then-President Bill Clinton in 1994—in which the North Korean regime was provided with financial aid and two light-water nuclear reactors in exchange for an end to its nuclear weapons program—was later violated.

When speaking about Iran and its nuclear weapons program last week, Trump pointed to North Korea as an example of a situation that becomes increasingly dangerous if not addressed.

The threat of Iran having a nuclear weapon that could reach the United States is not as urgent as that of North Korea, but the Islamic regime is poised, under the agreement signed under President Barack Obama in 2015, to have a nuclear weapon by 2026. At that point, key restrictions on Iran’s nuclear program will be lifted, allowing the regime to install thousands of advanced uranium centrifuges capable of producing a nuclear bomb within six months.

Trump announced on Oct. 13 that he will not recertify the Iranian nuclear deal before Congress. He also said that his administration will try to renegotiate or pass an additional agreement to address key weaknesses in the deal.

The main weaknesses include the expiration date on certain restrictions and the fact that Iran’s ballistic missile program is not part of the nuclear agreement.