More than 10,000 Falun Gong practitioners subject to detention, harassment in China this year 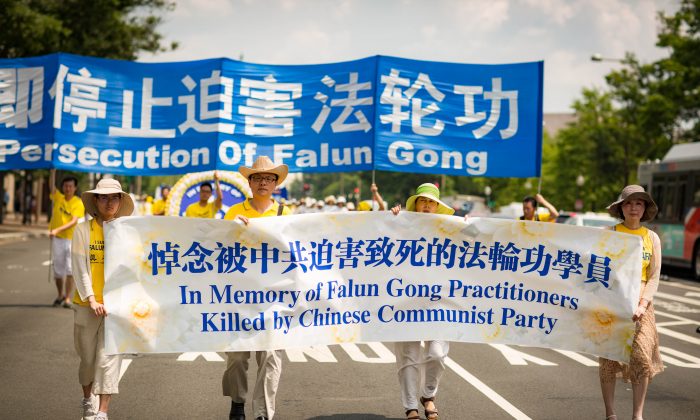 Hundreds of Falun Gong practitioners march in Washington, D.C. to call for an end to the persecution of practitioners in China, on July 20, 2017. (Benjamin Chasteen/The Epoch Times)
By Annie Wu

Yang Guanren, a regional president for a major corporation headquartered in Beijing, was on a business trip. While on a cab from Guangzhou City to Shenzhen City on May 15, 2017, Yang talked to the driver about the ongoing persecution of the Falun Gong spiritual practice in China.

Falun Gong, also known as Falun Dafa, is an ancient self-improvement that involves meditation and living according to the principles of truthfulness, compassion, and tolerance. The practice’s benefits to physical and mental health led to its widespread popularity, with more than 70 million adherents in China by 1999, according to a state survey. Practitioners say their numbers reached more than 100 million.

The Chinese regime perceived Falun Gong’s presence as a threat to its authoritarian rule and began a campaign to eradicate the practice in July 1999. The official press office for Falun Gong, the Falun Dafa Information Center, estimates that millions of Falun Gong adherents have been arrested and detained since the persecution started, often enduring torture and abuse while imprisoned. The regime also launched mass propaganda campaigns in an effort to turn public opinion against Falun Gong practitioners.

Yang is the latest victim of the persecution.

After hearing Yang talk, the driver proceeded to drive to the local Yuehai Police Station, and ratted Yang out to police as a Falun Gong practitioner. The authorities arrested Yang.

Yang’s family was notified by police that he will be released 30 days later upon paying bail. But when the 30th day arrived and Yang’s family went to the Nanshan District Detention Center where Yang was being held, the center refused to release him or grant the family a visit.

The family has hired an attorney to assist them, but has been unable to secure Yang’s release, despite appealing to the local Procuratorate office, according to Minghui.org, a U.S.-based website that tracks the persecution of Falun Gong in China.

Yang’s family also told the website that domestic security forces went to Yang’s hometown and ransacked his parents’ home, both of whom are over 80 years old. Yang’s mother was in such great distress that she was bedridden for many days, the family said.

The persecution still continues to affect thousands of practitioners across China. From January to June 2017, at least 3,659 Falun Gong practitioners have been taken away by authorities and detained, while 7,209 have been subject to authorities’ harassment, according to Minghui.org’s latest estimates. Because of the tight control on information in China, these estimates may be much lower than the actual numbers.

Detention and harassment happened across the country, with reports from 30 provinces, autonomous regions, and centrally governed municipalities.

The detentions were concentrated in four provinces, with Shandong, Liaoning, Hebei, and Jilin with the highest number of detained practitioners.

The Ministry of Public Security, the Central Political and Legal Affairs Commission, and the extralegal 610 Office—created in 1999 as a Gestapo-like body to specifically target Falun Gong practitioners—remain the primary authorities tasked with carrying out the persecution.