What It’s Like To Play French Horn With Chinese Instruments 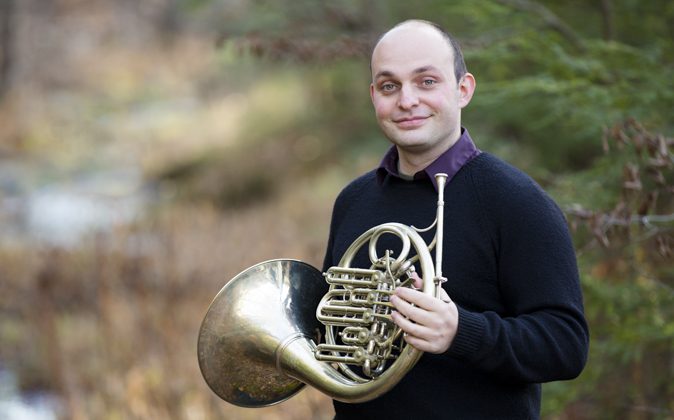 Georgi Boev, a French horn player, was used to being the loudest sound in the orchestra pit. That was, until he joined Shen Yun Symphony Orchestra and heard the “suona.”

The suona is a powerful woodwind instrument with a sound that’s akin to a cawing bird. It can imitate human speech, laughter, and various animal noises, and is usually played to express a festive or comical moment. It is also very, very loud.

“I just follow the suona. Can’t do anything about it,” Boev said genially.

Since joining Shen Yun Orchestra in 2013, Boev has enjoyed new and innovative musical experiences—such as hearing the triumphant sound of the horn harmonize with elegant Chinese melodies.

The Shen Yun Orchestra is the live orchestra that accompanies Shen Yun Performing Arts, a New York-based classical Chinese dance company that performs at top venues such as the Kennedy Center in Washington and the London Coliseum.

Its orchestra is unlike any other because it comprises both Eastern and Western instruments.

As Western instruments such as the timpani, trumpet, and violin provide the harmony and grandeur of a traditional symphonic orchestra, the Eastern instruments play exquisitely Chinese melodies.

The “pipa,” a plucked instrument also known as the Chinese lute, is among the Chinese instruments that play melodic solos in Shen Yun Orchestra.

According to traditional Chinese beliefs, the pipa’s dimensions are meant to reflect the structure of the universe. The instrument’s body—which is 3 feet and 5 inches—represents the triad of heaven, earth, and humans, and the five elements of metal, wood, water, fire, and earth. Its four strings symbolize the seasons.

When struck, the “qing” (also known as a chime bowl) creates a sacred ringing sound that reverberates throughout the theater.

The combination of such Eastern and Western instruments creates a rare sound that is both regal and delicate at once.

“It’s never been done before, so the theater is always full,” Boev said.

Finding His Passion for Music and Life

Boev said he never truly worked hard before coming to Shen Yun because he never had to. He had always been musically inclined.

Boev has performed with orchestras such as Northern Ballet in Leeds, the BBC Philharmonic, and the Hallé Orchestra in Manchester. He even co-founded Northern Brass, an award-winning brass quintet.

But he wasn’t truly happy, nor did he love music. “Music was something that I was good at, and it paid the bills,” he said.

It wasn’t until he became a Falun Dafa practitioner that he found his passion for the horn, he said.

Falun Dafa is a spiritual meditation practice based on truthfulness, compassion, and tolerance.

By applying those principles to his daily life, he has felt inspired to endure long hours of practice in order to reach his maximum musical potential.

He also said Falun Dafa has taught him to be less selfish, which in turn made him a better performer.

“I used to be very proud of being the loudest, regardless if I played well or not. I enjoyed that power,” he said, adding that it was selfish and not considerate of the harmony of the orchestra or ensemble.

Since he started applying truthfulness, compassion, and tolerance to his life, he has stopped competing with his colleagues. “Now that I’m not focused on competing, I can concentrate on the music … This has given me a new meaning to life. I feel happier.”