What Is the Chinese Violin? 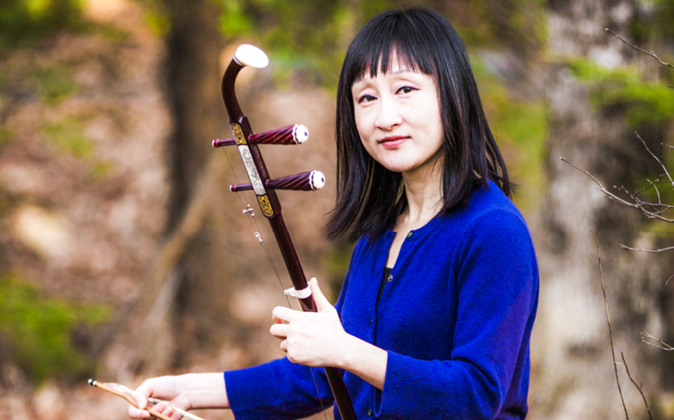 NEW YORK—A soul-stirring tune penetrated the silence of a tawny November forest in upstate New York. It was distinctly Chinese.

The sound came from a two-stringed Chinese violin called the “erhu.” And the musician playing was Xiaochun Qi, an erhu soloist with Shen Yun Performing Arts.

The erhu can mimic a human voice. It can convey a wealth of feelings: from profound grief, joy, and ire, to that sense of having found the meaning of one’s life.

Shen Yun is a New York-based classical Chinese dance company that performs in over 20 countries and 100 cities in a tour spanning five months each year. The dances are accompanied by a live orchestra that consists of an intriguing blend of Eastern and Western instruments.

Shen Yun, which embarked on its world tour in December, also showcases bel canto singing and an erhu solo in addition to classical Chinese dance and Chinese folk dance.

Audiences at distinguished theaters such as the Lincoln Center in New York and the Kennedy Center in Washington have found Qi’s performances gripping and hauntingly beautiful.

Her unusual upbringing allows her to perform fully and without stage fright, which is rare even among famous musicians.

Qi is an erhu virtuoso who grew up in close quarters in Southern China. Throughout her childhood, she practiced outdoors in order to avoid disturbing neighbors.

Her father, also an erhu player, had her practice in public spaces as early as age 6. Regardless of rain or snow, her father would still carry on with outdoor lessons every night.

Of all the Eastern and Western instruments in the Shen Yun orchestra, the erhu is considered to possess one of the greatest capacities to express deeply human emotions.

The erhu can mimic a human voice. It can convey a wealth of feelings: from profound grief, joy, and ire, to that sense of having found the meaning of one’s life.

The erhu has a 4,000-year-old history in China. Traditional Chinese culture believes that sound can harmonize the universe as well as the individual. In ancient China, erhu music was not merely performed for entertainment, but also to lift a person’s state of mind and purify one’s thoughts.

The erhu can also capture the specific characteristics of Chinese ethnic groups through special sliding techniques.

From the simple life of girls collecting water in rural China, to the regal elegance of daughters of Manchurian aristocrats, the erhu can channel the feeling of daily life as influenced by local environments and traditions.

The erhu can also imitate animal sounds—such as neighing and the canter of galloping horses.

Although the erhu is often compared to the violin, it is actually held vertically on the lap of a seated musician. There is no fingerboard. And instead of a separate bow, a bamboo and white horsehair bow is permanently connected to the two strings.

The Shen Yun orchestra takes the erhu to new heights. The erhu’s Chinese melodies  are harmonized by the splendor of Western percussion, brass, woodwind, and string instruments.

The music still has a distinctly Chinese feeling, though, because Eastern instruments such as the Chinese lute, “suona,” and various eastern percussion instruments play the melodies.

Through practicing daily Falun Gong meditation exercises, Qi said she has managed to reach a state of inner peace that has removed fears and anxiety from her life.

“Since I started practicing Falun Dafa, I learned to stop concerning myself with what people thought of my performance,” she said in Chinese. “I was no longer preoccupied with those tiring thoughts, so I had more energy to focus on truly playing music.”

“Shen Yun’s music can have a purifying effect on the audience because it has a different kind of energy,” she said. “People don’t regret going to see the show. They feel refreshed.”