Wellingtonian Flies up to Auckland Just to See Shen Yun 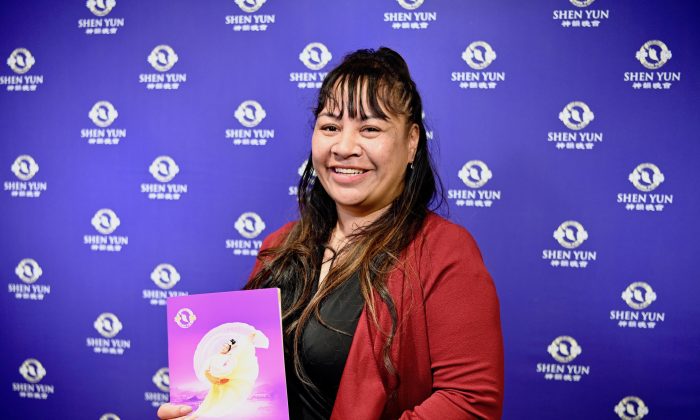 “It was exciting, it was thrilling, the tumbles, the flips and just the smiles on their faces. I was lucky enough to get one of the front row seats so I could see every expression and just the warmth that comes out of their performance is absolutely amazing.”

Hills had come with her sister to see New York-based Shen Yun.

After watching the performance, she said that the music and dance had deepened her understanding, appreciation, and love for culture.

“The only thing I see is mainly on TV, so seeing something live and personal just took everything to another level for me is great—absolutely great.”

Hills loved the solo musical performance and felt that the erhu was absolutely amazing.

The dance “Fairies of the Clouds” was also memorable for Hills, who loved the use of props to an elegant, whimsical effect.

According to Shen Yun’s program book, “Ancient legends speak of ethereal realms where celestial maidens glide amidst the clouds. As they delicately dip and swirl, their nimble beauty illuminates their heavenly world.”

Hills was also fascinated by the interaction between the backdrop and the dancers.

“Amazing technology, lovely to see them pop away and then appear in the backdrop. I thought that was intelligent technology—it was great,” she said.

According to the Shen Yun website, the company uses state-of-the-art graphics technology, and a digital-backdrop team to create “vividly animated settings, extending the stage and transporting the audience to a world where heaven and earth are one.”

Hills enjoyed the stories portrayed in some of the dances “interactive enough to keep the audience engaged, so I loved every moment of it.”

“I can’t wait till they come back again. I am glad that I came up here for this trip. It’s an over-nighter and I only came to watch [Shen Yun],” Hills said.

Hills felt happy and excited. “I have been talking nonstop since we came out of the auditorium.  So, it’s been great and I think we will go home [and] start telling family—encourage others to attend the next time [Shen Yun] comes to New Zealand.”

With reporting by NTD Television and Diane Rowe.