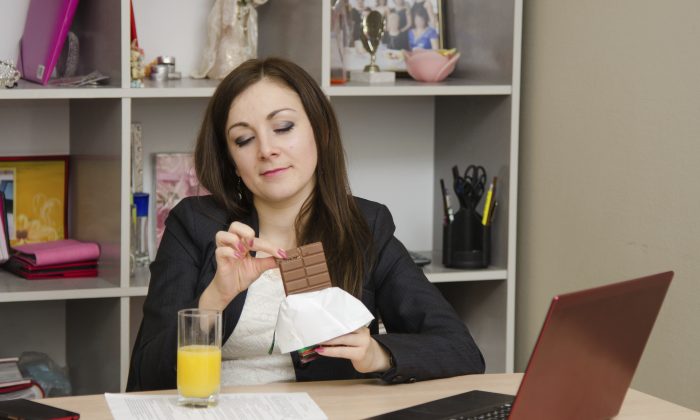 In Chinese medicine, sweets create dampness in the body, which leads to weight gain. (Madhourse/iStock)
Good to Know

Several years ago, I worked with Ralph, a guy in his midforties who was experiencing back and leg pain. Ralph came for acupuncture once a week for quite a while. After his treatments, his back and legs would be better for a few days, but the pain always came back.

The problem was that Ralph was carrying around a beer gut that had to weigh about 50 pounds, and it was putting an incredible strain on Ralph’s back and the back of his legs. Simple things like mowing the lawn would put enough stress on Ralph’s muscles that it would send him back to my treatment table for some pain relief.

Ralph isn’t unusual. Like millions of Americans, Ralph was overweight and it was affecting his health.

In fact, Ralph has lots of company. About one in three Americans are considered obese. Many of those people will never attempt to do anything about their weight, but many will. Just this past week, thousands of people came to Minnesota’s Mall of America from all over the Midwest to try out for the TV show, The Biggest Loser, in which contestants are pitted against each other in their weight loss efforts.

Some people who attempt to lose weight will be successful. In fact, today while working out, I ran into a woman who had lost 105 pounds. That’s pretty impressive and proves that it can be done. Unfortunately, most people who decide to drop the excess weight go about it in all the wrong ways.

Over the years I have worked with hundreds of patients who have attempted to lose weight. Some have been successful, some have not. Some have gone about it in seriously crazy ways that not only don’t work, but have endangered their health in the process.

Here’s my list of top weight-loss mistakes—my list of what not to do if you really want to lose weight and keep it off.

1. Magic-Bullet Thinking. If you believe that you can lose weight if only you find the right supplement, diet pill, therapy, or energy drink, you’re making this mistake. Years ago, a woman came to me for acupuncture to lose weight. Now acupuncture can help, but this woman came back after one treatment and said she hadn’t lost a single pound. Understand, she hadn’t done a single thing differently, either.

She believed that if I performed acupuncture on her, the weight would magically melt away. Good luck with that. The reality is that you need to make a commitment and some lifestyle changes in order to be successful. There is no miracle cure. If there were, we all would have heard about it.

2. Not Sticking With It. It probably took you many years to gain the weight you are now trying to lose. What makes you think you can lose it between now and your vacation in three weeks? Serious weight loss, the kind that you’re looking for is a long term project. The one thing that makes weight loss so difficult is that it takes a strong commitment over a long period of time.

3. Meal in a Can. Having a shake substitute for a real meal is a bad idea for a couple of reasons. First, in Chinese medicine, these “meal substitutes” are too nutrient dense. They are too hard to digest all at once. Second, they tend to have a lot of sugar and not enough fiber. Third, they’re not really food—just check out the ingredient list. And fourth, can you really make it from meal to meal drinking 12 oz. of whatever? At some point, you’re going to be hungry, rebel against the can, and pig out in a very big way.

4. Not Moving Your Body. You can’t lose weight unless you exercise. Simple. In Chinese medicine, fat is considered an accumulation of damp tissue that has basically stagnated, mostly around your middle, butt and thighs. The treatment for any kind of stagnation is movement, and exercise is all about movement. You don’t have to climb a mountain or run a marathon, but you do have to start somewhere—take a walk, work in your garden, or go outside and play.

5. Dieting. The problem with going on a diet is that you do it with the mindset that someday you’ll be done and go off the diet. That’s where the trouble starts. When you go off your diet, your body will immediately try to protect itself from starving, dieting, or being deprived by packing on the weight you lost, plus some.

I’ve worked with patients who have tried a number of diets, only to be heavier than ever after each one. Rather than dieting, start with smaller changes that you can sustain over the long term—like the rest of your life. Your body will thank you, and you’ll be more likely to lose the weight and keep it off.

6. Taking Diet Supplements. First of all, see Mistake #1, there is no magic pill. But secondly, some of those supplements can be dangerous. In Chinese medicine, herbal formulas are prescribed based on your very specific needs. Taking a supplement just because you heard it’s good for weight loss runs counter to this philosophy. It may not be what you need, and as such, may aggravate any health issues you have.

7. Not Dealing With Emotional Issues. I see so many patients who are suffering from stress or depression who have insatiable cravings for sugar. I have seen patients who suffer from eating disorders; either over eating, food restriction, anorexia, or bulimia. I have also worked with people who have food issues as a result of childhood abuse. If your mental health is playing a part in your weight issues, one of your best first steps is to get some professional help.

8. Eating Too Many Dampening Foods. Dampness is a result of your body’s inability to digest well and metabolize fluids. When you eat the wrong foods, your digestion gets bogged down, and you begin to gain weight and retain water.

Foods that tend to be overly dampening include greasy rich foods, saturated fats, dairy foods, and sweeteners of any kind. For a more detailed discussion on dampness and your digestion, check out Simple Steps: The Chinese Way to Better Health.

9. Not Paying Attention to What You Drink. That’s right, that double mocha espresso or those three pops you had at work are all heavy hitters if it’s calories you’re counting. Frequently, people forget to count the stuff they’ve had to drink when they’re trying to lose weight, which can derail all your efforts. Drink water or tea, or count up the calories in what you’re drinking.

*Image of “diet” via Shutterstock