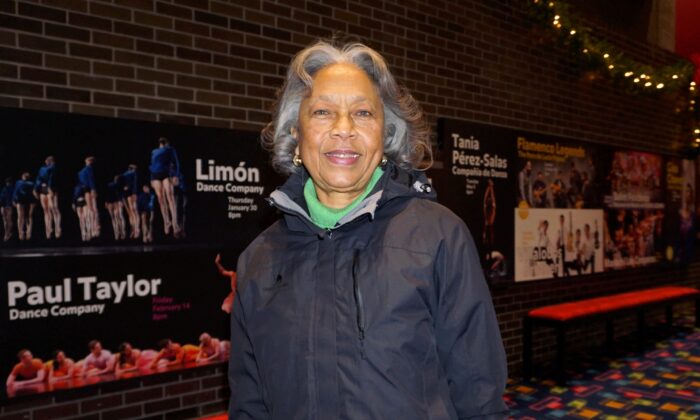 PURCHASE, N.Y.—Retired health physicist Goldie Bryant took a one-hour-long trip to Purchase, New York, to see Shen Yun Performing Arts, as she has for every year the past half-decade.

“I’ve always enjoyed beauty. Beauty is truly a joy to behold,” said Bryant, who had traveled from Rockland County and was still in high spirits while adding that she still had to travel an hour back. Bryant saw the world premiere of Shen Yun’s 2020 season at The Performing Arts Center at Purchase College on Dec. 20, 2019.

Based in New York, Shen Yun is the world’s premier classical Chinese dance company. Its mission since inception has been to preserve authentic Chinese culture and share it with the rest of the world. The company does this through classical Chinese dance, a style of dance known for its flips, spins, and tumbling techniques. This art form is the very heart of Shen Yun, according to the company’s website.

Bryant, a retired health physicist and associate commissioner of the NY State Health Department, said that she felt “special being able to enjoy what the dancers have to share.”

She also said that the versatility, exquisiteness, and visuals that the dancers expressed left her astounded.

“Oh, I feel blessed to be able to experience the quality of the performance as the dancers share with us all that they have, indeed,” Bryant said.

For Shen Yun dancers, there are more elements than the visible ones involved in ensuring a good performance. According to the program, the dancers focus on self-discipline and tempering the heart to truly bring out the best of themselves on stage.

One of the central themes in the program, and traditional Chinese culture, is the connection that humankind has with the divine, which is illustrated through the performance’s classical Chinese dance and music. Bryant responded in agreement and said she could connect with that theme.

“Oh my heavens, in one word, it’s inspiring. It’s truly a blessing to have been able to experience the performance,” she added.

Bryant discovered Shen Yun about six years ago, shortly after she lost her husband. It’s unfortunate she was never able to share the beauty and joy of it with him, Byrant said, but now her “holidays have been enriched by seeing the show” every year.

Every year, Shen Yun has an entirely different performance comprised of new sets of choreography, music, stories, and more. Bryant said that she has seen the performance for several years without ever being disappointed, and she will be back again next year.

With reporting by Sally Sun and Don Tran.