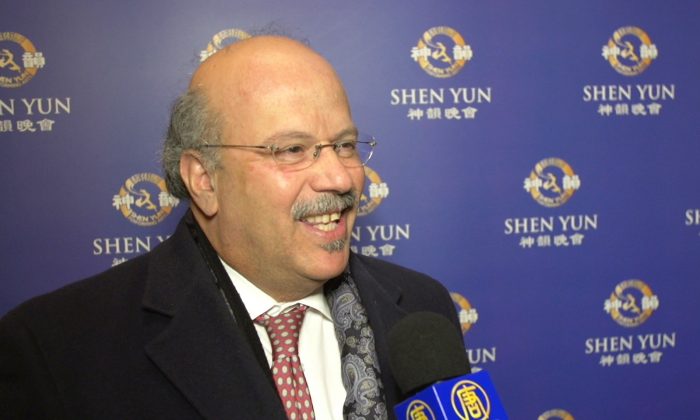 He received the tickets as a gift from his wife.

The mission of New York-based Shen Yun Performing Arts is to restore China’s divinely inspired culture, which flourished for 5,000 years yet was nearly lost in just a few decades. Through the language of dance and music, Shen Yun leaves audiences uplifted and inspired.

“It’s a wonderful fusion of East and West, but what is really so extraordinary is how visually compelling it is … the synchronicity of the dance movements is just so wonderful to watch. The colors and the movements and the athleticism of the dancers is wonderful,” said Mr. White.

“Come see it, please! Come see it before it leaves. I think it’s a wonderful, wonderful opportunity to understand the richness of Chinese culture,” Mr. White said.

Neurosurgeon Magdy Shady was also in attendance at the Jan. 11 performance.

“This was a fantastic piece of art,” she said.

She expressed her feelings about the show’s spiritual aspect, saying: “God exists. God is beautiful. Can’t get any better than that.”

Reporting by NTD and Kati Vereshaka