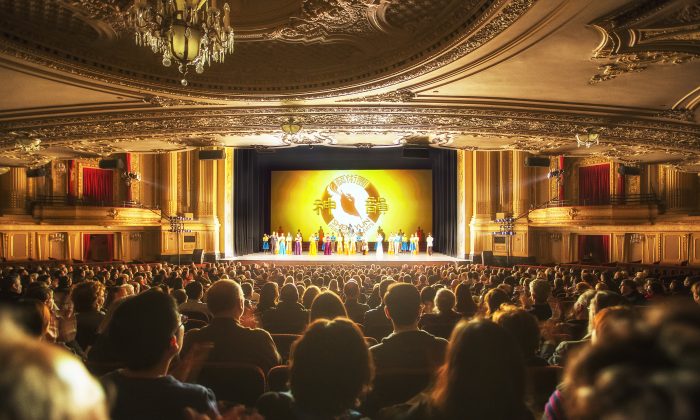 BOSTON—Shen Yun Performing Arts is billed as the revival of a divinely inspired culture. The concept is so vast—the Chinese culture is, after all, over 5,000 years old—that audience members often say they have to process the beauty of what they have seen before they can understand and articulate what it means to experience a divine culture.

John and Marilyn Pelrine, celebrating their 46th anniversary, saw New York-based Shen Yun for the second time at the Boston Opera House on Jan. 23. For Mrs. Pelrine, the depth and divinity was so clear.

“I mean, it is all divine messages here, being portrayed within the context of the ancient culture, the Chinese culture,” Mrs. Pelrine, a teacher at a Waldolf school, said. Her immediate reaction had been awe, which soon grew to something almost like reverence.

“The beauty and the grace convey a very simple, but ultimately … layers and layers deeper than ordinary three-dimensional life. It incorporates the mystical and the divine and the other dimensions, actually, in a beautifully artistic, simple and profound, amazing way for me,” Mrs. Pelrine said.

Perhaps that is because ancient China was once known as the Celestial Empire, and Shen Yun portrays legends and stories from an era where heaven, earth, and humankind were one.

Or maybe it is because, like ancient artists, Shen Yun’s performers believe in practicing self-refinement and valuing virtue so as to create art from a pure and humble mental state.

According to the program, the artists incorporate meditation into their rigorous training. They strive to live by principles like truthfulness, compassion, and tolerance.

Or it could be because the artists perform traditional art forms like bel canto and classical Chinese dance, forms that had been passed down and refined for thousands of years and believed to be a gift from the gods.

Such divinity in the arts was, for Mrs. Pelrine, “the most important thing!”

For Mr. Pelrine, it was an unexplicably satisfying experience, and even more so the second time he saw Shen Yun. He was struck by the artistry used to convey the progression of Chinese culture, and the vastness of it with the many ethnic minorities, regions, and experiences. “Satisfying is just the word that comes to mind.”

For Mrs. Pelrine it was an emotional experience.

“The depth and the truth of the beautiful message; it was extremely moving,” Mrs. Pelrine said.