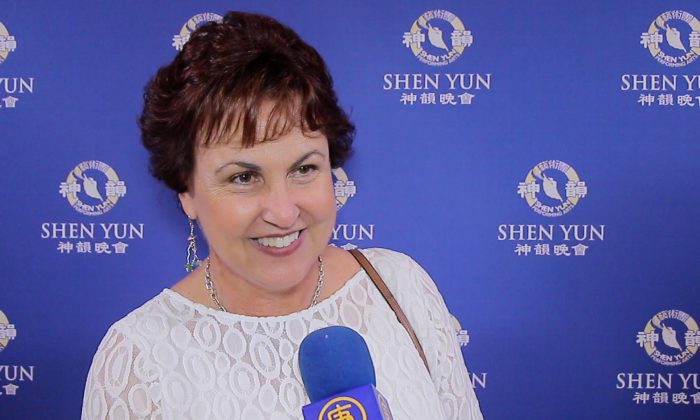 ORLANDO, Fla.—For Beverley Cox, vice president of human resources at Octapharma, just hearing the music of Shen Yun Performing Arts gave her a sense of being in China.

“It’s wonderful,” she said. “Just hearing the orchestra when it started gave me goosebumps. So I think it’s fascinating to see the Chinese culture portrayed through dance. … It’s just spectacular.”

New York-based Shen Yun travels the world each year with an all-new production of classical Chinese dance and music. Cox experienced it on March 16 at the Dr. Phillips Center for the Performing Arts.

“It’s spectacular to see the synchronicity of the dance,” she said. “The costumes are beautiful, and it’s just so well-orchestrated. It’s fantastic. I hope everyone will have an opportunity to see it.”

Shen Yun’s mission is to revive traditional Chinese culture, which was passed down and enriched over 5,000 years but has nearly been lost today.

Cox was impressed by what Shen Yun is doing to bring the culture to life for audiences.

“To experience the culture and to understand how it’s represented through dance, I think, is fantastic,” she said.

“I think you learn how diverse it is, from Mongolia to the Forbidden [City], to the desert plains, to the folklore; and so it helps you understand what a huge country China is and how diverse it is,” she said.

In ancient China, spirituality was an important part of people’s lives. Values and beliefs such as benevolence, faith, and respect for the divine were passed down through the centuries. Shen Yun aims to keep them alive today in its performances.

“Spirituality takes many forms, and I think sitting there and watching this, you feel a sense of spirituality,” Cox said. “The [animated backdrop] is fantastic, and certainly that lends itself right to being transported into the heavens and up to the moon, and so it’s very beautiful.”

She was referring to Shen Yun’s unique digital backdrop that provides scenery of China or even of celestial realms.

In modern China, the communist regime that took power several decades ago has attempted to destroy ancient Chinese culture and beliefs, such as the ones portrayed in Shen Yun. As a result, Shen Yun cannot perform in China today.

Cox found this sad, but she expressed hope that China might change in the future. She mentioned a Shen Yun dance piece in which a woman is persecuted for her faith by the Chinese communist regime.

“In the last performance where the young woman was in prison, my husband said, ‘I’m surprised that they can do that dance.’ And of course they can do it because it’s not in China. So it’s very unfortunate, but maybe at some point in the future, China will be more accepting, to bring this back and to tell all of the stories, not just a communist story.”

She believes it’s important that Shen Yun is able to tell its story.

“I think it’s critical,” she said. “Critical outside of China, but maybe even more critical inside of China, to be able to tell that story. And so I think it’s great that [they’re] traveling the country and sharing the story.”