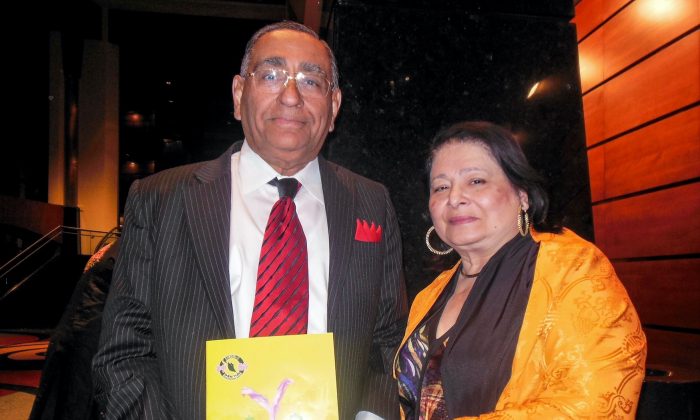 Parvez Wadia and Dilnavaz Wadia attend a Shen Yun performance at the Clay Center for the Arts & Sciences of West Virginia on March 30, 2016. (Sherry Dong/Epoch Times)

CHARLESTON, W. Va.—The snow capped Himalayas, the vast Mongolian grasslands, a Sui Dynasty pavilion, and the undersea palace of the Dragon King are just some of the settings that come to life in Shen Yun Performing Arts.

Through a digital backdrop, 400 handcrafted costume pieces, and classical Chinese dance, the scenes are alive and in full color on stage as the New York-based company aims to revive 5,000 years of Chinese civilization.

Mr. Parvez Wadia and Mrs. Dilnavaz Wadia attended a performance at the Clay Center for the Arts & Sciences of West Virginia on March 30, and were taken by the sheer beauty of the production.

Mr. Wadia travels globally for his work, and the scenery stood out to him. He is the vice president of strategic initiatives at technology company MATRIC, where he formerly served as CTO and is now responsible for global strategies.

The landscapes had been so beautiful, he said, free from the pollution that plagues many parts of China today. And the performers and costumes were excellent as well. There was also bel canto singing, and the lyrics told of faith and philosophies and good things that were universal, he said.

Shen Yun had come highly recommended by friends who had all seen and heard about it, so the couple made it a gift for Mrs. Wadia’s birthday.

“It was a feast for my eyes to see this beautiful performance, the colors, the grace, the music was so beautiful, it was such a pleasure to be here and enjoy this,” Mrs. Wadia said.

Originally from Persia, the Wadias are Zoroastrians and of a faith 4,000 years old. Mrs. Wadia said she is a cancer survivor of 25 years, and thus faith is deeply important to her.

So seeing the faith and traditions of the traditional Chinese culture—5,000 years old and divinely inspired—the couple felt they could personally relate.

When Mrs. Wadia saw the Himalayas in the background of a celebratory Tibetan folk dance, with the dancers raising their long white sleeves towards the heavens as the Tibetans would raise their white “khata” sleeves in veneration of the divine, that was a reminder.

“I always pray to the Himalayas,” she said. “So when they showed the background of Tibet … it was really meaningful to me. It was a beautiful performance.”

The beauty in the music and dance was not only of a surface level to the Wadias.

It was “very pleasing to my soul and heart and to the eyes,” Mrs. Wadia said. “All the senses.”