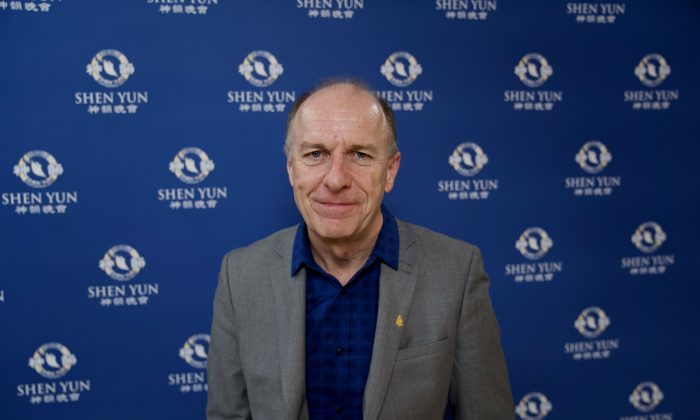 NEW YORK—Stephen Kenny, vice president at global research and advisory company Gartner, traveled to New York City to see Shen Yun Performing Arts after discovering that it was sold out in his city of Philadelphia.

Kenny, who leads a consultancy team at Gartner, had heard that the the performance was great, but it was only after being immersed in the production that he was able to experience the extent of Shen Yun’s artistry.

Shen Yun Performing Arts is the premier classical Chinese dance company whose mission is to revive traditional Chinese culture on-stage through music and dance. Consisting of around 20 pieces of dance vignettes, dance-based stories, and vocal soloists, the performance strives to give modern audiences a tour through 5,000 years of Chinese civilization.

He said his interest in Chinese history piqued after watch the stories presented through classical Chinese dance.

“It makes you want to go back and actually read Chinese history, to know where those stories came from, the myths or the legends that led to the dances.”

With 5,000 years worth of source material, the company presents stories from Chinese lore and ancient texts, which also give audiences a taste of the values and ideas lying at the foundation of China’s ancient culture. Chinese people, for thousands of years, believed in the divine, or Heaven, which informed how people behaved and viewed the world.

Virtues stemming from this belief system were emphasized across all segments of society. These included righteousness, benevolence, trustworthiness, and loyalty. Such values and beliefs continued uninterrupted in China until the Chinese Communist Party took power 70 years ago. As a result of the regime’s various political campaigns over the decades, most notably the Cultural Revolution, traditional Chinese culture has been virtually wiped out in modern China.

This is why Shen Yun is dedicated to restoring this near-lost culture to the world stage. It is also one of the reasons why the company cannot perform in communist-controlled China.

“When the announcer said that a dance group like this, performing traditional Chinese dance, isn’t dancing in its own country—there’s something wrong,” Kenny said.

The vice president was keen to bring more people next year to support Shen Yun’s mission. Kenny particularly had his mother, who was a costume designer and seamstress, and his elder sister, who is a dancer, in mind.

“Next year they’ll come,” he said.