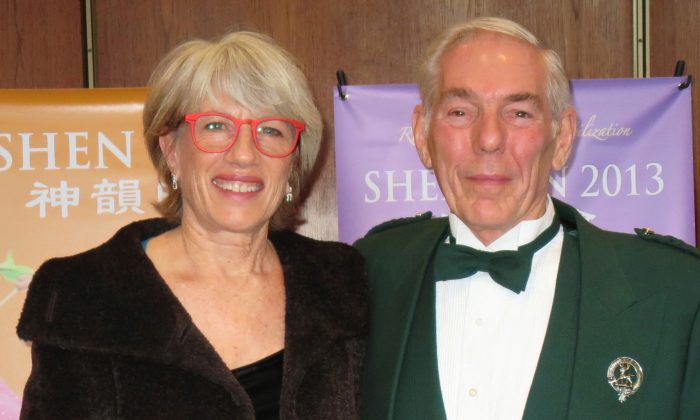 PORTLAND, Ore.—As Shen Yun graced the stage for its fourth and final curtain call of 2014 at Portland’s Keller Auditorium, Candace Scott, CEO of Mt. Angel Vitamin Company, was more than satisfied with all she had experienced.

“I thought it was beautiful,” she said. “I can appreciate the athletics and the all of the preparation they had to do to actually be physically fit to do what they did, so that was really amazing.”

Each year Shen Yun scales the globe, bringing the best of traditional Chinese culture to millions around the world. Through the finest excellence of music and dance, Shen Yun offers a rare glimpse into the rich history of the China, the Middle Kingdom.

Mrs. Scott attended the performance with her husband, Kenneth, a retired pharmaceutical chemist, who noted that the principles inherent in Shen Yun stood out to him the most.

“I enjoyed the philosophy of universal peace and compassion for all humans; that was important,” he said.

For the past 60 years, traditional culture has been suppressed to the point of near extinction in China. Through brutal campaigns and numerous rounds of persecution, modern-day China has morphed into a completely different society compared to its harmonious past.

“I thought it’s interesting because we don’t hear a lot about it,” said Mrs. Scott, praising Shen Yun’s mission of reviving China’s true culture. “I understand that there’s lots of persecution in China, and I understand that their culture has been kind of destroyed, so I think it’s really great that they can bring that to the rest of the world so we can see that.”

“It was done in a very creative way,” she added. “All parts of it.”

Also in attendance were Shanna and James Spring, a paramedic.

“It’s absolutely beyond what I expected, and I expected a lot,” said Mrs. Spring. “We wouldn’t believe the professionalism and the athleticism and grace. I just feel like a rhinoceros after I’ve watched these people.”

Mr. Spring agreed. “It’s very impressive,” he said. “They’ve got a lot of very nice dance; the choreography is wonderful.”

The couple was shocked that Shen Yun cannot be seen in China today.

“It amazes me,” Mrs. Spring said. “I can’t believe something this immense and magnificent is being suppressed. That’s a tragedy.”

As for China’s 5,000-year history, Mrs. Spring said, “We’re infants compared to the old world, the old and ancient ways.”

She concluded that she was in no way surprised by the performance, but that it “delighted me, absolutely,” she said.