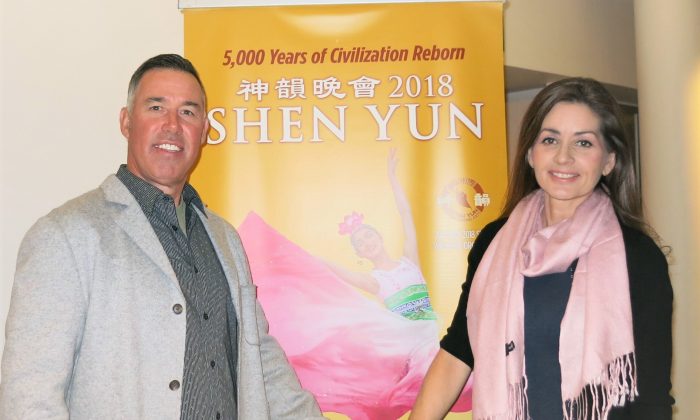 Visual artist Deprise Brescia and her friend enjoyed the Shen Yun performance at Performing Arts Center San Luis Obispo in San Luis Obispo, Calif., on April 17, 2018. Ms. Brescia is a former model and actress, who has appeared in more than 100 commercials and multiple television shows, including Two and a Half Men, CSI, and LA Law. She won Miss Venus International in 1991. (Michael Ye/The Epoch Times)

“It’s just fantastic. I would highly [recommend] anyone to come and see this.”

“[The dancers] are incredible. It was interesting for me to learn that what we consider gymnastics is actually rooted in classical Chinese dancing. I thought that was really cool.”

“I’m working on several pieces right now, so I was completely inspired.”

“[The baritone soloist] was fantastic.”

“I think [the performance] is incredibly deep. It has the spiritual core, and even the humor in things—that really beautiful humor. But it strikes a chord deep, in a good way.”

“It makes me sad that even still in China that they are being persecuted. That you cannot have freedom of religion, or your own beliefs, and that [the Chinese regime is] trying to crush out someone’s spiritual core. But I love the message that you are restored, no matter what kind of persecution you have in the physical plane. It goes beyond that, and it’s bigger than that. That’s a universal message—I thought that was really beautiful.”

“Bravo [to the artistic director]! I think [the performance] is wonderful. Keep up the good work and keep spreading that message, because I think that there are lots of people who don’t realize—in China that they don’t have that freedom—the fact that you couldn’t do this performance there.”

“I think that [the message] is beautiful, and I love that [Shen Yun was] sharing that message.”