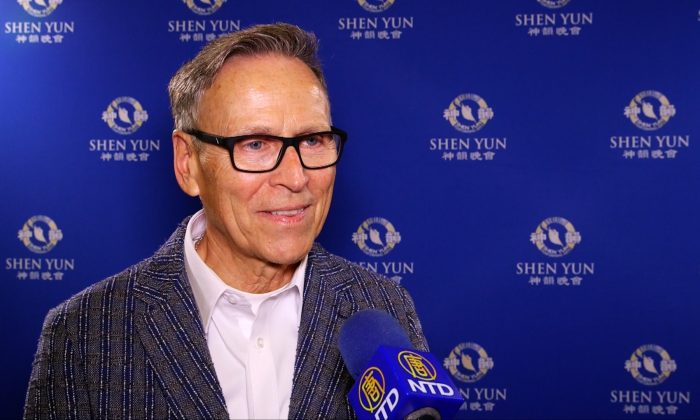 ESCONDIDO, Calif.—Ron Jessee, a visual and performing arts professor at Cal State San Marcos, saw Shen Yun Performing Arts at California Center for the Arts in Escondido, Calif., on Feb. 15. He had seen Shen Yun before, and during intermission, he shared his impressions of the latest performance.

“I love it! It’s just great! Yeah, I’ve seen it before and the melding of choreography and gorgeous music, lush orchestration is just magnificent,” he said.

New York-based Shen Yun was founded in 2006 with the aim of reviving the authentic traditional culture of China and sharing it with the world.

Jessee teaches his own students how to incorporate dance, music, theater, and visual art into the teaching of other subjects like math, language arts, and social science. His expertise on the performing arts heavily impacted his experience of Shen Yun.

“I think a live orchestra should be a part of every performance, and this orchestra is exceptional, and the incorporation of traditional Chinese instruments into the instrumentation is just fabulous,” said Jessee.

The professor said the beautiful and haunting Asian melodies of the music were a wonderful addition and represented the Asian culture well, while still providing some Western orchestral traditions. He also said the music was seamlessly combined with the dancing and acting on stage.

“I just think it melds together with the dance and the music and the singing and the acting that’s going on on the faces of the dancers, costuming. It all works together,” he said.

The dancers themselves seemed to defy gravity in their smooth movements, which seemed to instantly transition into impressive flips and spins, said Jessee. He’s very familiar with ballet, but classical Chinese dance seemed to be much more fluid, he said.

“The dancers are magnificent,” he said. “It’s just stellar to see that, a lot of coordination and the ability to … carry it off in such a beautiful way.”

Jessee explained that what makes a performance great is the multiple levels of artistry within the performance, and Shen Yun demonstrated that well. For example, the dancing and music combined with Shen Yun’s interactive digital backdrop was “just marvelous.”

“[It] really sets off the whole thing in a real fun way,” he said, referring to the way the dancers appeared to magically jump in and out of the backdrop itself.

Finally, Jessee said the strong spirituality of traditional Chinese culture was very evident from the Shen Yun performance and can be appreciated by people from any culture.

“It’s obvious that they believe in their faith, and don’t we all? If we’re people of faith, then we believe it, and we share it, and we celebrate it, and that’s certainly going on on stage right now,” he said.