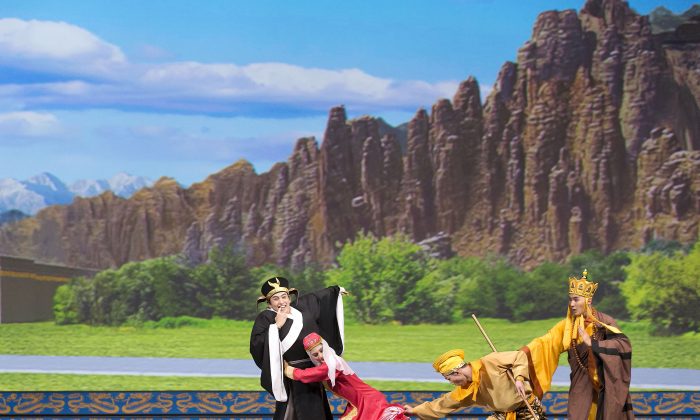 Shen Yun Performing Arts’s return to Vancouver next week has drawn congratulations and greetings from several VIPs in the area.

As the world’s only country with 5,000 years of continuous recorded history, China’s culture is a treasure trove of legends and stories. Shen Yun, which will perform at the Queen Elizabeth Theatre Jan. 22–24, brings these stories to life onstage through the universal language of dance and music.

Peter Julian, MP for New Westminster-Burnaby, reflected this in his greeting letter.

“The rich and ancient tradition of Chinese culture and art is brought to life by multi-talented performers in a stunning array of colourful costumes and state-of-the art backdrops. Shen Yun’s artists bring depth, professionalism, and energy to every performance on every stage,” he wrote.

“Vancouver is indeed fortunate to host this spectacular display of artistic storytelling at the Queen Elizabeth Theatre.”

“British Columbia prides itself in embracing the cultural diversity that makes our province so unique and interesting. We would like to congratulate you for bringing your world-class production back for us to enjoy again this year. We look forward to these annual announcements and hope that they continue in the future!” he wrote.

He wished Shen Yun, which just began its annual global tour, “a very successful year ahead and that your performances in Canada and across the world are everything that you expected and more.”

“This renowned show has garnered rave reviews, featuring breathtaking music and dance that spans 5,000 years of Chinese cultural traditions. As home to the oldest Chinatown in Canada, it is a privilege to have this wonderfully unique show and world-class talent in our region,” Helps wrote.

Shen Yun came into being in 2006 when a group of leading Chinese artists living overseas came together with the wish to revive the Middle Kingdom’s authentic traditional culture—which was almost destroyed through communist campaigns such as the Cultural Revolution—and share it with the world.

According to the group’s promotional materials, Shen Yun means “the beauty of divine beings dancing,” a reference to the belief that the Middle Kingdom’s culture has divine origins.

“Calligraphy, clothing, medicine, music, and much more were said to have been passed down from above. Chinese culture is thus known as ‘divinely inspired.’ It is this tradition that inspires every aspect of a Shen Yun performance, endowing it with an incredibly uplifting spirit,” the materials say.

Classical Chinese dance, the centrepiece of Shen Yun’s performances, is an extensive system of dance that requires performers to master intricate leaps, jumps, and spins that share a common ancestry with martial arts. Since this form of dance has an exceptional capacity to express deep emotions, Shen Yun dancers can depict a myriad of characters, ranging from ancient times to today.

“It is the perfect medium for sharing the wisdom and values of five millennia of Chinese civilization,” the materials say.

Every year, Shen Yun creates an entirely new show, with all-original choreography, costumes, animated backdrops, and music, which is provided by a unique orchestra that blends Western and Chinese instruments.

The 2016 season is the group’s tenth world tour and includes over 100 cities on five continents.